Welp, what the refs giveth, the refs take away. Something like that. And so it goes for the Cowboys, who saw their season come to end, not with a Romonobyl, but with a whimper. After a “questionable” call in last week’s wild card game against the Lions, which the NFL spent the entire week trying to triage, the brutal karma of it all reared it’s head in the ugliest way possible: The dreaded “Calvin Johnson Rule”. For those of you unfamiliar with this rule, which get’s enforced about two times per decade, here’s the wording:

I guess you could technically rule this the correct call, but I would point out that Bryant’s elbow is down first and the play should end right there. Or just from a simple eye test (you can see a better angle after the jump), this looks like a catch. OR you could conclude that Bryant went to the ground with his feet during the process of the catch, and then proceeded to do a “football play” by diving for the end zone. But what do I know? I will say this… I’m not sure Dallas fans can gripe about bad judgement here… Rick Perry is the elected Governor of Texas after all.

Joe Flacco – 28/45, 292 YDS, 4 TD, 2 INT. Flacco is one of the most successful postseason quarterbacks since he entered the league. God has a crazy sense of humor is the only conclusion.

Justin Forsett – 24 CAR, 129 YDS and 2 REC, 17 YDS, 1 TD. I’ve long since tried to associate what Justin Forsett looks like when he runs, and my finding is that he’s like a ferret. 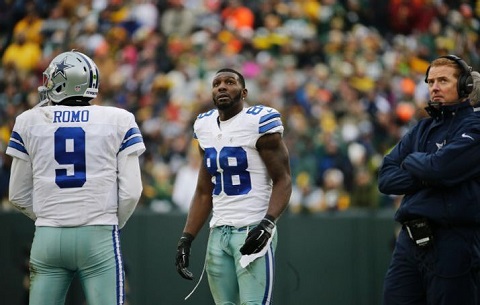 T.Y. Hilton – 4 REC, 72 YDS. It’s like I said to the editor of Hotel Industry Monthly… assign someone to cover Hilton.