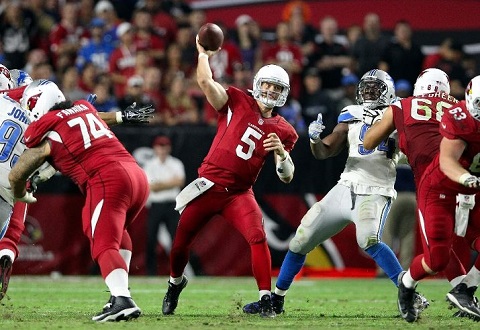 Well, that was certainly a Sunday worth remembering. Especially if you’re like me and reset the ole’ memory banks with copious amounts of bourbon throughout the day. You could say these Sunday notes aren’t just for you, but also myself… So here we are, together in this. And together, we saw some interesting things… the Bucs, the 1-8 Bucs (in case you were confused) destroyed Washington. For context, the Falcons destroyed the Bucs. And the Panthers almost beat the Falcons. So according to that, the Panthers would probably beat Washington by 200 points. In fact, with the Raiders only mustering 200 yards of total offense, I’m pretty sure if they faced off against Washington, both teams would find a way to lose. And let’s not forget the Lions having a throwback game to the Matt Millen Era. Peyton Manning thinking it’s the month of January (to be fair, the weather has me convinced of this.) Mark Sanchez returning to form. And then there’s this… the Cardinals are now 9-1. They are now three games ahead of Seattle and San Francisco, and one has to naturally wonder, how is this possible? My answer? Two quick touchdowns and leaning on your defense for three hours… this has been done before many times. So I’m just going to go ahead and write the Cardinals in as a playoff team. In permanent marker. And then prepare myself for the end of the world.

Alex Smith – 11/16, 108 YDS and 2 CAR, -1 YDS. As a special exclusive for Razzball readers, I’ve gotten my hands on Alex Smith’s playbook to get an inside look of how the Chiefs offense operates “behind-the-scenes”.

Well, what can you say? It’s a scary wasteland 10-yards beyond the line of scrimmage…

Jamaal Charles – 20 CAR, 159 YDS, 2 TD and 2 REC, 19 YDS. Out of all the NFL teams, it’s my belief that Kansas City would be the most successful team if there was no such thing as a quarterback. And the primary reason is because of this guy.

Kelvin Benjamin – 9 REC, 109 YDS, 1 TD. Actively doing his part to make sure this year’s wide receiver draft class goes down as the “craziest awesome” in the history of football. Yes, that’s actually a thing folks.

WE HAD A HURRICANE! THIS CITY NEEDS THIS FOOTBALL AS PART OF OUR HEALING PROCESS!

Jeremy Hill – 27 CAR, 152 YDS and 1 REC, 13 YDS. So I think I figured it out. Only start Hill in odd-numbered weeks and sit him during even-numbered ones.

Mike Evans – 7 REC, 209 YDS, 2 TD. How the heck do you give up essentially all of the Bucs offensive production to one player? Interesting question. Better question? How is Jim Haslett still employed in the NFL? My mother could do a better job, and that’s just based on her asking “why don’t they just cover that one guy who’s catching everything?” You’re hired!

Robert Griffin – 23/32, 207 YDS, 1 TD, 2 INT and 6 CAR, 41 YDS. I’m pretty sure that RG3 dressed up as Jeff George for Halloween and forgot to take the costume off. Hey, remember back in the day, around the time of the Mayan apocalypse, when RG3 was good? Man, those were the days…

Roy Helu – 6 REC, 57 YDS, 1 TD, 1 FUM. I present to you, the most productive player on offense. I’ll let that statement stand on it’s own. Just let it breathe there for a while.

Shaun Hill – 20/29, 220 YDS, 1 TD. I was thinking just now… “Shaun Hill beats Peyton Manning” is not a phrase that occurs in the English language ever. So we should probably step back and recognize this for what it is: history in the making.

Tre Mason – 29 CAR, 113 YDS and 1 REC, 1 YDS. As you may have known, I’ve been on the Mason Train, or Tre Train, or, even better, the Trein… which sounds like a medieval boat of some sort. Point is, I’m a believer, and he seems to be gaining yardage in a way that Zac Stacy did last season around this time. And that’s being fed the ball about 79% of the time.

Kenny Britt – 4 REC, 128 YDS, 1 TD. Ah yes, little did we know that yesterday would be the annual “Kenny Britt gains 100+ yards and scores a touchdown, and how the f*ck is my opponent starting him when I dropped him a month ago” game.

C.J. Anderson – 9 CAR, 29 YDS and 8 REC, 86 YDS. Looks to be the guy with Montee Ball re-aggravating his groin injury during his first play of the game. Or wait… is it Groin who re-aggravated his ball injury? Well, either way, this is not good news for his genitalia.

Something tells me Emmanuel Sanders forgot a bunch about a bunch of things. One of those things being this hit. He left the game with concussion symptoms and will most likely be reevaluated later today. I, of course hope Sanders is no worse for wear, but for what it’s worth, the hit seemed clean and there was no helmet-to-helmet contact. I was actually surprised, as Highlander has shown us that McLeod’s aren’t exactly known for avoiding the head…

Frank Gore – 19 CAR, 95 YDS and 2 REC, 19 YDS. Apparently, the Giants new “break, break, break, get lucky” defense seemed to work not so well against Gore. Or does that mean it did work well?

Eli Manning – 22/45, 1 TD, 5 INT. Watching Eli Manning makes me miss Jake Delhomme’s interceptions. During his press conference, Manning let it slip out that it wasn’t his “plan to throw 5 interceptions”. Yeah, no sh*t. If you planned that, you would have probably thrown 10 touchdowns.

Reuban Randle – 7 REC, 112 YDS. Clearly, Randle was tired of having his face on the local milk carton. 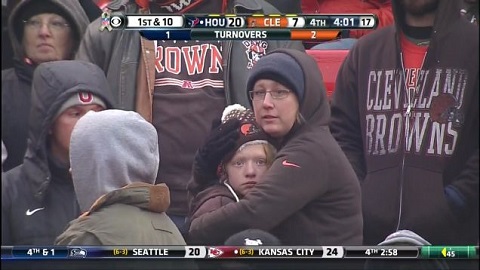 Alfred Blue – 36 CAR, 156 YDS. There’s a Blue-balls joke around here somewhere… to be honest, I’m not crazy about his talent level, and probably ranked him lower than he should have been, so naturally I’m easy troll material here. But I think the real lesson here is that the Factory of Sadness is showing signs that they are ready to open once again.

Arian Foster is still considered questionable with his groin injury, which probably means, in Foster-speak, that he’s out for two years with a disappearing oblique.

Philip Rivers – 22/34, 193 YDS, 1 TD and 1 CAR, -1 YDS. A deceptively bad game as Rivers was pressured all day long and played through a pretty bad leg-roll bruise along with an undisclosed rib injury, and that’s just from being a parent to 89 children.

Ryan Mathews – 16 CAR, 70 YDS and 1 REC, 5 YDS. We were expecting anywhere from 10-15 carries, so that wasn’t too much of a surprise.  Branden Oliver (13 CAR, 36 YDS and 1 REC, 3 YDS) will still get enough volume have some staying power, the Danny Woodhead role if you will, but Mathews looked real good and the offense will go through him from this point until he gets injured again. In about five minutes.

Derek Carr – 16/34, 172 YDS and 2 CAR, 0 YDS. Never underestimate the power of an arr. Whatever that means. Maybe he’s a pirate. All that should matter is that he’s showing enough competence for the Raiders to derp their first overall pick on a non-quarterback. Get yer popcorn ready.

I’d love nothing more than to write about the highlights in this game, but there weren’t many. So we’re going to have to get creative. Let’s start with…

Then you have, um, well Michael Floyd (2 REC, 54 YDS, 2 TD), who made me realize this was probably the wrong week to stop sniffing glue.

And Calvin Johnson (5 REC, 59 YDS) playing as “some sort of Transformer, yet to be determined”.

In fact, the most notable feat was Joique Bell (14 CAR, 85 YDS and 3 REC, 30 YDS) punching through the Cardinals defense like Andy Reid bursting through the wall of a Kansas City rib joint.

Ahmad Bradshaw – 3 CAR, 15 YDS and 4 REC, 7 YDS. Left the game in the fourth quarter with a leg injury. That’s okay man. I didn’t need those points. I wanted to lose this fantasy match-up with huge playoff implications. Totally bro. High-five!

Trent Richardson – 7 CAR, 0 YDS and 1 REC, 21 YDS. T-rich looked rangy and agile last night. When it comes down to it, on a critical fourth-and-one, you want this guy to make it a fifth-and-three.