Oh wise and powerful Elder Gods, I beg of you to release me from this bondage of constant anguish that my fantasy players have brought down upon me this season. For you, I would give my left nut and sacrifice my best friend and prize chicken, Beatrice, if you so asked me to (please do not). The pain, the pain… I cannot bear it much longer. But this isn’t all about me though. My readers still have hope. Do not punish them, oh Gods, for they don’t deserve your vengeful scorn. They pray to you, the same as I. Bless them with bountiful treasures of fantasy glory.

With that being said, I do own Jerick McKinnon in most of my leagues, and that, my friends, is a very good thing. Of course, it’s because I owned Adrian Peterson, so I suppose that takes some of the luster off of it. Either way, McKinnon must be owned and ridden like that Thai girl (or boy?) rode me one in that fateful night in Bangkok. His explosion is legendary, and watching him run in the open field is an event of unsurpassed beauty. Running for over 100 yards on a Buffalo team that was previously giving up only 2.8 yards a carry is no simple feat. Matt Asiata… he’s no longer relevant. We’ll always have that 3 touchdown game, Matt, and I thank you kindly for the memories. McKinnon’s in line for another special performance against Tampa Bay this week, and I suggest you place him in your fantasy lineups.

Chris Ivory – Well, would you look at that. Give Ivory a healthy amount of carries, and he produces like a number one running back. Shocker. Unfortunately for us, the addition of Percy Harvin (FML) makes this offense even more difficult to predict than that dude/chick from It’s Pat‘s sexuality. Still, I wanted to give my homey Ivory some major kudos, because he deserves so much better than he’s received.

Denard Robinson – D-Rob won’t surpass 126 yards again on the season, but still, this was a major accomplishment for the former Michigan QB. Storm Johnson can now be dropped like a bad bag of dope, and you should probably forget the name Toby Gerhart entirely.

Golden Tate – Seattle Seahawks fans miss Tate like Khloe Kardashian and that crack-infused long-D from Lamar Odom. Tate was deemed expendable with a healthy and heavily paid Percy Harvin around… hold on a minute while I repeatedly bang my head on my granite counter tops… okay, I’m back. Tate needs to be in your lineup every week at this point, even when Calvin comes back. On a positive note for Hawks fans, the better Tate does, the higher the comp pick Seattle receives. Yaaaaay. That’s like finding a cubic zirconia ring in a steaming pile of cow dung. Better than nothing, I guess.

Andre Ellington – The coolest part about Ellington’s special day was him pulling himself from the field after he single handedly took the Cardinals down to the 4 yard line. He wanted to reward the legendary Stepfan Taylor for taking all of the reps in practice last week… ARE YOU F*CKING KIDDING ME?!?!? Either way, Ellington’s pre-season injury scare is firmly in the rear view mirror, and I expect some more monster outings in the near future.

Ronnie Hillman – Montee Ball could be seen panicking on the sidelines with each big Hillman play against a depleted 49ers defense. Blame him, I do not. Ron Ron juice has been flowing like wine the past couple of weeks, and I fully expect him to remain the starter, even when Montee Python the Holy Frail, returns.

The Magician Trilogy– You know your boy Beddict is scholar when it comes to the Elder Gods and other mystical art forms, so this trilogy was right up my alley. I randomly grabbed the first book at a Barnes and Noble (These still exist) before my fishing trip to Canada a few months back, and was quite delighted with what I discovered. Author Lev Grossman delivers what some would call a Harry Potter for adults. I stopped reading those books once I realized Harry was never going to drill Hermione Granger. There’s enough piping in this series for all, so feel free to dive in. Beddict approved.

Ben Tate – Over the past two seasons, Ben Tate has bent me over a barrel and shown me all 50 states at least five or six times. My main man, Paul Posluszny, absolutely owns his soul, and he had to crush my soul one last time before tearing his pectoral muscle. Double kudos to him as I’ve always thought ‘Pos’ one of the most underrated backers in the NFL. I would have added Brian Hoyer on this disgrace list, considering he’s the worst starting QB in the NFL, but he’s simply not relevant enough. Anyway, Tate is dead to me, but he still holds value for those of you willing to risk inserting him in your lineups.

Jay Cutler – Cutler is the Ben Stiller of fantasy football quarterbacks. From time to time he drops an absolute gem, a la There’s Something About Mary, Meet The Parents,  Tropic Thunder, Dodgeball: A True Underdog Story, and maybe the most underrated performance of all time in Heavyweights. [Jays’s Note: Where’s Flirting with Disaster?] Buuuut then he’ll shat out a Mystery Men, the disgraceful, Duplex, or the even more pathetic and criminally horrific Envy with Jack Black. Last week’s game was a dud of epic proportions, as he produced single-digit fantasy points and let down not only the entire city of Chicago, but his thousands of fantasy owners as well. 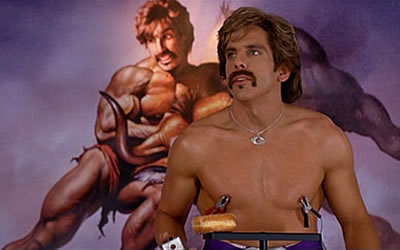 Giovani Bernard – Maybe the most disappointing performance of the week, considering we were all expecting a heavy dose of G.B. against a Colts defense I still have no respect for. Maybe I should alter my viewpoint on that subject?… or maybe Bernard should sack up and deliver fantasy greatness each and every week like a good boy. Tragic, just tragic.

Vernon Davis – Vern needs a backiatomy, and his fantasy owners are hoping Dr. Kevorkian is performing the surgery. “Know what I mean, Vern” has suffered what might be the worst two-week stretch of his career as far as dropping balls are concerned. Let’s hope it comes to an immediate stop, for I can’t witness many more of these tragic performances.

Larry Fitzgerald – Father Time is undefeated, and Fitz has been fighting a losing battle for almost half a decade (sounds longer than three years). Michael Floyd and even John Brown seemed to be the preferred targets at WR for veteran QB, Carson Palmer. This situation reminds of how Sylvester Stallone somehow keeps getting movies green lit, even though every single one is an epic fail (do people still say this?). Somewhere in a Hollywood alley, Christian Slater is bawling his eyes out.

Thank you for joining me for another radical edition of Disgrace/Delight. As per usual your comments and questions will be responded to below. It’s something I look forward to and all of your input, whether positive or negative, is much appreciated. Enjoy bantering with Beddict (Me)? Follow me on Twitter at @Tehol143. Have a fabulous week, ya’ll.

P.S. My Thursday night pick for “Betting With Beddict” is the Denver Broncos (-7.5) at home against the San Diego Chargers. I will be buying half a point to ensure my success but that’s up you. Denver looks unstoppable right now, and I think the Broncos are going to give the Chargers the kind of lashing that would make Adrian Peterson proud.