Maybe you follow me on Twitter and listen to the Razzball Fantasy Football Podcast hosted by Donkey Teeth and myself. If that’s the case, you may have seen or heard these numbers. However, if following me on Twitter and listening to a podcast is too much, here are some fun numbers to look at for the upcoming season and dynasty purposes.

Dynasty startups are under way. If you’re thinking about taking an older TE or WR early in the draft, this might give you a better understanding of what you’re signing up for with that pick.

At TE, since the merger, there have been 3 players that have 1000+ yard seasons after the at the age of 31 or older. The list is Tony Gonzalez, Delanie Walker, and Greg Olsen. If we move that to the age of 32, it’s a small list. ONE. One TE (Tony Gonzalez) has more than 1000 yards at the age of 32, and no TE older than 32 has ever reached that mark.

Certainly the TE position is more of a receiving threat in the modern approach, but age has not been kind at the position. Maybe it’s due to the physical nature? Or just natural aging? But Father Time doesn’t get cheated very often.

All I’m saying is, if you’re looking at Travis Kelce in the early rounds of your dynasty startup, know that his window is shrinking. If you’re already a Kelce owner, it may be time to move him at his current value. If you’re trying to trade for Kelce, feel free to use this stat, and if the owner won’t budge on his asking price, go find a younger TE to trade meaningful pieces away to fill the position.

If you’re looking at the TDs, there are 5 TEs that have scored 8+ times in a season after the age of 32. Even that skill seems to wane. I want to be clear, not trying to say he won’t be useful from here on out, but true elite numbers are likely on the decline in the next couple of seasons. 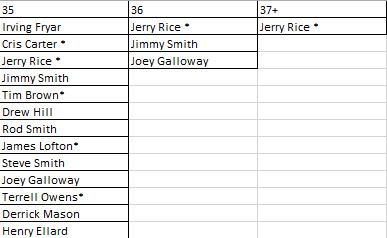 So, Julio being a future HOFer, maybe he makes it to the 33/34 range, but asking for anything beyond 34 is the exception rather than the rule.

Not a CEH fan boy. I’m on the other side trying to quell the hype. Start by saying, I acknowledge the potency of the Chiefs offense and what that could mean. I did a pre-draft profile on CEH, and spoiler alert, he was my 5th ranked RB coming into the draft.

In Andy Reid’ coaching history, there is only one RB that was consistently targeted over 100 times and/or had 70+ receptions in a year, Brian Westbrook. You’ve likely heard some comps that link CEH to Westbrook, but I don’t see it personally.

Westbrook was stronger, a better receiver, route runner, and in between the tackles back. Also, in the seasons where Westbrook received 100+ targets, the main receiving threats in the offense were Reggie Brown and Jason Avant.

If we look at Reid’s time in KC, the outlook is worse. Only a single RB over Andy’s 7 years in KC has had over 70 targets and receptions, in a season (Jamaal Charles 2013). BTW, the Chiefs wideouts that season were Dwayne Bowe, Donnie Avery, and Dexter McCluster. The next closest is Kareem Hunt with 63 targets in 2017.

The argument that Reid hasn’t had receiving backs, well, that’s just wrong; with a list including Lesean McCoy, Jamaal Charles, Kareem Hunt, and Brian Westbrook. Each of those backs was a better receiver (and runner) than CEH. So, betting on CEH to break out based on gaudy reception numbers is betting on the exception, not the rule looking at Andy’s history with RBs in KC.

More like Raheem Must-start (terrible over used joke, I’m sorry) at the end of last year, but let’s take a look at the history of RBs at age 28. First, let me say that Mostert has a grand total of two 100+ yard games in his career, and they were both in 2019. Even last year, he wasn’t targeted more than 4 times in any single game, which only happened once.

Since 2001, only two other RBs have accomplished this feat, Carlos Hyde last year and Justin Forsett in 2014. To recap, 2  in 2000 and 2 since then. You’re welcome to bet on the Shanahan offense, and I wouldn’t fault you for it, but just know, once again, you’re betting on the except… you know.