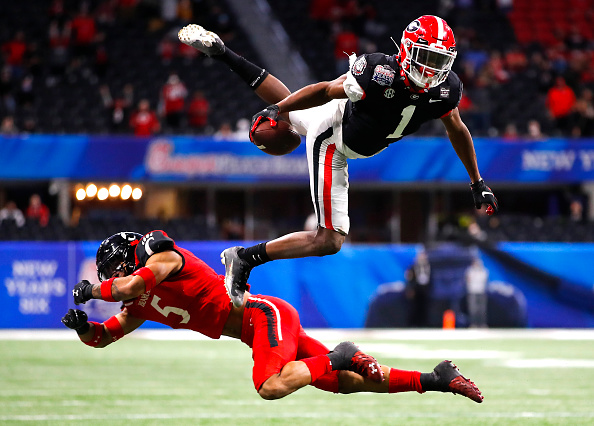 Considered a potential future first-round pick as far back as 2019, Georgia wide receiver George Pickens ultimately ended up being selected by the Pittsburgh Steelers in the second round of the 2022 NFL Draft, as the fifty-second player off the board overall. Before joining the Bulldogs, the former five-star recruit originally attended Alabama’s famous Hoover High, winners of eleven state championships since 2000, the most recent coming in 2017, a season in which Pickens earned All-State recognition (other notable graduates include Marlon Humphrey, Chad Jackson, and John Parker Wilson.)

Pickens established himself as Georgia’s leading receiver as a freshman in 2019, catching passes from Jake Fromm in James Coley’s offense and finishing with a line of 49-727-8 (14.8); during the season, he ended up being suspended for half of the contest against Georgia Tech for a violation of team rules. Upon his return to the field in that game, he ended up getting into a fight and being suspended for the first half of the following game against Louisiana St., incidents that would later concern some prospective suitors during the pre-draft process. Pickens didn’t have quite as impressive a stat line as a sophomore in what was a truncated season in a Georgia offense that featured both J.T. Daniels and Stetson Bennett as starting quarterbacks and which was now coordinated by Todd Monken. Unfortunately, Pickens ended up tearing his ACL in spring practice last year, returning for the last four games of the season but catching just five passes during that span. Although medical concerns relating to his knee negatively affected his stock, he nonetheless decided to forego his final season of eligibility and declare for the draft.

Pickens was arguably able to rehabilitate his stock to some extent during the pre-draft process, recording an excellent Relative Athletic Score of 9.36 and answering questions some had about his speed and explosiveness by running a 4.47 forty-yard dash which included a 1.5-second ten-yard split, ranking ahead of 97.6% of peers. That said, pre-draft rumors suggested that some teams may have concerns about Pickens’ character and medicals, and those issues may have outweighed his athletic testing in some war rooms. Evidently, the Steelers either felt Pickens’ upside outweighed the risks, or did not share those concerns. He becomes the fifth Georgia receiver to come off the board within the first three rounds since 2006, following Mohamed Massaquoi in 2009, A.J. Green in 2011, Chris Conley in 2015, and Mecole Hardman in 2019. Undoubtedly, the Steelers are hoping their new wideout can give them similar production to another Bulldogs wide receiver who Pittsburgh drafted on the second day: Hines Ward, who was chosen in the third round back in 1998.

According to an excellent breakdown provided by Steelers Depot, hitches and go routes accounted for 78 of Pickens’ 139 targets in college (56.1%), as well as 48 of his 90 catches (53.3%). While he ran other routes – outs, back-shoulder throws, slants, posts, crossing routes, comebacks, and so on – he caught fewer than ten passes on each of those patterns. While his route tree wasn’t the most complex, and he rarely lined up in the slot (something that might have helped him get on the field more as a rookie), Pickens does do some things well as a route-runner. He’s pretty efficient with his releases at the line of scrimmage and shows the toughness to work through physicality as he runs patterns. At the route stem, he sinks his hips and snaps off at the stems to create throwing windows for his quarterback. Against zone coverage, he shows the ability to settle into soft spots and help his quarterback find easy completions. He was a legitimate deep target in college and many of his routes succeeded because he could credibly threaten defenses downfield.

Ball skills are another strength of Pickens’ game. He tracks the ball well over his shoulder and does a good job of hiding his hands until the last second, showing impressive body control and sideline awareness. Although he’s on the thinner side, he presents quarterbacks with a relatively big target because of his overall length and flexibility. Perhaps most impressive of all, he has strong hands, solid technique as a receiver, and shows excellent concentration to come down with contested catches. Making catches in traffic was necessary a little bit too often in college because he has some work to do in terms of learning to stack cornerbacks more consistently, and in terms of using his body to shield defenders from the ball. Inefficiencies in those areas served to increase the overall difficulty of some of the catches he made in school, and refining his technique further should be a priority for Steelers wide receivers coach Frisman Jackson, who Pittsburgh sent to work out Pickens leading up to the draft.

The Steelers lost JuJu Smith-Schuster (18.9% of snaps), Ray-Ray McCloud (45.9%), and James Washington (40.9%) in free agency, so the chances were high that they’d be looking for another receiver to join Diontae Johnson (84.2%) and Chase Claypool (70.2%) in the offense. The three receivers lost totaled 80 catches last year, but for under 700 yards and just two touchdowns. Calvin Austin (fourth round) is probably a more direct replacement for McCloud, but Pickens could potentially carve out a much more significant role, as the snap counts of McCloud and Washington would have likely been lower had Smith-Schuster not been injured (all three of Pittsburgh’s top receivers caught at least 60-800-7 in 2020.) Furthermore, the Steelers struggled to throw go routes last year, so Pickens could potentially establish himself as the team’s deep threat if he beats out recently-signed Miles Boykin. Whether or not the deep ball will be an integral part of Pittsburgh’s offense remains to be seen, as Mitchell Trubisky is inconsistent at best as a deep thrower; Kenny Pickett ranked in the top six among college quarterbacks in deep yardage last year according to PFF, although he looked better at throwing over the middle than down the sidelines, where Pickens produced most of his output in college. It’s not beyond the realm of possibility that Pickens has a fairly big role in the offense as a rookie.

Nice write-up! Love the in-depth detail from high school all the way through to what his NFL outcome might be.

Thanks for the feedback. Are you considering George Pickens in any of your drafts?

Bobby, 100%. If this draft was taking place last year, Pickens would have been a top 2 pick. He was being heralded by multiple fantasy sites at that level. And it made sense to me based on what I saw (not that I’m even close to a pro at scouting). Then an injury happens. The way I see it, Pickens lovers get a discount (I got myself some Chase discounts last year in a few leagues when he was dropping passes pre-season).

I’ve been happy to trade down this year if I don’t have the 1.01 (Breece seems to me the only automatic, at 1.01, this year). That way, I can get 2 or even 3 draft picks for the price of a 1.02 or 1.03. Then making sure one of those late first round draft picks ends up being Pickens. This article just solidified his potential to me. I think he’s going to be really good.

I’m all over Pickens, especially at his current discount.