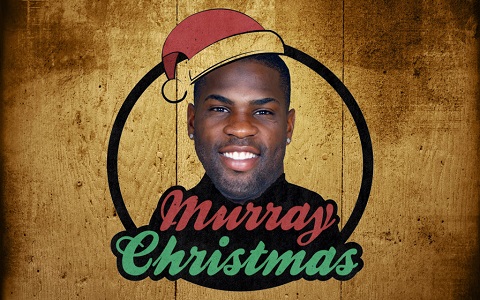 T.Y. Hilton did not play on Sunday due to hamstring injury. LeGarrette Blount sat out with a bum shoulder. And in San Diego, Ryan Mathews was inactive for the second straight week with a sore vagina. Oh wait, that was last month… it was an ankle this time. It’s hard to keep track with him anymore. Besides, who cares about the Chargers? Just kidding Jay! I mean with Matt Kemp, Justin Upton and Wil Myers joining the Padres, aren’t they the team to root for now in San Diego? That outfield sounds like the ghosts of fantasy baseball outfield MVPs of the past, present and future!

But what about the NFL’s leading rusher? There’s no way he plays one week after breaking the fourth metacarpal in his left hand, right? This is an injury that required surgery, a protective plate and 8 screws and takes at least 6 weeks to fully heal. Well if you ask me, I think DeMarco Murray had himself on his fantasy team and with the championship on the line this crazy son of bitch decided to lace ’em up and play this weekend. I once played beer pong (aka beirut) with a sprained wrist, but that was because I was playing for the Hoboken League Championship. Back to Murray. Despite common sense screaming in his face to sit this one out, he forged ahead, put on a protective pad and made a run at Emmit Smith’s single season Cowboys rushing record. To be honest if I owned him I’m not sure I would have started him. But to those that stuck with him, I hope 58 yards and a touchdown were enough to keep you from regretting the decision.

Here’s a list of players that were likely not started in any Super Bowl matchups. If you were forced to start any of these guys, you were not happy about it. At least until the game was over. This lineup which combined for 181.26 points in Yahoo! half-point leagues would most likely have brought you home that championship that you’ve spent the last 16 weeks consuming yourself with. And to think you could have picked up this entire team off the wire. Wouldn’t that have been some sh!t…

With the season now over (sorry I don’t recognize leagues that include week 17), I’m not going to tell you which of these players are rosterable. Instead I am going to give some of them their five seconds of fame.

Teddy KGB(ridgewater) and his damn Oreos. Mikey could have gone on all night busting him up. For years there have been rumors about a Rounders 2. Is that ever happening? Come on Matt Damon. Stop making movies like Elysium and get this thing in production. With 259 passing yards and 2 touchdowns Bridgewater made Andrew Luck and Peyton Manning look like Johnny Flag Football.

Leon Washington? Isn’t he about as old as George Washington? While he did have 6 rushing touchdowns for the New York Jets back in 2008, before this year he hadn’t scored a touchdown since 2012. This weekend he got his second of the season. Lee-ON!

Does anyone know Mark Curry? Here’s a hint. He plays a former NBA player who becomes a teacher and basketball coach at Oakbridge High School in Oakland, California. Okay, fine. I get it. No one gives a sh!t. Like anyone that spends time with Riley, they are just “Hanging with Mr. Cooper”. Riley managed to catch 5 of 7 targets for 53 yards and 2 touchdowns. Nothing like saving your best game for the last game of the fantasy season. Now go get a haircut.

Holy crap, it’s Mitch-a-palooza! When did the Godfather sign with the Seattle Seahawks? Is Frank the Tank next? Luke Wilson lit up the scoreboards on Sunday night on just 3 targets. He caught all 3 for 139 yards and 2 touchdowns. Combine this performance with Eddie Royal’s and somehow there has to be a witty line about The Royal Tenebaums. No? Okay.

Congratulations to everyone that was able to take home a championship this season and thanks to everyone that took the time to read through my weekly nonsense. Best of luck in the offseason and may your fantasy baseball leagues be successful. Unless of course you are in my league. Happy Hanukkah, Murray Christmas and a Happy New Years!!!