Last week The Dillon Panthers, my team in the Razzball Writers League, scored 168.64 points, making quick work of Jay’s team and elevating me to an astounding 6-0 record. Out of all the RCL’s, there are currently only thirteen undefeated teams remaining. Yours truly is fired up to be a member of that list and will look to keep rolling this week. But before we step ahead into the future, let’s jump in our DeLorean DMC-12 and go back in time to last weekend and see what lineup would have been strong enough to have knocked me out of the ranks of the unbeaten. 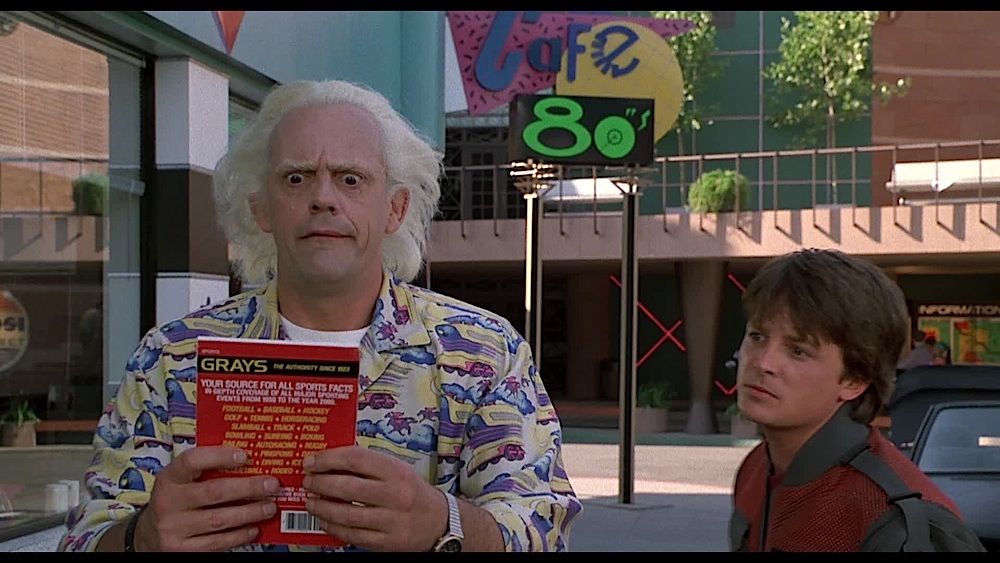 When asked for a list of players that would have outscored 168.64 points, Biff Tannen opened his Gray’s Sports Almanac and muttered, “How about these buttheads” as he rattled off the following list of players. “Together they combined for 173.81 points. Now why don’t you make like a tree and get out of here.”

Bryan Hoyer – Hoyer was 24 of 36, throwing for 293 yards, 3 touchdowns and zero interceptions. On the season he has an 8:2 touchdown to interception ratio. Peyton Manning has less touchdowns (7) and more interceptions (4). Yet, unsurprisingly you should pick Manning over Hoyer 100 out of 100 times. What’s more is that you shouldn’t even own Hoyer unless you are in a very deep two quarterback league and one of your quarterbacks is on a bye. Even then, it would be a matchup based decision.

James Starks – Somewhere in Wisconsin Eddie Lacy is receiving a raven which reads “Starks is coming”. Lacy owners that do not own Starks have reason for concern. Or do they? Last season Lacy had nearly an identical crappy start and went on to finish with over 1200 yards rushing and 9 TDs. On 10 carries Starks rushed for 112 yards and a touchdown. That’s an average of over 11 yards per carry. He even had a receiving touchdown. While I wouldn’t get too excited about Starks, I certainly wouldn’t mind owning him right now. If I did, I would likely be trying to package him in a trade to the Lacy owner for an upgrade at another position. And if you can buy low on Lacy, I would be all for that as well.

Ronnie Hillman – Holy C.J. Anderson sucks batman! Preseason I wavered between Anderson and Joseph Randle as my pick for bust of the season, and ultimately went with Randle. I thought he might be a bust, but not this much of a bust. This has opened the door for Hillman. Last week he carried 20 times for 111 yards, marking his second 100+ rushing game of the season. In 67 carries Hillman has 323 yards. In 68 carries, Andersuck has 180! Hillman is the own in Denver. It’s all down hill for C.J.

Lance Moore – Lance makes this list mostly because his ownership is at 0 percent. While he did have 5 catches on 6 targets for 106 yards and a touchdown, I am not expecting any “moore” out of him than that. He is averaging just 4.7 targets, 3.1 receptions and 38 yards per game. Those stats sound about right for Lance. Next…

Stefon Diggs – Now this is a guy I can dig. I considered the title “Nice Diggs”, but then realized I could kill two birds with one stone with the chosen title. I was high on Diggs coming into last week as I had him in all of my DraftKings and FanDuel lineups. And it paid off with 7 catches on 9 targets for 129 yards. If only he could have scored a 6 pointer. He’s put together two nice games so far and I am interested to see where he goes from here. If you have room, I think he’s worth a stash.

Benjamin Watson – With 10 receptions for 127 yards and a touchdown Watson is going to get a lot of attention this week among fantasy footballers. Every time he caught the ball I found myself annoyed that it wasn’t Brandin Cooks, whom I drafted to be my top wide receiver. Even with such an all star performance I have no interest in Watson. Next week it will be someone else in New Orleans with these numbers. Please let it be Cooks!

Torrey Smith – 96 yards and a touchdown sound like pretty good numbers. Most of us would be happy to get those stats from our flex. But when you take a closer look, Smith’s performance wasn’t much to get excited about. He only caught 3 of 6 targets, and one of those catches was a 76-yard touchdown. Take away that big play and you’re left with 2 catches for 20 yards. I think I just threw up a little. Anquan Boldin is the pass catcher I’m taking in San Fran.

Since I will never be promoting a kicker or DST, I am no longer going to be saying much about them in this post. Unless, of course, the kicker’s name is something like Mike Hunt or Ben Dover. In the meantime I hope you see that every week it is possible to find plenty of value on your waiver wire. Just look at this lineup that put together 1.21 Gigawatts jolting anyone that had the vision to start them into the winners circle and leaving their opponents saying “Great Scott!!!”

For those of you wondering why all the Back to the Future references, take a look at today’s date and do the math. October 21, 2015