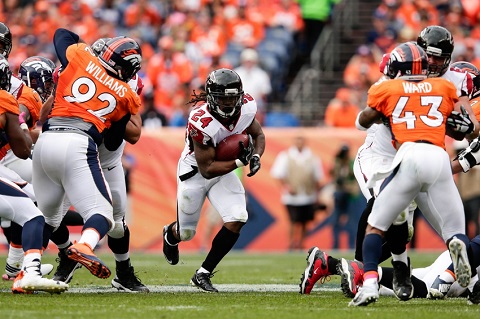 Week 5 saw some dominant performances by running backs we were counting on, with David Johnson, Ezekiel Elliott, DeMarco Murray, Jordan Howard (told you!), and the Devonta Freeman/Tevin Coleman two-headed monster delivering for their owners. But this week also saw its fair share of disappointments, both from new faces fantasy owners were taking chances on and from running backs drafted to be fantasy starters.

If you picked up Wendell Smallwood, Kenneth Dixon, or Orleans Darkwa and threw them right into your starting squad, you paid for it with essentially a blank spot in your lineup. If you started regulars such as Jeremy Hill, Isaiah Crowell, Matt Jones, or Lamar Miller, you didn’t do much better. This second list of names hurts a bit more, though (except for maybe Jones), because you likely plugged them into your lineups without a second thought. On the plus side, you can look forward to now having that second thought for the rest of the season.

Cameron Artis-Payne bounced back on Monday night after a certain Razzball contributor lamented his performance last week. Artis-Payne scored two touchdowns and rushed for 85 yards on 18 carries, but both Cam Newton and Jonathan Stewart, so our days of starting CAP and crossing our fingers are likely over, at least until Stewart gets hurt again. Don’t drop CAP just yet, but you can start cracking your fingers.

If you’re a Devonta Freeman or a Tevin Coleman owner, you successfully survived a matchup against the Denver Broncos. I guess the Atlanta Falcons did, too. Both backs ran all over the place on Sunday, and they combined to put up almost 300 yards. Freeman did most of his damage on the ground (88 yards and a touchdown), while Coleman caught four passes for 131 yards and a touchdown. There is, however, one small concern here for Coleman owners: he only got 10 touches to Freeman’s 26. Both running backs are must-starts going forward, but Coleman owners would like to see that touch percentage tilt back in the other direction.

Jacquizz Rodgers was the next man up for the Tampa Bay Buccaneers on Monday night, with Charles Sims being ruled out and placed on injured reserve. The only thing more surprising than Rodgers’s production was his workload, as the Bucs gave him 35 touches on the night. He made the most of them, too, with 129 total yards on 30 carries and five receptions. The bad news here is that the Buccaneers are on a bye in Week 6, and Doug Martin will likely be back for Week 7.

Ladies and gentleman, Jordan Howard. Jordan Howard, this is everybody. Let’s get acquainted because Jordan Howard probably isn’t going anywhere, even when Jeremy Langford is healthy. Howard had his second good week in a row, and this one was even better than the first, as he racked up 163 total yards, a 7.4 YPC, and a receiving touchdown on 19 touches. Even with Howard and 400 yards passing from Brian Hoyer, the Bears still managed to lose. We all just have to hope that they keep giving Howard the ball 20 times a game once Langford comes back.

I have covered Matt Forte almost every week since the beginning of the year, and Week 5 was his third straight poor showing. Bilal Powell handcuffers, rejoice! While Powell only carried the ball four times for 10 yards, he did add six catches for 41 yards. For Powell owners who started him in a pinch because of bye weeks, that is really all you were looking for. While Forte was on pace to shatter running back touches records after the first two weeks, he had only 14 touches this week. Maybe the Jets realized that pace was unsustainable, or maybe the game scripts have just favored the pass-catching Powell more, but Forte’s production has plummeted while Powell has returned to fantasy relevance.

The Oakland Raiders are another topic we have discussed ad nauseam in these articles, and they seem to always keep things interesting. The Raiders backfield was already shaping up to be a strange committee every week, and Latavius Murray missing this week’s game only made it weirder. DeAndre Washington was expected to start in place of Murray and be in line for an increased workload, but he and Jalen Richard both received 14 touches. And if that isn’t strange enough for you, 11 of their 28 touches were catches, and fullback Jamize Olawale grabbed seven touches and a goal-line touchdown. If you started Washington or Richard in place of Murray, you were likely satisfied with the moderate production you got in return, but this backfield is as unpredictable as they get.

The Baltimore Ravens, another team with a messy backfield, fired offensive coordinator Marc Trestman, and they promoted Marty Mornhinweg to the position. What that means for the running back production in Baltimore is not immediately known, but Mornhinweg is known more for passing offenses than rushing ones. Terrance West rushed the ball 11 times for 95 yards (8.6 YPC) on Sunday, which makes you wonder why he didn’t get the ball more against one of the league’s worst rush defenses. But hey, maybe that’s why Marc Trestman got fired…

My LORD, David Johnson is a bad man. Coming into this year, I was skeptical of taking Johnson at the top of fantasy drafts because of the small sample size and because I normally prefer an elite wide receiver over a running back, whenever possible. I am no longer skeptical.

Justin Forsett signed with the Detroit Lions on Tuesday. I’m not sure he will have much immediate fantasy football relevance, but they will likely start to work him into the rotation sooner rather than later. With Ameer Abdullah on injured reserve and rookie Dwayne Washington missing last week with an ankle injury, the Lions relied on Theo Reddick, Zach Zenner, and even wide receiver Golden Tate in the backfield. Forsett left a crowded backfield in Baltimore for another one in Detroit, especially once Washington comes back.

As I mentioned a couple weeks ago, you can own Wendell Smallwood but shouldn’t start him. This past week is why. Until we hear differently, the starting job is Ryan Mathews’s to lose, and Smallwood is too risky of a play until we know that he is going to get touches (he had zero on Sunday). The same is true for Kenneth Dixon. Stash him if you have the roster spots, but don’t risk him in your lineup right now. That should be obvious for those two after this week, but this is exactly what I was talking about a few weeks ago.