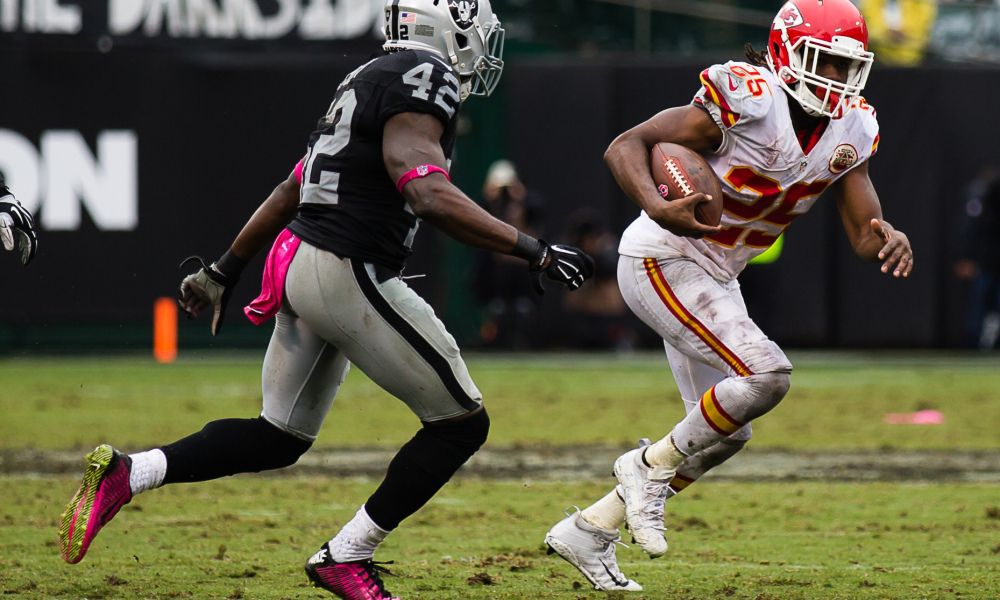 Well, we all saw that coming. We all knew the Miami Dolphins were going to smash the Pittsburgh Steelers, and we all knew that they were going to do so by riding Jay Ajayi and his 204 rushing yards and two touchdowns. We all knew that, even with Arian Foster coming back, Ajayi would get 25 carries and, oh, you know, rattle off 8.2 YPC on the day. We all knew Jay Ajayi, sent down from above by his Heavenly father to be the savior of the Dolphins in the fifth round of the NFL draft last year, was going to get more touches than any running back not named Terrance West, Ezekiel Elliott, Lamar Miller, or Melvin Gordon.

And, of course, we all knew that Spencer Ware was going to get 26 touches on 40 snaps to Jamaal Charles’s 11 on 15. This was the first time all year that many Jamaal Charles owners started him, as he was finally considered healthy enough for a full workload. So, of course, Ware dominated the snaps and touches. But we all knew that was going to happen. That’s what makes this so easy!

Now, if you are this far into the article and haven’t been able to detect the sarcasm, please stop reading. We cannot help you here. You have bigger problems than fantasy football, and you will not find the answers here. You will likely only find more questions and a Simpsons referenced forced into here somewhere (this one doesn’t count).

For the rest of you, we have work to do. This was another strange week for running backs, as I so subtly alluded to above, and we have a number of question marks at running back going forward.

As mentioned in the opening rant, two of the bigger stories in the AFC were the performances of Jay Ajayi and Spencer Ware. Both Ajayi and Ware were supposed to see dips in the touches and production with Arian Foster and Jamaal Charles returning, but both instead turned in great games. While we were not expecting much from Foster this week, many owners thought this would finally be the week that they could safely start Charles. And while Charles did end up punching in a touchdown to salvage the day, Ware’s workload is concerning.

For the second week in a row, Isaiah Crowell disappointed and yielded production and touches to Duke Johnson. Crowell had been a surprisingly solid start through the first four weeks, but he seems to have returned to Earth. The Browns do not inspire confidence in anyone, so you can’t really start Crowell against the Bengals next week and feel particularly good about it.

The opposite is true of Lamar Miller, who finally showed up and may hopefully being showing signs of life (that’s good). Miller went for 168 total yards and two touchdowns, rewarding the fantasy owners who have stuck with him (though many may not have had a choice). There is, unfortunately, some bad news. This performance was against the awful Indianapolis Colts defense, and the Houston Texans play the Denver Broncos and their much better defense next week (that’s bad).

With a report coming out that Eddie Lacy may miss Thursday night’s game between the Green Bay Packers and the Chicago Bears, the recently-acquired Knile Davis is about to be instantly thrown into the starting lineup. However, his value is likely limited. Even if Eddie Lacy doesn’t play, Davis is going to lose snaps to Randall Cobb and Ty Montgomery, as the Packers will likely rotate their wide receivers into the backfield like they have in the past. Davis will have some packages and designed plays on Thursday night, but he won’t be ready for a significant workload.

Jonathan Stewart returned to the starting lineup for the Carolina Panthers, and Cameron Artis-Payne and Fozzy Whittaker returned to irrelevance. Stewart looked like he was back to 100% on Sunday, rushing for 85 yards and two touchdowns. Whittaker rushed one time (and lost a yard) and caught one pass for four yards, while Artis-Payne was not even active. Even with the Panthers struggling, Stewart looks to once again be a reliable option IF he can stay healthy.

The Tevin Coleman – Devonta Freeman two-headed monster ran into a Seattle Seahawks defense that was ready for them on Sunday. If you owned one of these backs and were scared away by this matchup, hopefully, you were able to turn to someone like Terrance West, Spencer Ware, or Jay Ajayi. Coleman and Freeman go up against the Chargers next week, and they should have better luck.

If you picked up Justin Forsett and threw him right into your lineup, I am sorry that I was traveling for a wedding this weekend and was not able to stop you. Forsett rushed for five yards on five carries (see above: that’s bad). He played while the Lions were without both Theo Riddick and Dwayne Washington, but a handful of touches were all he was going to get on short notice. Think of Forsett when you are considering grabbing and starting Knile Davis this week. Don’t do it.