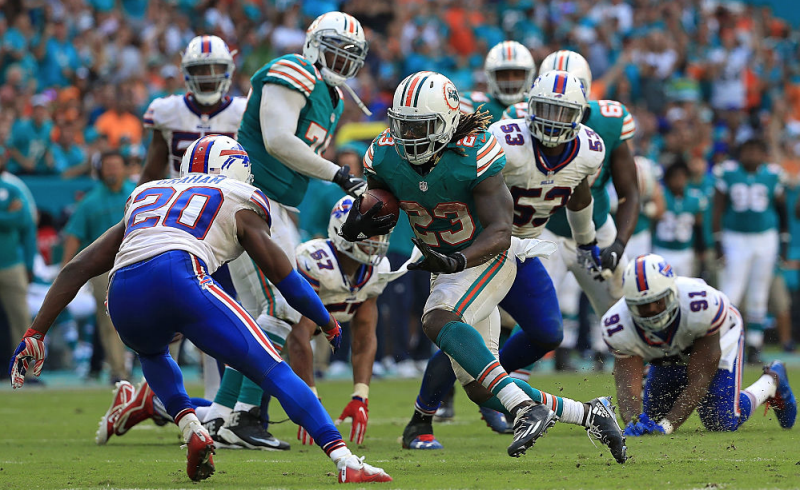 RIP, Arian Foster. We hardly knew ye. OK, Foster is not dead, but he has officially retired after Jay Ajayi dropped his second consecutive ridiculous performance. If we are to believe Foster, he retired because his ambition and his body are no longer on the same page (translation: he feels old, slow, and sore) and not because Ajayi started balling and taking all of his touches. But can we believe Foster? I don’t know. Probably. Maybe. Who cares? It doesn’t matter. He’s gone. Forget about him. Pop some champagne for Ajayi (and for yourself if you grabbed Ajayi and started him either of the last two weeks), pour a little out for Foster, and we’ll call it even.

Melvin Gordon went bananas, as well, scoring three touchdowns on Sunday. He is becoming such a great sell-high candidate that you almost want to hold onto him. He only rushed for 3.1 YPC on the day, but he still received 22 carries and added six catches for 53 years. Translation: Gordon is getting fed. With that meddling Danny Woodhead out of the picture, Gordon is getting a full workload and is delivering for fantasy owners. Personally, I would hang onto Gordon and ride the wave, but he is one of the most popular sells right now. If you do sell on Gordon, make sure you get something in the neighborhood of a WR1 in return.

Baltimore Ravens, why must you be so cruel? Terrance West and the other Ravens combined for just 19 total yards. Yes, you read that right. THEY. COMBINED. FOR. 19. BLEEPING. YARDS. After three solid weeks of production that had us all feeling safe (even heading into a matchup against the New York Jets), West delivered a dud. And by a dud, I mean eight rushes for 10 yards (a sparkling 1.3 YPC). If you want to look on the bright side, the other two running backs gained exactly zero yards on the ground on Sunday. West did leave the game with an ankle injury at one point, but he returned and looks to be fine going forward.

When word came out late last week that Jamaal Charles had some swelling in his knee, I hope you put him on your bench. If you didn’t, his one carry for zero yards probably didn’t do much for you. With Spencer Ware taking the starting running back job and, ahem, running with it, Chiefs head coach Andy Reid has said that he is content letting Charles gradually work his way back from knee surgery. With this latest setback and Ware’s success, though, who knows if Charles will ever again be a feature back in Kansas City.

We haven’t mentioned Frank Gore much in this space, but owners who drafted him late as a bench running back are getting a real treat. Granted, this treat is all vanilla, as he has only topped 100 yards once, but he has four touchdowns, is catching passes, and is consistently putting up 10-15 points every week. We will have to see if he can keep this production up for the rest of the year, but right now he is a solid flex or even a RB2 play.

An interesting player going forward is going to be Ty Montgomery of the Green Back Packers. Not only did he have 10 catches each of the last two weeks, but he just stumbled into being Green Bay’s starting running back this past week due to injuries to Eddie Lacy, James Starks, and youngster Don Jackson. ESPN and CBS have already given Montgomery RB eligibility, while Yahoo and NFL have yet to follow suit. I just checked one of my Yahoo leagues to confirm this, and Yahoo has this statement posted on our league page:

Update: At this time, Ty Montgomery will remain WR eligible only. If and when the Packers list him at RB, Yahoo will update his position.

So, at least for now, Yahoo is being no fun. Still, grab Montgomery if you can and if you are desperate at RB (like I am in half of my leagues). Another candidate here might just be James Starks. Once Starks is healthy, he is going to get some work out of that backfield, so he is an interesting stash candidate as we look ahead.

Matt Jones fumbled again for Washington, and Chris Thompson continues to capitalize on the touches he is given whenever Jones enters the doghouse. While Jay Gruden insists that Jones is still his starter, it is clear to everyone that Thompson is having more success right now. Just look at their numbers from Sunday: Jones: 10 rushes, 27 yards (2.7 YPC); Thompson: 12 rushes, 73 yards (6.1 YPC). Oh, and Thompson added seven catches. Thompson was already a flex option in PPR leagues, but he is fighting his way into RB2 territory. We just have to hope Gruden doesn’t keep forcing the ball to Jones.

Carlos Hyde missed Week 7, which we knew was going to happen by around Thursday of last week. Shaun Draughn and Mike Davis were the next two guys up for touches, which we also knew. And then DuJuan Harris happened. Harris received half of the running back touches on the day, with 13 of 26. Draughn rushed only one time for 16 yards (16 YPC for those of you keeping track at home), while Mike Davis rushed seven times for 21 yards (3 YPC), but they both did get into the end zone to somewhat ease the pain for fantasy owners. With the 49ers heading into a bye week, Hyde will likely be back. Hopefully, he stays back, and we never have to discuss those other three running backs this much again.