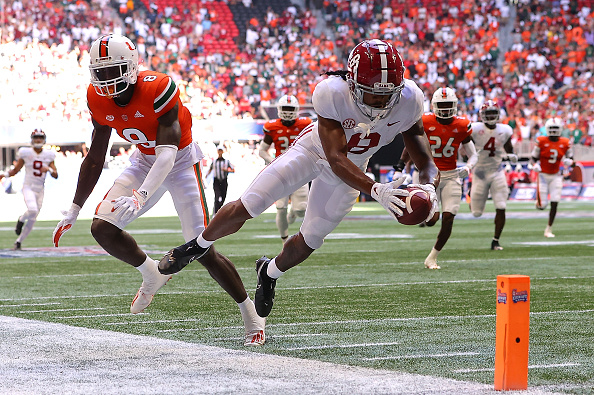 With the 59th overall pick of the 2022 draft, the BC Lions drafted Alabama receiver John Metchie III. Unfortunately for the Lions, Metchie was also selected by the Houston Texans with the 44th overall pick of the 2022 NFL Draft, their fourth selection of the year, so he’ll be staying stateside, being the highest-drafted offensive skill position player drafted thus far in the Nick Caserio era. Metchie is the eighth of nine Tide players drafted while Caserio was either the New England Patriots’ director of player personnel (2008-2020), or Texans general manager (2021-present); Caserio and the Texans drew from the same well with their very next pick (linebacker Christian Harris.)

Metchie had a quiet freshman season before bursting onto the scene as a sophomore, playing with 2021 first-round picks Mac Jones, DeVonta Smith, and Jaylen Waddle and finishing with an impressive line of 55-916-6 (16.7); he took over for Waddle when the future Dolphin injured his ankle five weeks into the season. Metchie wasn’t quite as dynamic this past year, but benefited from significantly increased volume, catching 96-1,142-8 (11.9) as a junior before tearing his ACL in the SEC Championship Game against Georgia. His junior season represented a significant leap forward in the overall consistency of Metchie’s output – whereas he had five games which would have netted at least 15 points in a standard PPR league as a sophomore, he reached that figure eight times as a junior, with big games against major conference opponents and some of his quieter games coming in blowouts against smaller programs.

Metchie probably came off the board a little bit earlier than most people were expecting. However, based purely on what he showed in college, his draft position looks more reasonable, in large part because, health aside, he is more of a known quality than some of his peers in this year’s draft class. In college, he showed the ability to line up both inside and outside (playing just under 400 snaps from the slot over the past two years combined), with the quickness and technicality to release at the line against press (particularly with his hop), the ability to change speeds, sell routes, and create separate down the field, and the capacity to create with the ball in his hands after the catch. Attention to detail as a route-runner allowed Metchie to win against man coverage in college, and his playmaking ability as a runner led Alabama to feed him the ball on a lot of underneath throws this past year, with a high rate of screens, shallow crosses, digs, and other plays of that nature. While Metchie did a lot of work on shorter throws last year, he looked like more of a deep threat as a sophomore and shows the ability to track the ball over his shoulder effectively and make adjustments as needed.

Despite having one of the most pro-ready games in the class, Metchie has a few limitations worth mentioning. Obviously, he’s on the smaller side at 5’11” and 189 lbs., but more concerning, his arms measured just slightly over 30.5” during the pre-draft process, which ranks in the 22nd percentile among receivers, so although he’s capable of snagging passes away from his frame, he’s hardly a massive target. Moreover, he has had some issues with drops, including last season, despite having average hand size (9.25 inches). Although he’s a strong route runner, he can be disrupted by physical cornerbacks or struggle to shield defenders from the ball when working over the middle. The competitiveness he shows after the catch also doesn’t always translate into his stalk blocking, so it would also be nice to see more consistent physicality in the run game, especially because the Texans have placed a priority on establishing the run after finishing last season averaging just 3.4 yards per carry and ranking dead last in total rushing yards.

Three wide receivers played over half of Houston’s snaps last season – lead target Brandin Cooks at just under 78%, followed by Chris Conley (58.4%) and Nico Collins (50.3%). All three will return in 2022; the structure of the two-year, $39.8 million contract Cooks signed in April, $36 million of which was guaranteed, suggests he’ll be in Houston for at least 2022 and 2023, while Nico Collins was a third-round selection last year and as such is under contract for another three years. However, Conley is 30 years old and only on a one-year contract, while Philip Dorsett also has just a year remaining on his deal. The presence of such veteran stopgaps may make it difficult for Metchie to rack up a ton of snaps as a rookie, but will also allow him to rehab his knee and learn from more experienced receivers before taking over one of the top three receiver spots on a more full-time basis in 2023. Last season, Houston’s fifth receiver in terms of snaps was Danny Amendola (17.9%), who managed to catch 24-248-3. Something in that range might be a reasonable, relatively conservative expectation for Metchie’s rookie year given the team’s current depth and his ongoing rehabilitation process. While Metchie has been doing individual work at Texans practices, the team is also committed to letting him take his recovery slowly.

The Texans are currently undergoing an offensive transition, having fired head coach David Culley, who has an offensive background, and offensive coordinator Tim Kelly, who had held that position since 2019. New coordinator Pep Hamilton spent last season as the team’s quarterbacks coach and passing game coordinator; he was likely selected to help Houston establish the running game, and to provide continuity for second-year quarterback Davis Mills. The Colts didn’t have a thousand-yard rusher during Hamilton’s tenure as coordinator from 2013-2015 (Frank Gore came closest in 2015), but emphasized running the ball from bigger formations, with guards pulling and tight ends coming across the formation and cracking backside pursuers. If the Texans, who also drafted guard Kenyon Green in the first round this year, can put together a more credible running game in 2022, that might create opportunities for play-action passes that create windows for Davis Mills over the middle of the field, with Metchie’s ability to create on over routes potentially fitting in well.

Speaking of the passing game, while Hamilton opened up the offense as Colts coordinator back in 2014, with Andrew Luck racking up a staggering 73 deep attempts, the offense was far more conservative in both 2013 and 2015. Mills rarely threw deep last year (6.8 yards per attempt, 4.1 air yards per attempt, 31 deep throws), and I’d expect the Texans to continue emphasizing shorter throws, keeping things manageable for their second-year signal-caller. Given the most likely dimensions of Houston’s passing attack in 2022, Metchie’s ability to create separation with his releases on shorter routes and his dynamism after the catch (6.7 average yards after catch per reception) likely appealed to the Texans, as it could create the potential to generate big gains on shorter throws that might add a measure of explosiveness to the offense without putting too much pressure on Mills to attack downfield. When healthy, look for Metchie to become a big part of Houston’s offense.