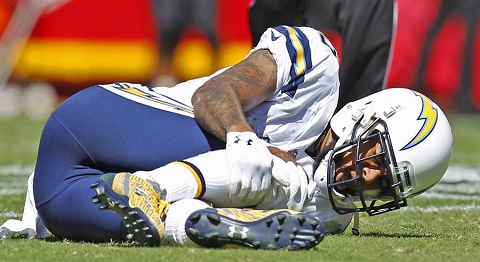 Well, on a day where Jim Nantz called a pregame 9/11 memorial a 9/11 celebration, there really isn’t anywhere to go other than down… Or maybe I’m just talking in the context of the Chargers. And yes, I think I’ve written this before, but as one of the few Chargers fans in the industry (there are dozes of us, dozens!), I actually try really hard not to wax poetic about this team, an anti-bias if you will. (Except for Philip Rivers, he’s a flower.) Though, it could also be because injuries and disappointment have been a yearly routine for the Chargers, so plugging in a fork is probably more preferable than writing about them. Regardless, I only try to focus on them when it is absolutely necessary, because, believe me, I’d rather not write about how they lost yesterday despite having a 24-point lead at the half, nor would I want to mention that the Chiefs had the biggest comeback in franchise history, especially since both of those things would probably put someone like myself on suicide watch… But I do probably need to discuss Keenan Allen‘s non-contact knee injury that occurred before the half, which required a cart and hospital visit. It has now been confirmed to be an ACL tear, and based on my extensive health knowledge and degree in orthopedics (haha, my mother wishes!), I can come to the determination that this is bad. Like, season-ending bad. Also, knees continue to be a weak point in human anatomy. Also possibly groins. And this will not only cause ripple effects in football, but fantasy football as well. I think it’s fair to assume that Allen will be out the rest of the year, and here’s who will be affected positively by it: Travis Benjamin, Tyrell Williams, and Dontrelle Inman. To a lesser extent? Antonio Gates and Danny Woodhead. Here’s who will be affected negatively by it: My liver.

I think the natural inclination to think this is great news for Travis Benjamin is the correct one, but we should temper it just a bit. The Chargers offense will spread out a little more now, even if Benjamin is your de facto number one receiver on the depth chart, Rivers will still come to rely on both Gates and Woodhead as his primary playmakers. True, this dynamic existed before, but it’s no secret that Rivers priorities were always Allen->Gates->Woodhead. Both Dontrelle Inman and Tyrell Williams are probably going to be above average options on the waiver wire if you want to make a move later this week for some depth, but I can’t really state with confidence that they are starters in 10-team and 12-team league formats… yet. If you have a gun to my head (jokes on you, I already have one pointed there), I’ve always had a soft spot for Inman, but Tyrell Williams looked fantastic on his two receptions (for 71 yards) and was targeted five times yesterday, best on the team if you weren’t named Benjamin, Woodhead, or Allen. If you were an Allen owner and are desperate, I’d go ahead and grab Williams… and then freebase something. Anything.

Ameer Abdullah (12 CAR, 63 YDS, 5.3 AVG and 5 REC, 57 YDS, 11.4 AVG, 1 TD) and Theo Riddick (7 CAR, 45 YDS, 6.4 AVG, 1 TD and 5 REC, 63 YDS, 12.6 AVG, 1 TD). Wow, after watching the Bears yesterday, I almost didn’t recognize what a running game was until this game came along. In most leagues, both these backs are ownable, and while it was questionable for Riddick to be owned in 10-team leagues, he could be a highly-sought waiver add this week. I’ve always liked him, especially in PPR formats, and once described him as a poor man’s Reggie Bush. Pretty sure he’s a rich man’s Reggie Bush now… or is Reggie Bush a poor man’s Riddick?

Keenan Allen – 6 REC, 63 YDS, 10.5 AVG. As mentioned above, the latest reporting has stated: “The Chargers believe Allen suffered a torn anterior cruciate ligament at Arrowhead Stadium, a source said Sunday. While expected to miss the remainder of the 2016 season, he is scheduled for an MRI on Monday back in San Diego to gain further clarity on the full extent of damage to his right knee.” No, I don’t want to start main-lining booze right now. Why do you ask?

Gary Barnidge – 0 REC, 3 TGTS. This may be the Brownsiest Brown to ever Brown.

Dez Bryant – 1 REC, 8 YDS. I miss Calvin Johnson, and Dez Bryant is not making up for his absence.

Brandin Cooks – 6 REC, 143 YDS, 23.8 AVG, 2 TD. THIS GUY BRANDIN COOKS, I CALL HIM EMERIL LAGASSE BECAUSE HE’S SERVING UP QUALITY CAJUN TOUCHDOWNS. Get it? Because Emeril is from New Orleans… okay look, it’s my first Grudenism of the year, and I’m just warming up for tonight. So everyone calm down. CALM DOWN.

Larry Donnell – 1 REC, 15 YDS, 1 TD. You know your team is effed if Donnell is catching touchdowns against you. The guy can’t catch a goose feather pillow…

Jimmy Garoppolo – 24/33, 264 YDS, 8.0 AVG, 1 TD, 106.1 RTG and 4 CAR, 12 YDS. More like Gimmy Jaroppalo, amirite folks? Pretty stellar game for him (God, I don’t want to live in a world where Josh McDaniels merits praise), but things were obviously clicking for that depleted offense, and for driving through Arizona that quickly in the first quarter (8 Plays, 74 Yards, 4:13), you’d have to think Sheriff Joe Arpaio asked to see Garoppolo’s papers.

A.J. Green – 12 REC, 180 YDS, 15.0, 1 TD. It was a matchup between whether the Bengals would realize it was the regular season or if the Jets would realize that they were the Jets. I think you know which one happened. And I have to add, Revis Isle seems much more consumer-friendly than I remember.

Melvin Gordon – 14 CAR, 57 YDS, 4.1 AVG, 2 TD. – Ayyyye, Gordon ran like he actually cares about having a good career. And his first career touchdowns were yesterday? Is that right? Jesus, this is his second year…

Jermaine Gresham – 4 REC, 41 YDS, 10.3 AVG. Gresham staying Jermaine to that game. That’s actually all I have for him. Call me, ladies.

Robert Griffin III – 12/26, 190 YDS, 7.3 AVG, 1 INT, 55.0 RTG and 5 CAR, 37 YDS. Suffered a left shoulder sprain, and was pretty much violently abused the entire game. At this point, he should just retire before the Browns’ offensive line does it for him. Then again, there are some that consider going to Cleveland is basically retirement anyways, so…

Rashad Jennings – 18 CAR, 75 YDS, 4.2 AVG and 1 REC, 3 YDS. Little known fact: If the Giants don’t run up the middle on first down, the Earth will spin off its axis. It almost makes you wonder if Norv Turner is moonlighting with the Giants.

Jordan Matthews – 7 REC, 114 YDS, 16.3 AVG, 1 TD. I can’t tell you how crucial it is that Matthews does not enter into midseason form. I’d actually like him to do good things like this throughout the year…

Brock Osweiler – 22/35, 231 YDS, 6.6 AVG, 2 TD, 1 INT, 89.1 RTG and 4 CAR, 16 YDS. The Bears defense managed to grab an interception, which I’m pretty sure hasn’t happened in the past decade, but I’d classify them as: Still Bad. So we should probably wait before making any judgements on Brock Lobster (yes, we should probably start hashtagging that). Also, did you know Osweiler used to play basketball? DRINK.

Kenny Stills – 1 REC, 16 YDS. I’m not sure how to react to that. Bobby McCain does though.

Steve Smith Sr. – 5 REC, 19 YDS, 3.8 AVG. Steve Smith reminds me of one of those women you have to hold back when they’re angry because if you don’t, they’ll attack someone with their shoe. I don’t know, maybe you just had to be there.

Russell Wilson – 27/43, 258 YDS, 6.0 AVG, 1 TD, 1 INT, 77.5 RTG and 4 CAR, 16 YDS. Time for some of that miracle bubble water, right? Wilson did get his ankle stepped on in the third quarter after getting sacked by Ndamukong Suh, so that might have played a part in some of his struggles. A precautionary x-ray was taken but don’t worry everyone, I’m sure God is just testing Russell. After the game, Wilson said: “It feels a little sore. I’ll be alright — just a little ice, a little prayer, a lot of treatment.” This guy…

I don’t know why maaaan. I sorta had to I think.

Can you believe that if the playoffs started right now, the Texans, Lions, Buccaneers, and Giants would be postseason teams? The more you know. (Maybe less in this case.)