Monrovia is the capital city of the African country Liberia. Today, it is home to just over 1 million citizens, making it the country’s most populous city. Liberia’s capital is rich with a compelling history. It was built by emancipated American slaves in the early 1800s and took its name from former United States President James Monroe. Monroe was a staunch supporter of sending freed slaves to Africa to live better lives than could be had in the Americas at that time.

This capital city is the birthplace of Nobel Peace Prize winner Ellen Johnson Sirleaf. Sirleaf was the first woman elected in Africa as President of their country. She was given her award for being a leading advocate on women’s rights and safety. I could write thousands of words on Monrovia or Sirleaf and their place in history (another day). Today, I will be telling you all about the second most famous Monrovian, Washington “Awaiting a Name’s” sophomore wide receiver, Kelvin Harmon.

Kelvin Harmon was born in Monrovia, moving to the United States at four years old. He has the prototypical build of an NFL wideout, standing 6’2″ and weighing 215 pounds. Harmon committed to the University of South Carolina initially, but eventually ended up just north of there at North Carolina State. In his sophomore and junior years, he went ballistic, notching 150 receptions, 2203 yards, and 11 touchdowns. All of that came in 25 games.

His draft stock was incredibly high heading into the combine, drawing comparisons from NFL insiders to Kenny Golladay, but his combine numbers smothered the hype. Kelvin ran an uninspiring 4.60 second, 40-yard dash, and concerns arose about his ability to separate at the next level with average speed. Kelvin Harmon fell from an early-round lock to Washington’s 6th round value.

That sixth-rounder has been the talk of the Razzball SFBX chat all week. You will likely find him on all of our rosters. He’s also been written about by Dr. Blair, in his Late Round WR Targets, and Rudy Gamble has Harmon knocking on the door of a Top 60 wide receiver in his 2020 Projections.

Why were we talking about a wide receiver who had 30 catches for 365 yards in 2019? Kelvin Harmon is not a fantasy target outside of the last rounds in your draft in 2020, but he is a great dart to throw. Washington doesn’t have a distinct receiving tree behind Terry McLaurin, and last season they gave Harmon a lot of run with the first team down the stretch. It’s rare at the end of drafts to find players with 90% snap shares.

Here is a chart of Kelvin Harmon’s snap percentage each game in 2019: 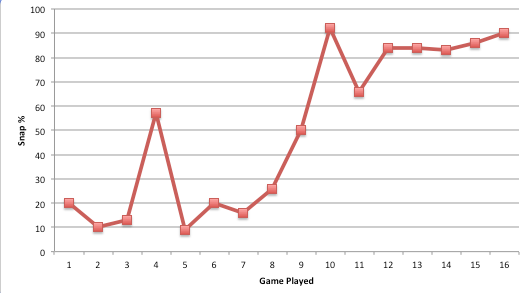 Are there any statistics to back up the idea that Kelvin Harmon will be Dwayne Haskins’ WR2? It took some digging, but I did find one. Player Profiler ranked Harmon NUMBER 1 IN THE NFL last season in catchable target rate, with 90.9% of his 40 targets being deemed catchable. All of those perfect throws could mean that he and Haskins have a good connection or that Washington found routes the two worked nicely together and stuck with them. Either way, there was something there worth taking a chance on.

Harmon doesn’t even have an ADP right now, but perhaps he will once SFBX drafts conclude. So if you are staring down the Larry Fitzgerald, Robby Anderson, and Tyrell Williams’ of the world in your last round, instead, take a shot on Monrovia’s main man.  Then you can sit back, enjoy some Torborgee (a spicy Liberian stew) and watch Kelvin Harmon blossom into a draft-day steal.