Thursday’s thrilling Broncos/Jets matchup was overshadowed by the unfortunate COVID developments in Tennessee which have resulted in the postponement of Sunday’s Titans’ game against the Steelers. This Titans fiasco got me thinking about a picture I snapped during the NFL Draft back in April: 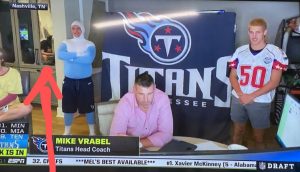 Take your time, there’s a lot to digest in this shot. Someone in this picture has to be responsible for the viral outbreak in Tennessee this week, right? Vrabel’s spandex-hooded son and Joe-Dirt-mullet son are solid candidates, just look at those two goons. And Vrabel himself can’t be counted out either based on the offspring he produced. But the odds on favorite has to be the dude on the crapper in the back left corner—that guy’s up to no good. Where is he pooping? Is that even a toilet? Alas, one player who didn’t take a dump during Thursday night’s game was Melvin Gordon who handled 23 carries for 107 yards, 2 catches for 11 yards and his 3rd and 4th touchdowns. Pigskinonator was all over this one, ranking Gordon as it’s #9 RB this week. Now might be a decent time to sell Gordon since Phillip Lindsay (toe) may be ready to swoop in and steal half the carries in week 5. Don’t forget, we have a free trade analyzer to help you brainstorm deals and dominate your league. Anyway, here’s what else I saw yesterday for fantasy football:

Sam Darnold – 23/42 for 230 yards, 6 carries for 84 yards and a rushing touchdown. Not bad for a guy with a broken collar bone! If you didn’t watch the game, Troy Aikman very confidently proclaimed that Darnold must have broken his collar bone when he left early in the first half after a sack. The Jets QB would return on the very next drive. Listening to Buck and Aikman is worse than listening to my senile grandfather’s views on social injustice.

Jamison Crowder – 7 catches for 104 yards. Jamison is the one player on the Jets who won’t drive you to drink whiskey.

Frank Gore – 13 carries for 30 yards, 1 catch for 6 yards. 2.3 yards per carry is about what we’ve come to expect from the Jets offense at this point. On the plus side, Le’Veon Bell (hamstring) is eligible to return in week 5 so make sure he wasn’t dropped if you’re in a shallow league. If Adam Gase gets canned, as expected, then there still might be hope for a little fantasy value out of this Jets offense.

Chris Herndon – 1 catch for 11 yards. Now has 5 catches for 35 yards over the last three weeks which is sadder than my Saturday night plans.

Jeff Smith – 7 catches for 81 yards. I know, he sounds like a made up player. Smith saw a surprising 9 targets as Darnold’s flavor of the week with Braxton Berrios (0 catches on 3 targets) disappearing into the sketchy Metlife Stadium turf.

Brett Rypien – 19/31 for 242 yards, 2 touchdowns and 3 interceptions. Aikman rambled for a good ten minutes about handling wet balls. Apparently Rypien isn’t great with wet balls. Footballs I mean. He threw two interceptions in the 4th quarter including a pick six. But Rypien looked decent outside of the (horrible) interceptions, expect him to get another chance next week.

Jerry Jeudy – 2 catches for 61 yards and his 1st career touchdown. The jury is in, Judge Jeudy is guilty of being fun to watch. The rookie’s a solid WR3 with WR2 upside rest of season.

Tim Patrick – 6 catches for 113 yards and his 2nd touchdown. When Courtland Sutton (ACL) went down for the year there was buzz around rookie speedster  K.J. Hamler (no targets, left early with a hamstring injury) but Patrick has quickly establish himself as #2 on a Broncos team which should be playing from behind often this season. Make sure he’s owned in deeper leagues, he might end up being a surprise WR3.

Noah Fant – 5 catches for 35 yards before being carted off with a knee injury. Not Fant-astic. If the young tight end misses time, one of Nick Vannett (1 catch for 7 yards) or Jake Butt (0 catches on 1 target) will be next in line if that kind of thing excites you. I really hope that doesn’t excite you.