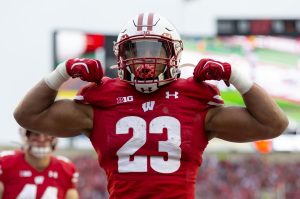 Welcome to my first attempt at formal rookie rankings for the world to see! I have used a mix of metrics that seem to matter based on my research, mock draft projections and a sprinkling of film analysis (done by people better at it than me) to arrive at this list.

I explain why I chose the stats I did in the linked article above. While career yards and dominator rating are solidified, we don’t have verified numbers on some metrics.  To rank these RBs pre-combine I had to make some assumptions on the 2 values below.

This is a metric that takes into account height, weight and forty time into a single number that can be compared across players. I landed on 92.6 as a cutoff but think of that as a general threshold. I don’t think 92.5 dooms a player who looks good elsewhere.

While official measurements will be taken at the combine I calculated whether I think each player will make that 92.6 cutoff based on listed ht/wt and a forty time of 4.59. The letter “P” means that player will probably hit the threshold and “M” stands for maybe. Since it is a subjective estimation at this point, I have put an asterisk by that metric.

It is no surprise that NFL draft capital means a lot for future fantasy production. I have read many mock drafts from around the internet including the great work put out by The Draft Network, Razzball’s own Reid Kashmanian, and others.

Like projecting the HaSS, this is also an opinion at this time, marked by an asterisk. However, I tried to take into account the likelihood these players hit certain draft capital marks, and bake that into the overall rank.

Finally, while I am not a “film guy” I do value what tape analysis brings to the table. There is a lot of quality information from film watchers on Twitter (like fellow Razzballer BDon) and I make notes when they get really excited about a player. There are certain things that pique my interest for RBs such as confirmed long speed, “finishing” runs/falling forward and pass catching.

I also can’t deny that this exercise is a blend of art and science, so for tiebreakers there is an element of personal preference or subjective reasoning. I hope you enjoy and can’t wait for the heat that follows!

A Personal Note on the Combine

While forty time plays into the HaSS, which I identified as a worthwhile filter, most combine results matter only because of the effect on how teams rank players, which impacts projected draft slot. Perceived changes in draft capital will be the main reason combine results change my rankings. For example: I won’t think of Clyde Edwards-Helaire differently if he runs a 4.33. But that result could send shockwaves through the NFL and all of a sudden we’re hearing he’s a 2nd round lock. That matters more than the forty time itself, and could impact the post-combine ranking.

I am not sure what else one could possibly want from a prospect. Immediate and elite production sustained over 3 years, early entry, and no notable injuries. He caught enough passes (23 in his final season) to ensure he’s not a zero in that department. The tape even shows legit breakaway ability, even though that’s more of a cherry on top than a critical asset to me. He won’t go later than the second round in the NFL draft. Every box is double checked with Taylor. If he’s not your RB1, you’re overthinking this thing.

This is where some eyebrows will likely get raised, as Dobbins is probably RB3 or below for most people. Once I stepped back and looked at the numbers it made no sense for him to be anything but RB2. Like JT, he broke out as a freshman and never looked back. Dobbins checks every meaningful box to me as long as he’s a day 2 selection or better which seems very likely. I wouldn’t even be shocked if he winds up the best of this class.

Bring on the haters! I made the decision to drop Swift to RB3, but his secure 1st/2nd round NFL draft projection keeps him in my top tier for fantasy. He really doesn’t meet some thresholds that matter to me but a-la Miles Sanders before him, Swift shows pass game chops and impressive ability on film. I believe he will get the draft capital to make him a safe pick for fantasy prospects. If he really bombs the combine (like a forty >4.6) and we hear whispers of draft stock falling, I could see him dropping a tier.

Tier 2 – Exciting but I Have Questions

Like Swift he doesn’t hit the mark for career production but unlike Swift he did absolutely dominate his backfield. Much has been made of his horrific OL at FSU contributing to an ugly yards per touch for Akers, but I’m open to letting that slide. He’s a receiving threat and an exciting prospect to watch, however a less predictable draft position drops him a tier for now.

Moss will probably be a polarizing prospect throughout the process. I like his overall profile as an early producer who maintained backfield equity throughout his career. He was also more involved in the passing game than you probably think. The word is he doesn’t pop with burst on film but his career yards per touch is on par with any NFL prospect at 6.1. Since I’m not that familiar with his tape, Moss’ athleticism remains a question. If he can’t get a forty time to meet the HaSS threshold or just otherwise tests slow, I think he’d be knocked out of a 3rd round selection and this ranking will suffer.

My biggest issue with CEH is the fact he got about half the carries of “Nick Brossette” in 2018. As sophomores, the other players ranked this high were leading their backfields. So in 2019 did he evolve into a stud or ride the coattails of a historically good offense? A one year wonder is tough to project into a multi-year NFL producer. It seems like he’s a good bet to be drafted on day 2, so that helps. He’s one of the best receiving backs in the class, which also helps. He may measure sub-5’8″ so his forty will need to be pretty fast to meet the HaSS threshold, but his recruiting profile does note a 4.47. I think there’s risk here of a frustrating Duke Johnson career arc. Or maybe the modern NFL is ready to turn this profile into a fantasy stud.

The big bruiser from Boston is the closest thing you’ll see to Derrick Henry in this class. He will probably meet all criteria I’m looking for except draft capital, which is important. If featured in the right offense he could be startable for fantasy, but the fit is going to have to be perfect. It’s unlikely I wind up taking him in any of my rookie drafts but there is some potential here.

Despite having the most fun name to say, as a 5th year senior Vaughn will not excite many in the dynasty community. He does meet the career total yards threshold but he barely eclipsed the mark and needed 4 full years to do so. The positives are that he was productive in the SEC, he caught a good amount of passes and absolutely dominated the Vanderbilt backfield. The fact he’ll probably be a day 3 selection tempers overall expectations but the profile is interesting and he’s probably going to be worth a later rookie pick.

Tier 5 – End of the Roster Darts

Frankly, I’m just as surprised as you to see Kelley leading the last tier. His story is an interesting one as he is a 5th year senior who transferred from up FCS to FBS but just turned 22 years old in November. Starting his career at UC Davis, he was efficient but didn’t see much playing time while battling injuries then burned a redshirt after transferring to UCLA as a walk on. From that point on he was a workhorse for the Bruins logging the 10th most rushing yards in a season in 2018 and following with a solid 2019. I am not expecting much from this tier but most of these players seem to have a low ceiling while Kelley feels like a darkhorse to be a pre-draft riser if he impresses at the combine.

Benjamin’s sub-200 pound weigh in at the Senior Bowl threw cold water on his future prospects but his college production can’t be ignored. He was an absolute beast for the Sun Devils for 2 years, producing on the ground and through the air. One of the better pass-catchers in the class, he could be useful in PPR formats eventually if he lands in the right spot.

Evans is a very productive back from a weak FBS conference who will have a lot to prove at the combine to show he belongs athletically with this class. While his final 2 years were impressive at Appalachian State, they weren’t overwhelmingly gaudy in my mind to ease concerns for the lack of competition.

As a Gator grad, I am very familiar with what Perine did at the University of Florida. He definitely put plays on film that are impressive, showing vision, balance and even occasionally making long house calls. He was a true asset in the passing game as well, catching 40 balls his senior year. The glaring issue is that he never got close to commanding the Gator backfield, constantly sharing time with players who probably are not NFL caliber. I could see him being useful if he finds himself the lead back for a few games in the NFL due to injuries. Maybe he’s best left on the DFS speed dial.

The comp just writes itself as Gibson is this year’s Tony Pollard, following in the former Tiger’s footsteps. Both players were RB/WR hybrids for Memphis and seem like they could be interesting in today’s NFL. For all Pollard’s hype, once Zeke was signed he fell back to a role player for the Cowboys. Gibson seems destined for a similar fate: an athletic marvel who will light up the combine but enter the NFL as a raw athlete with no true position. A fun stash to see if a team can get creative, but I am not counting on much in year one.

After redshirting initially, he burst onto the scene in 2018 with over 1000 rushing yards in only 131 carries. He took the torch from injured Ty Johnson and averaged a whopping 7.9 yards per carry. The follow up campaign in 2019 saw a major regression in production although he still found the endzone 9 times. He’s intriguing as a smaller, dynamic back who may spark an offense. Unfortunately, the profile is a longshot for consistent NFL success.

The combine will show us if Warren can meet some minimal athletic benchmarks. He was a reliable workhorse for Cincinnati, logging 551 touches and 37 touchdowns over the last 2 seasons. Warren’s efficiency leaves a lot to be desired and at this point looks like a compiler more than a dynamic back.