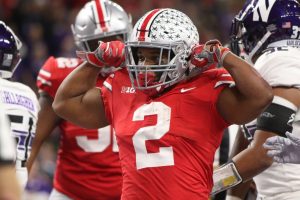 A few weeks ago, I sat down with the great Peter Howard’s (@pahowdy) college market share database and created a set of filters for college production that had a better hit rate than selecting just 1st round NFL WRs. This time I intend to do the same but with running backs. I have seen a lot of chatter on the Twitter site about characteristics shared by fantasy RB1s. For instance I saw that most of them run under a 4.6 forty. However, looking at just the successful players doesn’t make that a helpful nugget. You see, if ALL NFL RBs mostly run under a 4.6, then the fact that the best ones do still doesn’t help us when selecting from a giant pool of players.

I am interested in stats that are drastically different for the successful RBs compared to the misses. To find which stats set the RB1s apart I once again used Peter Howard’s data set but only looked at RBs drafted in 2012 and later. Then I separated out RBs who had at least 1 top 12 PPR finish (from now on referred to as “hits”) from the rest who never saw a RB1 season (misses). The hit rate for a random selection of any RB in the pool was 19% (29/152). Keep this in mind as we compare hit rates.

Before we get into the stats that seemed to matter, let’s take a look at some data points that did not help to separate RB1s from the rest:

Essentially, every metric that can be measured at the combine was virtually the same for the hits and misses. Even the granddaddy of all metrics, the “forty yard dash” means virtually nothing when it comes to separating the wheat from the chaff at RB. I was surprised to see that BMI and receptions per game was about the same for both groups. Breakout age is probably a “rule out” more than a “rule in” metric. In other words, if a back didn’t break out by 20 go ahead and write him off. But it doesn’t ensure success if they did breakout at 20.

There were a select few metrics in which the hits looked very different from the misses:

These are mostly volume based production numbers rather than athletic measurables. It appears that being a workhorse in college portends success in the NFL. I think we can put to rest the whole “is it better to save touches for the NFL?” discussion. Unless things drastically change, “wear on the tires” appears to be a good thing when it comes to RBs. Or at least it’s not a bad thing.

So how can this information be weaponized for your dynasty rookie drafts? Similar to what I did with WRs, I was able to use these stats and effectively create a “filter” that finds hits at a better rate than the gold standard of simply chasing 1st round picks.

It makes sense that draft capital is one of the best indicators for NFL success, especially at RB where if nothing else it buys you touches (except Rashaad Penny). Touches are king, so it’s no surprise that 67% (8/12) of 1st round RBs since 2012 have had at least 1 top 12 fantasy season. Second round picks had a hit rate of 42% (8/19), but third round picks were actually worse than a random selection from the entire pool at 18% (4/22). Finally, only 9% of RBs selected 4th round or later ever had a RB1 finish. From my analysis, no single metric could come close to the hit rate of a 1st or 2nd round pick.

The best hit rate for any other single stat was career yards >3800, which had a hit rate of 32% (19/60). This was somewhat disappointing, since it’s pretty boring to just use draft capital as your guide. That seems to take much of the excitement out of this whole endeavor. Conceding that was important, I then isolated top 3 round picks and then filtered for some additional metrics to see if something could be more predictive than 1st round draft capital alone.

As you can see, it is difficult to improve on the hit rate a 1st round pick can offer. However, I was able to increase the pool of eligible players with 2 sets of criteria while maintaining a similar hit rate. Finally by creating a “super filter”, I was able to reach an 80% hit rate. Of course, only 10 players even meet that criteria since 2012 so they don’t grow on trees.

Implications for the 2020 class

One player that takes a hit in light of this data is D’Andre Swift. Despite having delightful film and good production, he does not meet the 3800 career yards threshold. Like Jerry Jeudy, the Swift stans will argue that the Georgia position room was loaded with elite talent. While that was true in Swift’s freshman year, his main competition in 2018 and 2019 was UDFA Elijah Holyfield and probable UDFA Brian Herrien. I think Swift is good, but that’s concerning.

The other two 2020 studs Taylor and Dobbins clear 3800 yards and 50% DR easily. Other interesting names over 3800 career yards and >50% DR are Zack Moss (well, he’s at 49% DR), AJ Dillon and Ke’Shawn Vaughn. Keep in mind Vaughn’s stats are skewed since he is a rare 5th year senior. We do not have official HaSSes for these players until the combine but plugging in some assumptions, if they are under 4.6 each of these players will easily have an HaSS >92.6.

Then we are back around to our old friend, draft capital.