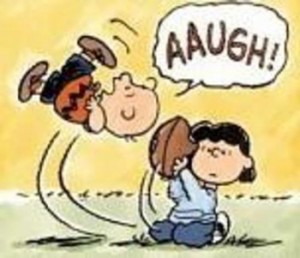 It’s that time of year. A time when everyone is looking at their fantasy baseball team in disgust while they turn to fantasy football drafts for hope and a reason to live again.  It’s a bittersweet season where we look upon our Sundays with a sense of joy and wonder in our eyes.  It’s also a time for us to not be on guard for what we should be fearful of.  While I’m not trying to bring you down, I do want to remind you of last year when you said ‘Man, I have an awesome team.  Check it out, I have Michael Vick, Kenny Britt, and Mark Ingram.  They should just give me that trophy now!’  Well, Ozymandius, I’d really hate to see you repeat the same mistake and so would the people over at the Fantasy Pros who are providing everyone who’s smart enough to take full control of their draft by using their CheatSheetWizard.  So without further ado and for your reading and draft prep pleasure, we’d like to take a look at some players that are gonna have you lying flat on your back by the end of the season if you draft them.  Since we’re doing our Razzball Commenter Leagues via yahoo – and we’re still doing it so come on over and create a league or join one – we’ll be using yahoo rankings for review.  Whether it’s draft day cost, injury history or just a career full of hope that has only lead to nope, let’s take a look at Razzball and Fantasy Pros 2012 All-Lucy Van Pelt team.

QB: Peyton Manning – I want to be wrong.  Trust me, when I think back to the Peyton Manning glory days I get just as nostalgic as you do.  But pull off your rose-tinted glasses that can only see 2010 or prior and think about what he did in 2011: Nada, zilch, bupkis.  That’s just a few more ways Seinfeld can describe his shows about nothing.  When you consider his current draft price of 55 in yahoo leagues ahead of guys like Tony Romo (56) and Matt Ryan (76), you’re taking on more risk than you need to with a 36 year old quarterback at a talent rich position.

WR1: Roddy White – It’s all about draft day price with this one.  I still think Roddy is going to have a great 2012 season, but are we really going to draft him ahead of guys like Greg Jennings and with the 19th pick to boot?  And what exactly does ‘to boot’ mean anyway?  But I digress, I love Roddy just not that much in 2012 as the team announced a reduced workload for him and he’ll be competing with Julio Jones for looks and targets.  This ranking has ‘AUUGH!’ written all over it.

WR2: Andre Johnson – Look, I get it, the dude is a beast when he’s healthy.  Andre is competing with Calvin Johnson and Larry Fitzgerald for wide receiver supremacy if he plays a full 16 game season.  As nice as it would be to experience that, he’s only done it 5 out of the 9 seasons he’s played with the last time it happened being 2009.  That’s 4 different times Lucy has pulled the ball out from underneath you and twice in a row.  Are you gonna let it happen again with the 25th pick?

WR3: Sidney Rice – I hate to pick on Sidney but it’s time to face facts: wide receivers without functional arms don’t do much receiving.  I say this because Rice had not one but two surgeries on his shoulders over the off-season.  The kicker to this bit of info which is weird because we’re talking about arms and arms don’t kick?  It wasn’t just to one arm, it was on both.  As much as I’d like to believe they can rebuild him because they have the technology, I could just as easily take Pierre Garcon with the 86th pick instead.  We have the technology too, you know.  It’s called the internet.  Let’s all do a little research before spending our 83rd pick on a receiver.

RB1: Chris Johnson – We went over CJ2K in a Fantasy Flatliners post yesterday by Andrew.  Even if I disagreed with him, I’m here to show some solidarity.  We are family, get up everybody and sing.  Overall, he’s being ranked as the 8th pick off the board in yahoo leagues.  Yes, I have him 12th in my 2012 fantasy football rankings but had this to say about him: ‘What I see is two straight years of decline after nearly 400 touches in 2009 and though a rebound off of 2011 is almost a given, I don’t think it goes all that high.’  See, that’s me being pessimistic despite the ranking.  It also just seems downright hypocritical.  Sorry about that, it is written into my fantasy expert analyst contract to contradict myself as much as possible over the course of the season to create conflict.  You know, like reality television.  See, I’m just getting started earlier than most.

RB2: Michael Turner – Alright, let me get this straight.  Over the last six games of 2011, this guy only gave us one game with over 3.6 yards per carry and it was the 17th game of the season.  Then in early May, Atlanta stated they would be reducing Turner’s workload for the 2012 season.  And yet, yahoo is putting him as #37th off the board, ahead of running backs such as Steven Jackson and Darren Sproles?  The days of 300 touches are over here, we need to be reasonable when looking at Turner’s role and production for 2012.

TE: Antonio Gates – You tell me the last time you heard ‘Antonio Gates’ and ‘100% healthy’ in the same sentence and I’ll put money on it that it’s from Ron Burgundy; he’ll read anything you put on that prompter.  Like many football players, Gates has dealt with nicks and dings from time to time throughout his career but his most recent two seasons have seen him only play 23 of a possible 32 games due to nagging foot issues.  When you factor in his age of 32, you have to question his current rank of 45 in yahoo leagues as the 3rd best option at TE especially with players such as Aaron Hernandez and Vernon Davis going below him in the draft.  With a position as deep as Tight End, spending that early of a pick on it could prove costly for an oft-injured star.

Flex: BenJarvus Green-Ellis – I think people are looking at the 24 touchdowns since 2010 a little too hard here.  The Law Firm doesn’t catch passes, has landed in a time share with Bernard Scott on a team that totaled 10 rushing TDs in 2011 and he’s being ranked ahead of a guy like Peyton Hillis.  Don’t get me wrong, I like acronyms as much as anyone but I’m not taking BJGE with the 66th pick.