Below is an exclusive profile of our Week 3 Razzbowl leader, Joey Wright, who has worn many hats outside of the awkward wool sombrero we make the Razzbowl leaders wear. Joey has been a therapist for goldfish, a ferret groomer, and he holds the movie Frozen 2 in high regard. As we got to know each other on Twitter, I conducted this completely accurate and real interview with him wherein he revealed some of his deepest fantasies…FANTASY FOOTBALL! Come on!

J.W.: Why didn’t you wash it? It smells like Long John Silver’s in here.

EWB: I hear you like movies, J.W. Can you tell us about some of your favorites?

J.W.: I’d have to start with the critical 1972 nature horror film, Frogs, which really depicts the plight of humans against a vengeful Mother Earth. After that, My Dinner with Andre is a close second.

EWB: Great! Have you checked in on Donkey Teeth’s Youtube videos? He’s getting to be quite the director himself.

J.W.: Yeah, I’d say he’s on par with Uwe Boll. I hear D.T. is willing to do competitive yoga with people who disagree with his fantasy takes.

EWB: Yeah, he absolutely downward dogged me when I told mentioned Kerryon Johnson was in trouble in Detroit. He did, however, provide me a mantra to ease the pain of my awful Razzbowl team.

EWB: “Don’t draft Fournette.” That was it. Pretty simple.

As mentioned, Joey Wright was super-excited to take over the #1 spot in the main event Razzbowl this week, and he did so in a commanding fashion. Joey leads the rest of the competition by 20 points, which is pretty good at this juncture. 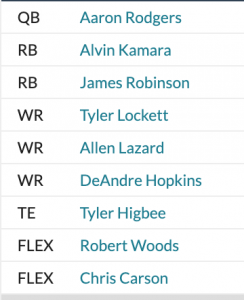 Joey benefitted from a huge game by A-Rog and Lazard, showing the power of a good, low-key pairing. Whether that pair continues to produce results will be seen on the rest of the season, but with Marvin Jones as Joey’s last big-name receiver, he’ll rely on big games in the NFC North to remain a leader in the competition. Oddly, Joey has 4 quarterbacks rostered, including the Tyrod/Justin Herbert combo. If you read my Top 30 Quarterbacks update this week, you would see that Tyrod is way off the chart and Herbert is in the top 20. Joey’s got room to improve, and he’s looking to protect his top spot against some fierce competition. Most notably, Joey had a tough drafting room: his league featured Pat Fitzmaurice, the second-highest scorer in the 2019 Razzbowl, perennial fantasy super-star Jeff Erickson, Hasan Rahim of Rotoviz, and Andrew Cooper of Fantasy Alarm. Everybody should give Joey a big pat on the back for his success against such stellar competition.

In second place, Razzball’s own Roto-Wan has been riding the Russell Wilson / Tyler Lockett pair to great success. Like Joey Wright, he picked up James Robinson, who has been stellar in best ball leagues so far.

Harkening back to my Razzbowl Guidebook and my discussion of Robust RB drafting strategy, the top 5 teams in the Razzbowl are Robust RB draft strategies. Again, we’re early in the competition, but almost all of the top finishers in the 2019 Razzbowl and the NFFC Cutline competitions were constructed in a Robust RB fashion. The Robust RB seems to be leading the way in the 2020 competition as well.

With 239.65 points and the 9th spot overall, Josh Kroll scored the most points in Week 3 behind huge games from Patrick Mahomes and Alvin Kamara. Kroll’s team, which is built somewhat like a modified 0RB, featured Joshua Kelley as the second RB, but he’s waiting for James White to come back to the field and emerge as Cam Newton’s favorite short yardage target. Kroll is still rostering Courtland Sutton, so he’s ready for a hard FAAB-ing.

Players FAAB’d quietly in Week 3, with Jeff Wilson leading all FAAB acquisitions by a wide margin. Two more running backs rounded out the top FAAB finds — Brian Hill of the Falcons and Rex Burkhead of the Patriots — and all of these players will look to recreate their Week 3 success with their new managers. Razzball reader Jolt in Flow managed to snag Justin Jefferson in a Razzbowl qualifier league for $6, and that hopefully Jefferson can re-create his Week 3 breakout performance of 175 yards and a TD. The week’s most perplexing FAAB acquisition was a $2 bid from Janiga in the main event on Mitch Trubisky, who lost his starting gig with the Chicago Bears to Nick Foles.

With 61.9 points on the year, James Robinson has been the FAAB-ulous find of the year. Robinson currently has more fantasy points than Josh Jacobs, Austin Ekeler, Nick Chubb, Tyreek Hill, and Travis Kelce. Although it remains to be seen just how effective Robinson will be in the long run, right now, he’s been propelling several teams to the top of the Razzbowl.

Yours truly remains stuck at the bottom of the main event. Rather than throw a pity party, I’d like to take a closer look at what moves put myself and others at a disadvantage. Overall, I’m not seeing too many experiences in bad drafting, but rather some big-name players that have had unexpectedly slow starts.

Joe Mixon — Joe Mixon has been one of the most consistent running backs in the NFL over the past few years, and he got a big contract just before the start of the 2020 season. However, the emergence of Joe Burrow as legitimate rookie QB has, well, floored Mixon’s value so far. Mixon is on the field, and he’s sixth in the league in rushing attempts, but the Bengals’ poor offensive line play (30th in the NFL in run blocking as ranked by Football Outsiders) has led to Mixon getting only 3.2 yards per carry. That’s worse than Frank Gore. Because Mixon is still getting a ton of carries and Burrow is likely to start utilizing his running backs more in the passing game, Mixon continues to have season-long upside, but his usefulness in the Razzbowl may be limited due to the cutline format. Unless Mixon starts racking up 100 yard games soon, teams that drafted Mixon as their RB1 won’t make it to the playoffs.

Leonard Fournette — Managers who drafted Fournette were hoping he would get a ton of use with the Jaguars in 2020, but it turns out that undrafted free agent James Robinson was the real deal, and Fournette ended up in a crowded Buccaneers backfield. Fournette had a huge game in week 2, but an injury is keeping him on the sidelines going into week 4. Many project a healthy Fournette to get the bulk of the workload in Tampa Bay, although his injury recovery will make it difficult for Razzbowl owners to recover from missed opportunities.

Cam Akers — Akers was a popular target among 0RB managers, although his usage in the first three weeks has been limited. With less than 7 points scored for Razzball teams, those owners that targeted Akers as their #1 or #2 RB have been scrounging the waiver wire for help.

Marquise Brown — Hollywood hasn’t gotten his star yet in 2020, with Lamar Jackson throwing a meager 192 yards per game. A popular WR1/WR2 target for many teams, Brown’s 60 combined yards in week 2/3 are best ball boredom.

George Kittle — Kittle went in the second round in most Razzbowl drafts, and he injured his knee in Week 1. He’s been off the field since then, and his QB, Jimmy Garoppolo, suffered a high ankle sprain in Week 2. With the 49ers running so many play action and RPO plays that depend on a mobile quarterback, Kittle may not get the yards that owners were expecting in 2020.

Good luck in Week 4 everybody!