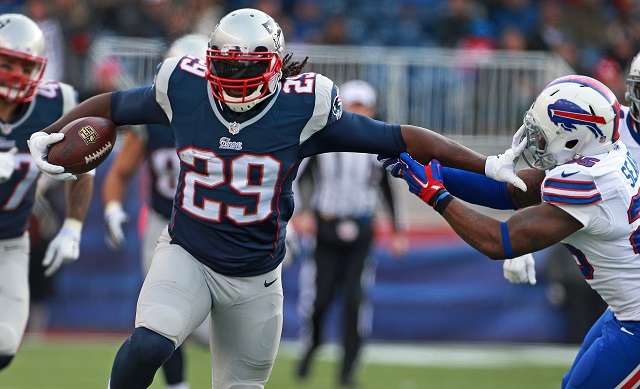 The Red Zone Channel is an absolute gift from the heavens.  If you don’t have DirecTV, you might not know that it’s a six-and-a half-hour broadcast on Sundays during the NFL season that switches from broadcast to broadcast of games where a team is in scoring territory.  It’s hosted by the legendary Andrew Siciliano and his abnormally large ears and it’s a dream come true for fantasy players.  There are few things more exciting than owning stock of a running on a certain team and yelling at the TV for the wide receiver on his team that’s sprinting down the field with the ball in his hand to get pushed out at the one or two so your running back can get the six points…

Also, check out our other sponsor, Fantasy Draft! They are having a 25,000 Freeroll DFS contest this weekend and you should check it out and try and win some cash! Here’s your chance to check out all of the enhancements that Fantasy Draft has made since last season!

The six points we get in fantasy football from a touchdown can make even a bad day for a running back a competitive score from that position.  40 yards today? Yuck! Oh, but with that touchdown added on, that running back put up a semi-useful double-digit day.   Although Legarrette Blount’s 72.6 rushing yards per game last season was the second highest of his career, he would not have sniffed high-end RB2 numbers last year without cashing in 18 touchdowns.  New England, by the way, ranked 10th in the league in red zone efficiency last season, which is good, but even better, is they ranked 3rd in the league with 3.3 touchdowns per game.

Red zone efficiency is something that a lot of fantasy players don’t think about.  Just as an example, players might be really high on Travis Kelce this season thinking that he will score his fair share of touchdowns this season since Jeremy Maclin has moved on and Kelce seems to be Smith’s favorite target.  While the Chiefs were 13th in scoring last season, they ranked 26th in red zone efficiency which directly correlates to Kelce’s career touchdown struggles.  There hasn’t been a significant enough change to the Kansas City offense for one to believe that Kelce can surpass his career high mark of five touchdowns.  Kelce will no doubt have a strong season, health permitting, with plenty of catches and yards, but whether the draft price is worth it or not is in the eyes of the beholder.

Lamar Miller is another example of a player who suffered because his team lacked in red zone efficiency. Houston ranked 31st in the league in red zone efficiency, much to the fault of Brock Osweiler’s incompetence leading to Lamar only scoring 5 touchdowns on the ground last year, despite 268 carries.  All of Miller’s 5 rushing touchdowns last season came from less than five yards, but he only received 8 carries inside the 5-yard line all season.  Those 8 carries inside the five ranked 20th in the league and it’s no wonder he failed to live up to his value.  One has to think even the slightest upgrade at the quarterback position will give Miller more chances to score making him most likely a great value being drafted outside of the top 25.  Todd Gurley is a very similar case study in this regard.  Gurley only toted the ball 10 times inside of the 5 last season and also was only able to convert 5 touchdowns, a big part of why the Rams finished 27th in the league in red zone efficiency.  But more weapons on the offensive side of the ball could open things up for that offense, Gurley included.

New Orleans is an example of a team that I want to have a lot of stock in this upcoming season.  New Orleans finished 3rd in the NFL in red zone efficiency last season scoring touchdowns on 66.18% of their drives that end up inside the 20 yard line and they ranked 2nd in the NFL with 3.4 touchdowns per game.  I have Michael Thomas, Willie Snead, and Mark Ingram all ahead of their average FantasyPros ranking in my Top 200 that came out last week.  Thomas and Snead combined for 13 touchdowns last year with only 4 coming from Snead.  By process of elimination, one has to think that number will go up for both with the departure of Brandin Cooks.

Dallas and Arizona are other great examples of teams who executed well in the red zone last season, ranking 5th and 6th respectively.  One of these teams has possibly the best offensive line that the NFL has ever seen, and the other has David Johnson.  Converting in the red zone is a big reason that David Johnson and Ezekiel Elliott finished 1st and 5th respectively on ESPN’s fantasy football player rater last season.  David Johnson carried the ball 22 times inside the 5 yard line last year and was able to punch it in 12 times from that range.

Red zone efficiency is definitely not a fool-proof way of making decisions on what fantasy football players you should draft.  Jordan Howard is a great up and coming fantasy football story and the Bears ranked 23rd in red zone efficiency last season.  Jordan Howard was able to finished 10th among running backs in his rookie season while only scoring six touchdowns last year (all of them inside of the 20-yard line) and he wasn’t even the starter for the first few games. But, previous data on red zone efficiency can be a tool that you can use as a fantasy owner to more accurately predict the amount of opportunities the players that you want to draft will have to score a touchdown.

You can follow MB on Twitter @Razzball_MB. And take MB on in the Razzball Commenter Leagues for a chance at prizes! Join here!