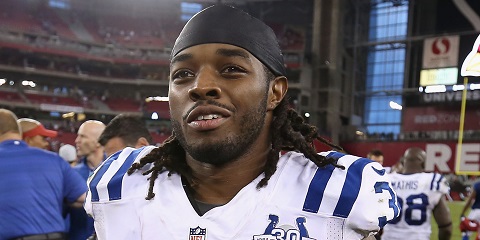 And by Black Hole, I mean “Heaven”, which is resoundingly considered as such in Oakland. It makes so much sense! After wondering a few days ago what actually happened to Trent Richardson, the Raiders wasted no time in trying to figure out if this once promising running back can actually produce something north of a 1-yard average run. Or be a better Maurice Jones-Drew. They signed him to a two-year incentive laden deal in what seems to be a natural match, and while I’m hesitant to think that this might change his future fantasy implications, I’d like to think that a change of scenery was needed here and that Richardson could end up being a productive back. Granted, production and Raiders aren’t exactly synonymous, but I want to give the benefit of the doubt here.

Chris Borland announced his retirement, nearly completing the worst off-season ever for the San Francisco 49ers. The retirement itself and the reasons are certainly justified, and there’s a growing sentiment that football’s future is in question because of it’s total failure to address the CTE issue with nothing more than a band aid.

I’ve long since believed that this is a real issue that the NFL could make positive changes in, but that’s also expecting some form of competence and empathy, something that NFL ownership and the commissioner seem have very little of. At the very least, we now know that players will do anything to not play for the 49ers at this point.

Benard Pierce was arrested yesterday morning for speeding and DUI (blowing a .09, which, coincidentally, was also his 2014 YPC), and was promptly released later in the day. You could say he had potential, but every opportunity he was given, Pierce simply did not produce. And while an immediate release was more to do with how the Ravens handled Ray Rice, this really isn’t a huge blow to a team that made Justin Forsett into an effective back. I could see Pierce going to the Colts, only because Jim Irsay probably thinks there was no wrong-doing here.

After the Chargers missed out on both resigning Eddie Royal and trying to lure Andre Johnson from the AFC South, they signed Stevie Johnson. There are some questions on how this affects his value, as his previous six years saw three consecutive 1,000-yard seasons, but also averaging 516 yards the past two years. You can certainly point to the schemes and roles he played with on the Bills and 49ers, but there’s no question that he’ll be paired with the best quarterback that he’s ever played with. But I probably wouldn’t dis God when around Philip Rivers… just my two cents.