Before I flip my proverbial switch to MLB, I wanted to share some reflections on a humbling 2018 fantasy football season.

As most of y’all know, I am a bit of an odd duck. Most fantasy football enthusiasts love season-long, DFS or both. I love building and maintaining in-season fantasy player projection systems. I like competing in the FantasyPros Accuracy contest better than season-long and DFS because it aligns better with that pursuit. Being almost 100% focused on running/improving the projection system (aka Pigskinonator) also aligns best for the needs of our subscribers so it is a win-win.

This was the 3rd year I competed in the FantasyPros NFL accuracy contest and there has been one constant throughout that time. I rank players further from ‘consensus’ than just about anyone. In 2016, I was the furthest from consensus (aka boldest). In 2017, I was the 2nd boldest. In 2018, I was the 4th boldest. The whole ‘boldest’ thing can be pretty obtuse so, to better illustrate it, see below for my Week 16 QB ranks vs consensus as well as those of 3 anonymous rankers that span a range from very close to relatively far from consensus. As you can see, ‘bold’ does not necessarily mean BONKERS. It generally means in line with consensus with a bunch of minor differences and a couple of major differences. 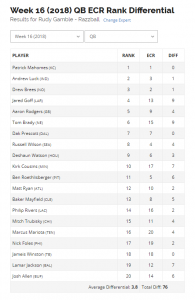 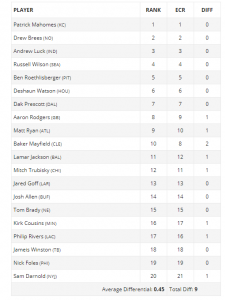 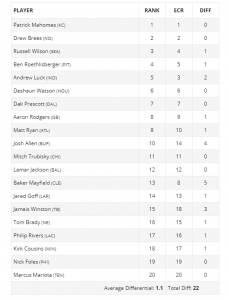 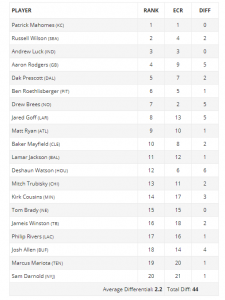 My objective has never been to be one of the boldest rankers. My overarching objective is to provide the most value to subscribers when ranking/projecting players. I do that by developing a player projection model and constantly refining it based on additional data/learnings. For NFL, I do weekly QA on the rankings and part of that process entails comparing vs ‘consensus’ ranks to determine whether outliers (guys I ranked much higher/lower vs consensus) are legitimate vs a ‘bug’ – e.g., something is not working right, the model needs tweaking, etc. For example, I discovered towards the end of the season that my weather data feed notes Rain as binary (either a chance or no chance) where it really is a projected percentage chance. My research on the impact on rain is BINARY as it either rained that game or did not. So all the rain factors were being applied whether there was a 5% chance or 95% chance of rain. I muted the impact of rain and am hopeful that my data feed will include percentages next season.

I would never intentionally build a model to be ‘bolder’. That does not make any sense. The goal is always to make it as accurate as possible. But if there is anything ‘bold’ in my approach, it is that if the projection appears legitimate, I publish the results and ignore the consensus opinion. I think this is how the minority of rankers who publish projections like myself operate whereas many that are doing manual ranking are influenced by varying degrees to the gravitational pull of the consensus ranks. Some experts are so close to consensus ranks that the only explanation is that they just use the consensus ranks and make a few minor tweaks – i.e., there is such little difference in QB projected points for QBs 6-20 that it is virtually impossible to not having a certain amount of random ranking differences vs consensus. But I know two other rankers who operate similar to me and their rankings are closer to consensus so my divergence from consensus is also driven by methodological factors as well.

I think there is significant value to my approach because so much of weekly season-long and DFS is finding the outlier – e.g., the WR primed for a big week who is still on waivers or the underpriced RB for a GPP. In addition, while I believe in the ‘wisdom of crowds’, I also think there is a groupthink/laziness factor that comes into play and I relish trying to be one step ahead of the consensus opinion on a player.

That said, this approach has its downside. The consensus ranks are not dumb. There are a lot of knowledgable fantasy football minds participating in the contest. It is smarter than the majority of ‘bold’ projections. If your #1 goal is to do well in the FantasyPros contest, the safer route is to hew close to the consensus rankings. This is exacerbated to some degree by FantasyPros’ methodology which penalized boldness by grading an expert on all players that 1) finish in the top x (20 for QB, 35 for RB, 40 for WR, 15 for TE), 2) the players the expert ranks in the top x, and 3) the players the consensus ranked in the top x. So let’s say I rank the consensus WR30 and WR50 at WR50 and WR30 and both get zero points. That SHOULD be a draw. But it is not. The expert who picked like consensus will only be graded on the WR30 guy (based on criteria #2 and #3) whereas I would be graded on both WRs (one because of criteria #2, one because of criteria #3). Remember how mad Football Analyst Twitter went when the Giants took Saquon Barkley at #2 instead of a QB/OT/DL/trading down? This makes me madder than that.

The correlation between Accuracy and Boldness from 2016-2018 ranged from -0.4 to -0.62. A negative 1.0 would be the maximum correlation (basically the boldest ranker is the least accurate) and zero would be no relationship between the two. In addition, of the 72 top 20th percentile finishes in the past 3 years, only four were in the top 20th percentile of ‘boldness’ (2016 – Jason Moore of The Fantasy Footballers at 83rd percentile accuracy / 94th percentile boldness, 2017 – Rudy Gamble at 96th/99th, Staff Rankings Daily Roto at 81st/93rd, 2018 – Dalton Del Don of Yahoo! at 94th/91st). The average boldness percentile for the top 20 percent finishers averaged around the 25th percentile.

Some other interesting observations before I talk about my 2018 performance:

I guess that is enough stalling. I finished 97th out of 122 in overall accuracy (ouch). It is impossible to sugar coat it. I’m super disappointed. It is still ‘ahead of the curve’ for being the 4th boldest from consensus but last year’s 5th place finish had me convinced I had a good shot at winning the conteset. It’s going to require a summer of digging/research to retool for 2019 but here are some highlights/lowlights/insights:

Anyway, thanks to FantasyPros for running the contest. Congratulations to Matthew Hill of DataForceFF.com on winning the 2018 contest. Congrats to my pal Dalton for joining me in the 90/90 club in accuracy/boldness.