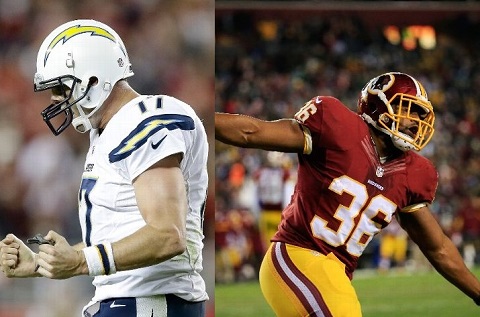 Well, I think it’s official. From this point forward, all Thursday Night Football should be played only on Saturdays. In what could arguably be called two of the best prime time games of the season, Washington, powered by the vengeance of DeSean Jackson and Mark Sanchez’s mediocrity, was able to deal a striking blow to the Eagles playoff hopes. (While I wouldn’t be surprised at the Cowboys losing two in a row during December, nye, one could almost expect it, the odds are still not with them.) And in Santa Clara, the 49ers looked like the three-time AFC Championship game team we all knew and loved before this season… for about two quarters. Unfortunately for them, the last two quarters, they looked like something you’d normally find due east of San Francisco. Oakland, for all of you unfamiliar with California geography. And with that, the Chargers came back, 21 points down at the half, to win in overtime and keep their playoff hopes alive. So when it comes down to it, Thursday Night Football, Saturday Edition, on the NFL Network, CBS Edition (not acronymed enough to be honest) ended up being two close back-and-forth games, with one ending up in overtime, and plenty of entertainment value (touchdowns) to boot. I’d call that a successful night of football. This is it, all is lost. The world is ending…

Week 16 Rankings have been updated for today’s games for all your roster needs. You can check them out here.

Philip Rivers – 33/54, 356 YDS, 4 TD, 3 INT. In other news, Philip Rivers has petitioned the league to force a certain receiver to change his last name to “Inwoman”.

Antonio Gates – 7 REC, 92 YDS, 2 TD. Call me crazy, but shouldn’t the Niners have been aware of Gates this game? At, like, you know, some point?

Dontrelle Inman – 7 REC, 79 YDS. Deep leagues might want to take notice here. He was undrafted back in 2011, but the Chargers like him, and there could be WR-3 potential next season.