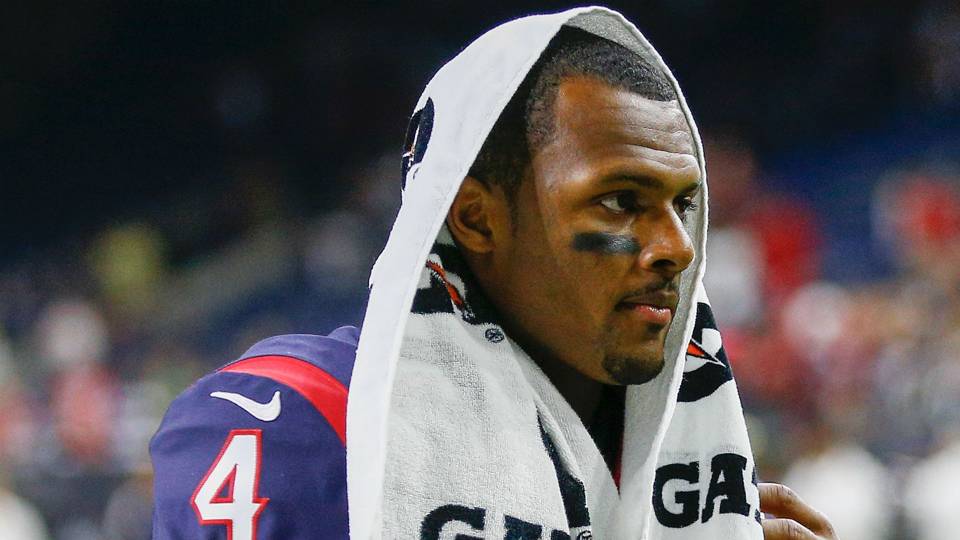 November 1, 2017 @ 1:30 PM: Me: have Dak Prescott and Deshaun Watson on my team. Decide to shop Prescott to a rival league member who was struggling with Jameis Winston and Philip Rivers as his QBs. 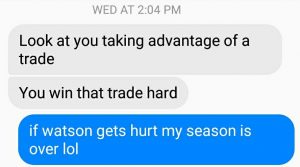 Tom Savage, HOU, 8.8% owned: Everything old is new again! The Texans week 1 QB is now their QB for the rest of the year after Deshaun Watson’s season-ending ACL tear. Savage is no Shane Falco so you can’t rely on him on any other week — but this week? This week he gets the Colts and even I scored 15 fantasy points against the Colts last week. DeAndre Hopkins and Will Fuller are still huge receiving weapons and will help Savage still have a respectable fantasy week. If you’re in a deep 2-QB league and need a Brady replacement Savage might be a good flier.

Drew Stanton, ARI, 4.6%: Another emergency injury fill-in for the deepest of the deep, deep leagues. Here is what I said on Tuesday about Stanton: “Here’s the deal with Stanton — in his last two starts against his week 9 opponent, the 49ers, Stanton has thrown for a total of 368 yards and 4 TDs with 0 INTs. This year’s 49ers have allowed the 4th most passing yards. I’m not expecting HUGE numbers, but 200+ yards and 2 TD’s is a feasible deep league option.”

Matt Ryan, ATL, 95.8%: I never thought I’d be listing Matt Ryan as a sit option after his MVP season but he’s averaging less fantasy points than guys named Eli Manning and Josh McCown and barely more than whose name sounds like a vacuum brand: Jacoby Brissett. The Panthers defense has been pretty stingy against the pass over the past 2 weeks averaging 3.5 fantasy points to the 2 QBs they faced. The Panthers have also allowed the 7th fewest passing yards this season.

Kirk Cousins, WAS, 91.8%: Before week 8’s 32 fantasy points allowed to da God Deshaun Watson the Seahawks were holding QBs to an average of 9.8 fantasy points. With no wide receiver stepping up for Washington and Jordan Reed suffering through another injury this week – I do not like that Kirk Cousin.

Orleans Darkwa, NYG, 17.8%: For better or worse Darkwa is the NY Giants starting RB as he lead the Giants in touches in week 6 and 7. Now, Darkwa and the G-Men get the LA Rams (I still keep writing St. Louis Rams) who have allowed the 4th most fantasy points to RBs. Week 7 wasn’t a great week for Darkwa (9 rushes, 35 yards) but in the right situation he is capable of breakout games like week 6 against Denver (21 rushes, 117 yards.)

Andre Ellington, ARI, 4.1%: This week’s PPR darling, Ellington is ranked in the top 10 in receiving yards among RBs and is facing the team that has allowed the most receiving yards to RBs. Andre will still be stuck behind AP on the depth chart, but in passing situations Andre will still be the man. He is 2nd on the Cardinals in passing targets after all.

Frank Gore, IND, 52.6%: Come on. Wake up the owner in your league who is still starting Gore.

Jay Ajayi, PHI, 51%: On the flip side of the Ajayi trade coin I can’t recommend you start Ajayi this week. Few things working against him: he is new to the team so he might not be 100% familiar with their playbook; it wasn’t like Ajayi was exactly lighting the world on fire (averaging 8.4 points); Ajayi gets the Denver Broncos who have allowed the second-fewest rushing yards and is the only team who haven’t allowed a rushing TD. I think for the rest of season Ajayi will be better — but bench him in this one.

Marvin Jones, DET, 55.2%: I’m just saying you can’t do better. Tell me have you heard that lately? I’m just saying you can’t do better. And I’ll start hatin’ only if you make me. If you’re without Antonio Brown you need to throw Marvin into your lineup. In his last three weeks he has 11, 21 and 18 fantasy points in a row. Matthew Stafford should be chucking the pigskin all over the Packers who’ve allowed an average of 33 fantasy points to opposing WRs including a big 4-7 against the Saints in week 7. And since you picked him up since Antonio’s not around.

Ted Ginn, NO, 35.6%: Ted Ginn has turned it on in a big way the past 3 weeks averaging 15 fantasy points. Ginn’s week 9 opponent, the Buccaneers, have allowed the 4th most passing yards to WRs this season. Ginn and Michael Thomas could go off in a big way with Drew Brees.

Marquise Goodwin, SF, 3.1%: With Pierre Garcon out for the year, time for Marquise Goodwin to step up as their WR1. Also benefiting Goodwin is the potential for Jimmy Garoppolo to eventually take over as starting QB for the 49ers. Garoppolo can’t be any worse than CJ Beathard.

Mohamed Sanu, ATL, 43.6%: Sanu has been doing a solid job as Julio Jones’s Robin, but will struggle against the Panthers defense in week 9. The Panthers have allowed the 5th fewest yards per game to wide receivers. The Panthers have also sacked the 2nd most QBs in the NFL leaving little time for Matt Ryan (see above) to get his passes off.

AJ Derby, DEN, 1.9% starting: Second week in a row I’m telling you to start AJ Derby and third time this year! Last two weeks Derby has notched 10 fantasy points each and now he’ll get the Eagles who’ve allowed the 6th most fantasy points to opposing TEs. Another 10 point week is in store for Derby!

Cameron Brate, TB, 72.9%: Don’t get me wrong, Brate is still better than most TEs out there, but he’s got a tough match-up on Sunday with the Saints allowing the 3rd fewest yards to opposing TEs. OJ Howard has also been swiping some of Brate’s targets and, for another week, Jameis Winston might not be 100%. There’s just a few things working against Brate that make me nervous to start him.

New Orleans Saints vs. TB: This ain’t your weird cousins Saints defense! They are actually in the top-10 in fantasy points scored. The Saints are also in the top-5 in INTs and top-10 for fumbles forced. The Saints are getting their takeaways where they can and if Jameis Winston can’t go — bump these Saints up another notch. They started from the bottom now the whole defense here.

Kansas City Chiefs vs. DAL: This game is going to be unbelievably fun to watch. The Teflon Don Ezekiel Elliott is STILL playing despite every lawyer in the country trying to shut him down and the score could easily be 53-49 somehow. Have fun watching this game — but not either defense.

Ka’imi Fairbairn, HOU, 22% starting: Ka’imi has been averaging 8.4 fantasy points on this year and now, without Deshaun Watson’s considerable talents, I could see the Texans offense stalling in the Red Zone or even in FG position leading to a big game from Ka’imi against the hapless, Luckless Colts.

No one really stands out! Go nuts with kickers!