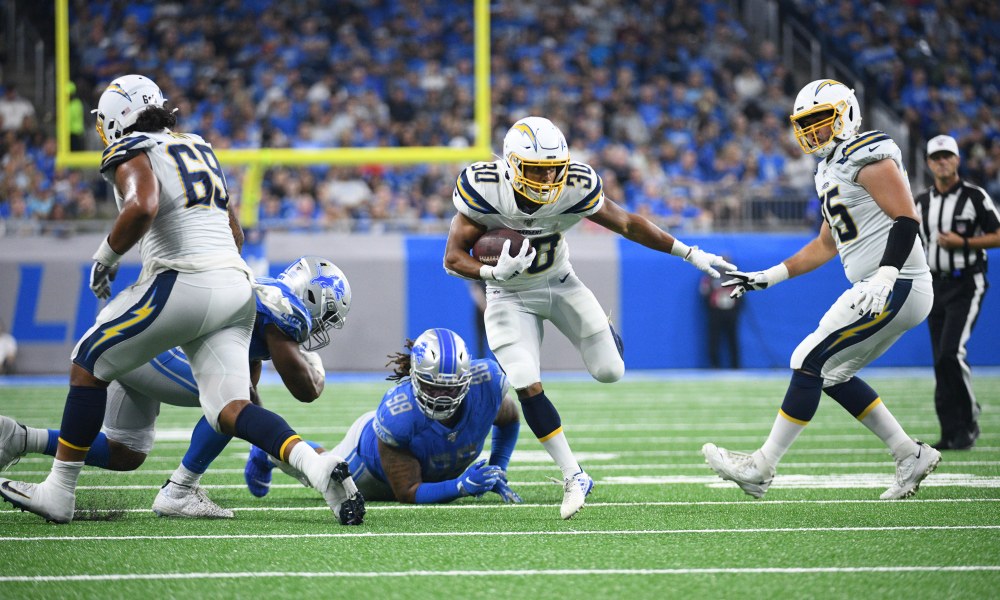 With 3 games in the rear view, now is the time where we can get a better, stronger look at our fantasy rosters. Who we can sell high on, who we can buy low on, and even better, which teams we can get a better idea of how we can best attack their defenses. Let’s talk about some players you can start this week, and those that you can sit.

The Miami Dolphins have not had a good start to their 2019 season. They currently rank 31st and 32nd in pass defense and run defense DVOA. I would not say that is ideal. Last week against the Texans, Rivers completed 46 passes, a season-high mark through 3 weeks of the season. Unlike this matchup, I don’t see him having to play catch-up with the Dolphins this go-round. Rivers is a great QB1 option this week with obvious Top-5 upside, even if Mike Williams won’t be able to play.

Well, it was a near-perfect debut last week for Daniel Jones, as he torched the Bucs defense, throwing for 336 yards, 2 passing TD’s, and 2 rushing TD’s. Well, for some critics, he only played this well because of how bad the Tampa Bay secondary was. Well, the matchup isn’t going to get any tougher this week as Jones will start at home against a Washington defense that has allowed more than 30 points each of their first three games. The Redskins have allowed the fifth-most fantasy points against opposing QB’s, ranking 27th in pass defense DVOA. Hell, if Mitch Trubisky can toss 3 TD’s against this defense, expect a whole lot more from the rookie.

While Goff and the Rams passing attack hasn’t done as well as we’d like to see of them through 3 weeks, I’m expecting a big turnaround at home against Tampa Bay. This is a Buccaneers secondary that has allowed 300+ passing yards to two of the past three QB’s that have faced them. Even better, this Bucs’ defense funnels production to the passing game, as they’re great against the run, ranking 2nd in rush defense DVOA. As a heavy home favorite, Goff and this offense should be airing it out plenty come Sunday.

Through three weeks, Brady has finished as the QB7, QB4, and QB12, and while it’s easy to continue to set him in our lineups and forget him, I can’t say he’s a solid start this week . The identity of the Patriots is one of “we’ll attack your weaknesses on defense, rather than to sticking what we’ve been successful at”. While the Bills are certainly the toughest opponent the Patriots will face through 3 weeks of the season, they are considerably weaker against the run than they are against the pass. The Bills rank 4th in pass def DVOA, but 21st in rush def DVOA. Even with the loss of FB James Devlin, I would expect a run-heavy Patriots offense this Sunday in Orchid Park. I don’t think Brady is a bona-fide QB1 this week, and if you have a better option out there, like a Philip Rivers or a Jared Goff, I would go with the latter.

Winston played really well last week against the Giants, which was expected, and while he is capable of repeating these kinds of performances, I don’t envision he’ll do the same this Sunday in Los Angeles. As we saw last Sunday night, this Rams defense can cause some problems even for the most loaded passing offenses in the game. Winston is as matchup-based as they come, and this matchup isn’t a good one, as the Rams rank 5th in pass offense DVOA. We’ll have to wait to start Winston when a better matchup presents itself.

While Allen has had a pretty good start to the year, you wonder if it has been largely due to the defenses he’s faced. Like Winston, Allen is matchup-based, and has done well against the Jets, Giants and Bengals, but now will face a much tougher opponent in the New England Patriots. Through 3 weeks, the Pats rank 1st in both pass defense DVOA, and rush defense DVOA. They haven’t exactly faced a QB as good as Josh Allen, but this is certainly a talented unit, and I don’t envision Allen causing many problems for this defense. I would look for other options this Sunday.

It’s a great matchup for Ekeler this week against a Dolphins defense that is very bad against the run. And while I do have my concerns about Ekeler ROS with the return of Melvin Gordon, that doesn’t worry me in the slightest this week. Not only is it a superb matchup, but the Chargers are without the services of both Justin Jackson and Mike Williams. I’m expecting a crap-ton of carries and targets tomorrow for the running back. He has a tremendous ceiling and floor.

While Kerryon hasn’t been setting the world on fire, and the Lions offensive line hasn’t been doing enough to create rushing lanes for him, this is a great matchup for both him and the O-Line against Kansas City. KC’s defensive line has been pretty bad so far, ranking 32nd in adjusted line yards, 32nd in rush defense DVOA,and 30th in rushing success rate allowed. With close to 18 touches per game, Johnson will see enough work to put together a very successful day in fantasy.

The rookie back has done well so far, and this week shapes up to be another great matchup for him. Through three weeks, the Colts defense ranks 26th in adjusted line yards, gives up 5.16 RB Yards, and ranks 30th in rush defense DVOA. Speaking to the press earlier this week, coach Jon Gruden said that they want to get Jacobs involved more in the passing game, and if they do just that, it will only had to his floor and ceiling. Jacobs is in a great spot this Sunday.

Like I mentioned earlier, even though Gore could get a good workload, it’s not a good matchup against the #1 rush defense, according to Football Outsiders. Projected outside of the top-30, Gore is an easy sit this week.

Both Barber and Jones have shown strides this year in the Bucs offense, neither is a recommended start his week against a tough Rams defense that ranks 9th against the run.

While the rookie has seen his snaps and touches go up week-by-week, and it now looks like he is in total control of this offense, this isn’t a great spot for him to be in. The Vikings defense is stout, ranking 8th in rush defense DVOA. If you don’t have any other options, he isn’t the worst start based on volume, but there are clearly better options.

Boyd is off to a great start in the 2019 season, averaging 8 catches per game, and already has a game with more than 100 yards receiving. While he hasn’t found the endzone yet, I think those fortunes might change against a Pittsburgh secondary that hasn’t had a lot to be proud of to start the season. Ranking 29th in pass defense DVOA, this is a prime matchup for Boyd to take advantage of, and the pass-heavy Bengals should have a great day on Monday night.

Well, believe it or not, McLaurin is the first receiver in NFL history to have at least 5 receptions and a TD in his first 3 NFL games. While the Redskins haven’t had a lot to hang their hat on this season, the fact that McLaurin has been so involved each and every week is something of note. This week, he’ll get another great matchup against the Giants, who boast a very weak secondary, to continue that streak. With Top-10 upside, McLaurin should have another great day.

Drawing in seven targets last week, Samuel might be the WR1 on the Panthers offense while Kyle Allen is still under center. This week, he’ll face off against the Texans in what should be another favorable matchup. In coverage, he’ll likely draw Jonathan Joseph, who has given up 216 yards in coverage and 1.94 fpts per target this season. Samuel is a very fine WR3/FLEX option this week as the Panthers offense should continue to roll.

While he has practiced this week in limited fashion, all signs point to Edelman getting the start this week at Buffalo. However, with the injury, and the tough matchup, I don’t think Edelman should be considered a lock on fantasy rosters. I think the ceiling for Edelman should be viewed as a WR3/FLEX option. The Bills secondary is the strength of this defense, and with Brady spreading the ball around in the manner that he does, I don’t think we should be expecting a great game from Jules.

After a good first two weeks of the NFL season, Sanders was held to only two catches last week against Green Bay. Not only was the fact that he finished with 2 catches bad, what’s worse, is that Courtland Sutton once again finished with more receiving yards. If Jalen Ramsey plays tomorrow, he’ll likely shadow Sanders. He’s far from a recommended start.

On the other side of the ball is D.J. Chark, who, like Sanders, has started well this season. He is, however, TD-dependent, and this matchup is a tough one against a very good Denver secondary. Projected outside of the Top-30, Chark is only viable in deeper leagues.

Dissly exploded last week, finishing with career-high finishes in catches and receiving yards, and once again found the endzone. He’ll get to face off against the Cardinals, who have struggled greatly against the likes of Mark Andrews and T.J. Hockensen earlier in the season. Dissly has tremendous upside once again.

While he will likely see a similar target share with Jack Doyle, which limits his upside a tad bit, with the injury to T.Y. Hilton, Ebron should see a great number of targets against an Oakland defense that hasn’t done well against the TE position.

While Witten has definitely been serviceable, the Saints are good against opposing tight ends, and I do think there is more value when it comes to the other aspects of the Cowboys passing attack. Outside of the Top-10, there are probably better streaming options this week.

The Cowboys offense should continue to roll, and this matchup should be a high-scoring affair. Maher should have plenty of FG and XP attempts indoors.

While the Chargers defensive unit hasn’t been too hot to start the year, and they are traveling to the east coast, those two talking points get thrown out of the window simply because they’re going to play against the Dolphins. Rinse, wash, repeat.

While the Bears are at home, I don’t see their offense being very successful and moving the ball down the field easily. Pineiro is far from a recommended start, and if you’re streaming the position this week, look elsewhere.

The Cardinals defense hasn’t been great all year, and while they are at home, Russell Wilson has done very well against them in his career, and should continue to roll.

Good luck to everyone in Week 4, and I will be back on Thursday for another edition of Ambulance Chasers!