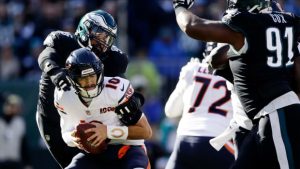 We often hear about whether a certain QB can “navigate the pocket” or one who “wilts under pressure” but what does that really mean? Often people saying those things are speaking anecdotally from what they’ve seen in games. What QBs really crumble relative to their ability when the play goes as planned? Why does it matter?

For fantasy purposes, it would be good to know who can’t succeed when pressured to avoid certain situations where appropriate. For instance, consider a QB who is terrible when pressured, has a mediocre offensive line, and is facing a top defensive line. Perhaps that would be a time to consider a streaming QB for that week or at least head into the matchup knowing where you are weak. Maybe the QB just lost a stud LT on the line and now there are going to be protection concerns. It would be wise to monitor that QBs performance and if there is a drop in output, now you may have reason to believe a trend is coming vs. passing one bad game off as a blip.

I looked at the difference in clean pocket completion rate vs. pressure completion rate for QBs with at least 200 attempts. I also included attempts under pressure per game as a reference as well.

Don’t Tread On Me

Mitchell Trubisky – Whew. MVP Mitch! That’s… not great Bob. He had the largest differential between clean pocket and pressure in the group by a large margin. To be fair, his completion rate in a clean pocket was actually tied for 3rd highest so it’s not all bad. Some self scouting should lead Nagy and Co. to do everything possible to limit Trubisky’s exposure to pressure.

One way to do that would be to max protect by keeping RBs in to block. In this scenario, David Montgomery would be even more limited as he wouldn’t go out for as many pass routes. Alas, I am not on staff for the Bears so they won’t be reading this or listening to me.

Lamar Jackson and Russell Wilson – Fantasy’s top QBs don’t seem to thrive under pressure according to their completion rates. However, both these players do excel when plays break down and can create with their legs. Jackson is still learning the game and frankly does so much else well that this can be forgiven. He isn’t pressured very often either, probably because teams would rather him throw in the pocket than escape for a highlight reel scramble.

Wilson shows up in part because his clean pocket completion rate is an incredible 83% so relatively speaking there is a “major” drop to his pressure rate. A pressure completion rate of 37% is actually mid-pack of the QBs evaluated. This doesn’t raise any red flags, both these QBs are MVP candidates.

Jared Goff – This is pretty gross. Not only does Goff have a pathetic clean pocket rate (27th/29), he also has a bottom tier pressure rate creating one of the highest differentials on the list. Nothing seems to be going right for Goff and the Rams, not even plays within structure. I have heard many cite the line woes and that Goff is fine if not pressured, but this implies the opposite. The Rams may have just spent a ton of money on a bad quarterback.

Tom Brady – I was surprised to see him with at bottom 10 completion differential, however it does make sense at his age. Father time is undefeated and if Brady was going to lose a tick anywhere, pressure rate would be a logical area to decline.

Patrick Mahomes – We know Mahomes is a god, but this is a remarkable feat. Not only does he have one of the smallest dropoffs from clean completion rate to pressure rate, but he also has the 6th longest distance per pass attempt (9.4 yards). So he’s not dumping off to the fullback. Mahomes’ only weakness may be his kneecaps, but otherwise good luck stopping him down the stretch.

Jimmy Garoppolo – Not bad Jimmy. His results for fantasy have been very blah except one magical Thursday against the Cardinals. But to his credit, he’s cool under pressure and can deliver the ball to one of his playmakers. Unfortunately for many of us, that’s rarely Dante Pettis.

Baker Mayfield – Well we know his issues aren’t being extra terrible under pressure. He’s just terrible regardless with 66% clean pocket completion rate. I was pretty high on Baker but this (among other things) is disappointing.

Deshaun Watson – One more example as to why he’s one of the best.

Dak Prescott – I think Dak was underrated both as a fantasy asset and real life QB heading into this year. Like Mahomes, he doesn’t crumble under pressure and also has the 3rd longest distance per attempt (10.1 yards). Really promising stuff from Dak.

Jameis Winston – Good thing his pressure completion rate isn’t awful because he’s getting killed back there with 12.7 pressures per game.

Derek Carr – Like Jimmy G, Carr is meh for fantasy but has shown some strides in one of his weakest areas. He’s bumped his pressure completion rate from 33.1% in 2018 to 41%. Additionally, Gruden and the Raiders have done a nice job limiting his pressures to a league low rate.

Like much of this Stat-o-Matic exercise, I don’t quite know immediately what the fantasy application of this information is. One thing I may use it for is to weigh how concerned I may be to play a QB in a matchup against a tough front 7. Or perhaps this could inform my level of worry about a team’s ancillary pieces against an attacking defense.

For instance, guys like Watson and Mahomes were already matchup proof but maybe Prescott is someone to be less fearful in a tough matchup. While you won’t be playing Jimmy G outside a deep 2 QB league, this data leads me to feel safer starting his weapons because I can be a little more confident he can get the ball out.

Nonetheless I had fun looking into it. I hope you had fun reading it! Appreciate thoughts or future requests in the comments.