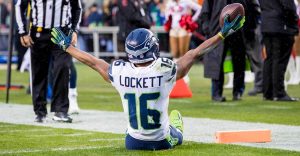 This will be the second installment of Stat-o-Matic where we will look at some advanced stats around the NFL. As a disclaimer, I am using this space to play around with some numbers and present some interesting findings. But, by no means is this validated or predictive data. I hope that it will lead to meaningful discoveries or it could inspire you to go down your own rabbit hole. We’re going to explore together, crunch some numbers and see what pops out.

I have been intrigued by the idea of the “big slot” WR archetype for some time. While he probably wasn’t the first (or De’Coldest) to ever do it, Larry Fitzgerald made waves when he transitioned into a 6’3″, 218lb jumbo slot receiver under Bruce Arians in Arizona. Michael Thomas (6’3″ 212) has found great success in the slot, as have Adam Thielen (6’3″, 200) and Cooper Kupp (6’2″ 204). In the past few years I have started to target primary slot receivers over 6′ and 200lbs in fantasy drafts.

Size isn’t the only thing that makes a good receiver but the traditional “slot WR” has always been a smaller player who is extremely agile to run short routes. The slot assignments would match up “lesser” cornerbacks against sneaky but harmless slot WRs, and the production would usually yield PPR value but little else.

The slot position has evolved, however as teams are lining up either their best receiver or a large pass catcher on these slot cornerbacks more often. DeAndre Hopkins, one of the best overall receivers in the game has lined up in the slot twice as often in 2019 compared to a 2018 (24.3% vs. 11.3%). Elite receiving tight ends like Travis Kelce find themselves in the slot over 30% of the time.

By putting their better receivers in the slot, an offense can likely avoid the defense’s best asset and gain favorable matchups. Additionally, receivers that may not be the prototypical laboratory stud can thrive in these easier one-on-one battles. As the NFL passing game has exploded in recent years, these types of receivers have become valuable for fantasy.

I wanted to take a look at primary slot receivers for fantasy in 2019, and Player Profiler can sort by PPR slot fantasy points (sFP) per target. I created a report of all 97 WRs with a sFP/target value. Then I trimmed the list to only WRs who have seen at least 5 raw targets per game while lining up in the slot for >50% of their snaps. The 19 WRs who qualified are listed below:

For context, since I was unfamiliar with this sFP/target, I calculated a median of that metric for all WRs on the report generated. The median came out to 1.6 sFP/target for the whole pool of 97 players. We can see that once trimmed to my criteria, only 9 are above the median 1.6 sFP/target.

Tyler Lockett – He isn’t the classic jumbo slot but this dude is just Mr. Efficiency. Slot or not he’s near the top of any FP/target metric. Imagine if Seattle let the offense run through Wilson/Lockett with 10+ targets a game.

JuJu Smith-Schuster – This is an encouraging finding especially for JuJu’s future. The volume is down in 2019 and the QBs have been bad but he’s still one of the most productive slot WRs in the game. His overall FP/target is not abysmal either, sitting 25th among WRs with at least 30 targets.

The biggest problem is that the passing game volume has tanked this year, averaging 11 fewer attempts per game than 2018. Even if he doesn’t have premier raw talent, JuJu can produce for fantasy out of the slot. I just hope the volume will increase in upcoming years. Perhaps the emergence of Diontae Johnson will encourage the Steelers to take more shots.

Chris Godwin – Wow, this guy is good. He’s great out of the slot and anywhere else. The target tree in Tampa Bay is narrow so sharing with Mike Evans isn’t a problem. Long term arrow UP.

Mohamad Sanu – Sanu was an interesting find here, ranking as a strong producer out of the slot. His volume was the main hindrance to fantasy relevance, but with the move to Foxboro perhaps he gets a bump. The Falcons are the most pass happy team in the league, but Sanu was never a focal point.

I think the versatile veteran will end up exchanging slot duties with Julian Edelman and potentially be a valuable piece of the offense moving forward. The Pats are likely to keep moving the ball through short passes. Of course there are plenty of mouth to feed, but looking at this made me more comfortable with Sanu as a bye week filler or deep WR3.

Cooper Kupp – It was surprising to find fantasy’s WR2 pretty far down this list. He’s obviously making a living off volume this year ranking 2nd in targets and 3rd in receptions. When the denominator is that high, rate stats can get diluted. If nothing else, he’s earning the volume and should continue to be Goff’s primary target in an offense that is happy to toss the ball near a league high rate. I have no concerns, if anything it’s remarkable that Kupp is actually better overall than specifically in the slot, meaning he may be a more well-rounded threat than we first thought.

Tyler Boyd – This player seems to be the definition of volume without substance. He’s in the league’s most pass happy offense and seeing the 3rd most targets in the league but really not doing much with them. Boyd seems to be especially limited to slot production as overall FP/target drops to a devastating 81st overall. This is concerning for a guy who really seemed to break out last year. Boyd may be a one trick pony and need a strong supporting cast to elevate him.

Christian Kirk – Yeesh. The volume we hoped for is there but this is some shocking inefficiency from Kirk. I know that the Cardinals offense has clunked along and there is a concerning lack of vertical threat to the scheme. The major bummer is he unfortunately missed the soft underbelly of the schedule too. An ankle kept him sidelined for dates with the Bengals, Falcons and Giants. Perhaps he’s adjusting to the slot position playing 72.2% from there as opposed to only 21.5% a year ago. Maybe he’s just better suited as an outside receiver. Ranking 8th in targets per game, Ill old on to the volume and hope things improve.