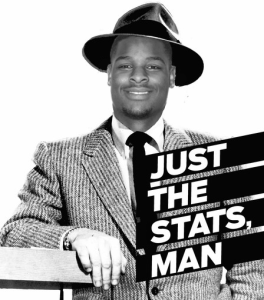 The 2014 fantasy football season is over Johnny. It’s over!

And the winner of this season’s Most Valuable Stats Machine Player is… Vernon Davis (10.16). Vernon Davis?!?! Wait a minute, that’s not correct. It seems I’ve accidentally opened the award for the Biggest Piece of Sh!t. This season’s top running back and top all around fantasy player is as clear as a bell. A Le’Veon Bell that is. On 290 carries, Le’Veon rushed for the second most yards in the league with 1,361 yards and scored 8 touchdowns. What made Bell so sexy was his dual-threat abilities. On 83 catches he hauled in 3 touchdown passes and 854 receiving yards which was tops amongst all running backs. He certainly had all the “bells” and whistles. Final Stats Machine Average Score Per Game: 30.41

Some say that life begins at forty. The Stats Machine says fantasy football begins with Forte! Second only to Bell, Matt Forte lit up The Stats Machine’s scoreboard all season. Forte eclipsed the 1,000 yard rushing mark by 38 yards, finishing with 1,038 yards and 6 touchdowns, and led all running backs with 102 receptions on 130 targets. Only three wide receivers caught more passes than Forte! And those catches netted him 808 yards and 4 more touchdowns. For those that don’t know, forty winks is another term for a nap. And Forte winks is the number of actual winks number 22 on the Chicago Bears gave his fantasy owners over the course of the season. Final Stats Machine Average Score Per Game: 29.99

While many might have thought this next running back would have ended up on top, those that got on the Murray go round this season certainly had one hell of a ride and surely got their moneys worth. Leading the league in carries (392), rushing yards (1845) and rushing touchdowns (13, tied with Marshawn Lynch), DeMarco Murray was a beast on the ground (despite also leading all running backs with 5 fumbles). While he might have had only 57 receptions, that was still good enough for fourth best amongst running backs behind Bell, Forte and Fred Jackson. During the holiday and fantasy football season I hope you all remembered to eat, drink and be Murray. Final Stats Machine Average Score Per Game: 28.13

You know who’s been at his fantasy owners’ beck “ham” call since week 5? That would be Odell Beckham Jr., this season’s top receiver according to The Stats Machine. In 12 games Beckham scored 12 touchdowns. The only other player in the league with a 1 touchdown per game game average was Dez Bryant. Many thought Josh Gordon would be the top player picked up off the waiver wire. WRONG! That honor goes to Odell who caught 91 of 130 targets for 1,305 yards. I wonder how high he will be drafted next year. I guess that depends on how much pot you smoke before you draft him. Final Stats Machine Average Score Per Game: 28.65

How now, Antonio Brown cow. Arguments could have been made to put Antonio in the top spot since he kept up his stats over the full 16 game season as compared to Beckham’s 12 games. However, I decided to go with the players’ final average score and with that Beckham won out. Leading all players with 129 catches, Brown ended with the most receiving yards at 1,698 and 13 touchdowns. Do you know what he said when the Steelers’ season came to an end last week? Brown out! Final Stats Machine Average Score Per Game: 28.06

A doubting Thomas is a skeptic who refuses to believe without direct personal experience. At least that’s what Wikipedia says. The Stats Machine says a doubting Thomas is a fantasy owner that didn’t think Demaryius Thomas would end up a top 3 fantasy wide receiver. Well put your doubts to rest. Thomas caught 111 of a league-high 184 targets for 1,619 yards and 11 touchdowns. Those are some top notch numbers, especially considering Peyton’s list of options in Denver. Final Stats Machine Average Score Per Game: 26.04

According to the Urban Dictionary, a “gronk” is a fool or a total loser. It also says that gronk is the sound Miss Piggy makes when Kermit mounts her. I don’t know about any of that, but it is kinda funny. In Stats Machine and fantasy football land a Gronk is the best tight end in the game. In 15 games he racked up 82 receptions, 1,124 yards and 12 touchdowns, putting him at or near the top of every offensive category. The next time you’re driving through New England don’t forget to honk for Gronk! Final Stats Machine Average Score Per Game: 21.33

Here are the stats… (Excel Spreadsheet)

Well that about sums it up for this year’s Stats Machine. I hope to see you all next year, but in the meantime I will see some of you on the baseball side of things in the coming months…