Week 15 is here and if you were lucky, you are still alive. This past week brought upon many injuries to some key players. This week I will analyze matchups to give you the best streaming options of the week.

We are a couple of weeks away from the playoffs and every game counts now. This week I have some interesting streamers that could potentially help you win while we get through the final week of byes.

We are now at the quarter-mark of the NFL season, believe it or not! We’re now starting to get a better feel for who we should be starting and sitting on a week-to-week basis, and which matchups are actually ones to target, rather than matchups that look good because of a small sample size.

There are some very interesting matchups on deck for Week 5, so let’s talk about some.

I’m pretty sure I could compare tonight’s Monday Night Football game to that of the first Presidential debate pretty closely, but I get kinda stuck at who plays the part of Donald Trump. Like, I think the obvious choice would be Sean Peyton, but then we’d have to inject his skin with Cheetos to get the correct pigment. Hey, if you’re going to do an analogy, you gotta go 100%. But since this is a day where football actually will finish second to something other than it’s own news, I don’t mind going ahead and just talking about the matchup tonight that features two dumpster fires. I’m actually talking about football this time guys. Yes, the eternal battle between two floundering NFC South teams not named the Panthers is on full display tonight as we get to see the idea of defense be dismissed and scorned like the silly idea that it is to both these teams. Generally, I’d usually pick the home team between the two, so the Saints get my vote (see what I did there?), but I think the real debate (did it again, red hot fire they call me folks) is how many points the teams score total. I’m guessing in the thousands, but you’re right, that number sounds a bit too conservative. (WOOOO. Trifecta baby!)

Ah yes, the required prime time NFC South showdown that’s required at least twice a year, featuring mediocracy at it’s finest, and always ending with 400 combined points, earned in the derpiest way possible. But this year might be different. Well, with the Saints 1-4, maybe just half different. The Atlanta Falcons, at a surprising 5-0, look to open the season with six straight wins. Which would also mean they would have consecutive road wins for the first time in 13 seasons. That’s basically the most NFC South thing I’ve ever written. Now, six wins would be a strong statement if it weren’t against such a questionable schedule and with such happenstance circumstances. That schedule has included the Eagles, Giants, Romo-less (or Weeden-more!) Cowboys, Texans, and Washington Potatoes. The circumstances? They’ve trailed in the fourth quarter in four of those five games… which essentially means they could be sharing a similar record with the Saints if not for a little bit of luck and something called Devonta Freeman. The same Freeman who used to make Trent Richardson seem useful. Can the Falcons and Freeman (and Julio Jones hamstring) keep the streak going? I don’t know, but if Sean Peyton’s lemon face is in full force tonight, I’d say: MAYBE.

Join myself and your peers in a special Razzball only Contest! Buy-in is just $5.00 and the top 12 finishes in a 55-team league are all part of the prize pool! Sign up here!

Rankings have been updated for tonight’s game and can be found here. 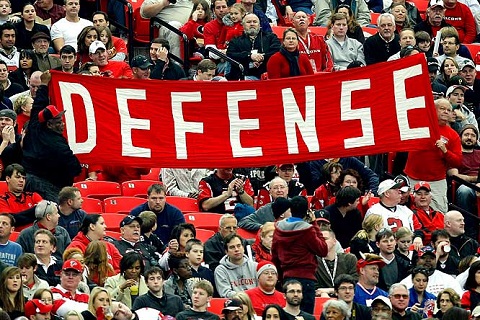 Imagine an alley my friends. And in that alley, imagine a dumpster. And, if you can, imagine a fire in that dumpster. Some would call it a “dumpster fire”. Good for them, because it’s a good name for it. I also have a good name. I call it “Falcons Defense”. After giving up the most yards in the NFL this season, and the only team not to register a sack, I think a new strategy needs to implemented. Just let the Buccaneers score so you can get the ball back quicker. I’m not sure you’ll win, but I’ll at least be very entertained. And as the scores would probably end up in the quadruple digits, I’ll probably be very turned on as well. Hey baby, what’s your name, what’s yo– holy sh*t, that’s like 28 touchdowns. MARRY ME.

Greetings! Ya’ll wanna see my face? Well, now’s your chance as for the second year in a row I’ve been handpicked by Andrew Siciliano to participate in DirecTV’s promotional fantasy football extravaganza. Receiving the opportunity to ask MJD and Roddy White questions pertaining to fantasy was like a dream come true for me, not so much unlike my other dream that came true of having Dina and Lindsay Lohan at the same time. God, that was hot. Anyway, I was only given a couple minutes and somehow managed to offend MJD by asking him if his quarterback is still seeing ghosts out there and also call Roddy, “Julio” 2-3 times. WHOOPS! Witness.

Welcome to Wild Card Weekend Razzballers!  We’ve got Tebow vs Ben Gimpy Burger, 5k vs 5k in Stafford vs Brees, Eli-te 4th quarter vs. Matty Ice, oh, and I guess the rookie pair of Yates and Dalton might be ok. The bulk of the fantasy points will most likely come from the Saints, Lions, Giants […]

I hope you all won every single matchup this week and if you didn’t I hope you cursed your opponent deftly. There were a lot of huge performances on Sunday and one of them probably made or broke you. Let’s hope you were made. Drew Brees: He completed 32 of 40 passes for 412 yards […]