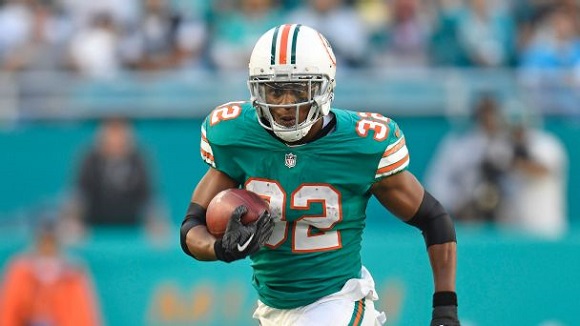 Welcome back to Target Practice! We have worked our way through the first round before getting into rounds two and three. Now, we can work on rounds four and five. But, before we get to the fourth and fifth rounds, have you joined an RCL League yet? You can win prizes and play against your favorite writers at Razzball. It’s totally free and really fun to play in 12 team leagues against other Razzball enthusiasts. If you want to play against me specifically click here to join. If you think I’m ugly, smell bad, or think my writing is trash but just needed to click on something to avoid connecting with your loved ones, we have plenty of other writers on board as well. Reid, Zach, B-Don, DonkeyTeeth, Rotowan, and Stan Son have all signed up to play this season.

Fourth Round (Let’s gamble on upside)

In the first couple of games after Jay Ajayi was traded to the Philadelphia Eagles, Kenyan Drake had a problem holding onto the football. As luck would have it, the teammate that he was in a timeshare with was Damien Williams, and he wasn’t doing much better. Before oddly limping to the finish line in weeks 16 and 17, Kenyan Drake absolutely exploded in the 3 weeks prior by gaining at least 120 all purpose yards in each of those games. We already knew that Kenyan Drake was a formidable change of pace back, but he showed last season that he has the potential to carry a decent work load. I think that Frank Gore being in a Dolphins uniform actually helps Drake’s fantasy stock. Change of pace and less grueling work for Kenyan Drake could be beneficial and help build on his breakout 2017.

JuJu Smith-Schuster had the best rookie season wide receiver season last year while many expected it to be Corey Davis’ crown. In the the three weeks leading up to his week 8 breakout the rumbles were starting to become roars that Smith-Schuster was on the verge of exploding and that he did. In week 8 against Detroit, Smith Schuster caught 7 balls for 193 yards and a touchdown. The following week, he found 97 yards and the end zone again. After a bit of a dry spell, JuJu bounced back in what would have been the fantasy football semi-finals and finals scoring 17 and 19 PPR points consecutively. He is the 3rd offensive option on a very explosive offense and that is if Le’Veon Bell joins the team after training camp. I’m going gamble on Smith-Schuster at this ADP because he can be a fantasy championship difference maker.

I am going to continuously push Larry Fitzgerald onto you until you never forget it and take him in every draft. He is such a great value again this season. The ageist haters always think that he is at risk of losing a step but he has caught at least 107 balls for over 1,000 yards in three straight seasons for the Arizona Cardinals. Whether it is a healthy Sam Bradford or a….. healthy Josh Rosen throwing him the ball, it’s going to be an improvement from Carson Palmer. With David Johnson back in the fold, this offense is going to be running a lot smoother as a whole. We keep waiting on J.J. Nelson to make the leap as well. The more pieces that work for this dark horse offense, the more red zone chances that the most trusted veteran in this corps with get. Fitzgerald is going off of the board at the very beginning of the fifth round according to Fantasy Football Calculator so I have no problem snatching him up in the fourth round.

Chris Hogan is going to play a huge role in the very efficient Patriots offense while Julian Edelman is suspended and I don’t expect that to change as much as you think it will when Edelman gets back either. This isn’t your bandwagon fan’s Patriots anymore. There are a few less offensive weapons than last year aside from Edelman’s absence. Malcolm Mitchell is gone, Jordan Matthews didn’t work out, Dion Lewis and Danny Amendola moved onto higher paid pastures, and Sony Michel is an injury concern. Chris Hogan scored a touchdown and had 128 yards receiving in a career game in the Superbowl. He had some consistency when he was on the field during the regular season as well. In 6 out of 7 games in weeks 2-8, he had at least 60 yards receiving and scored 5 touchdowns as well. I’m thinking that a 1,000 yard season could be on the horizon, all things considered.

Marvin Jones seems like he has been around the league for an eternity, well at least to me he does. He’s that journeyman receiver who came into the league for the blue collar Cincinnati Bengals before ending up not to far away in Detroit. He’s actually only 28 years old. You know what else? From week 6 and on, he had a wonderful season last year. In that time frame, he mustered up 6 touchdowns and gained at least 80 yards in seven separate games. In the first 7 games, the Lions play: the Jets, 49ers, Patriots, Cowboys, Packers, Dolphins, and Seahawks. Besides a very young but talented Green Bay secondary, do any of these secondaries scare you? I don’t think that they should.