Well folks, I promised NFC East derp yesterday afternoon, but the derp levels that were given are almost too much to bear, even a day later. So much derp in fact, that I’ll get to tell my grandchildren about how I was there for the (second, or maybe third, could be technically the fourth I guess) epoch of Brandon Weeden. In what was a 6-3 football game essentially (without a special teams touchdown) in the first 40 minutes of regulation, it wasn’t quite football, but wasn’t quite baseball either. What it was exactly, I can’t quite describe. If I had to give some sort of concrete answer, I would probably call it a nuclear weapons test. I will say this, as was alluded to earlier with one Brandon Weeden, the epoch began immediately after Tony Romo suffered a fractured clavicle bone (on the play shown above). Along with the news that Dez Bryant’s timetable for a return is murky now at best, this game still probably ended up more demoralizing for the Eagles. True, even with an existential outlook, you could say that the Cowboys lost the first two games they actually won (SO EFFING DEEP), but the Eagles look almost too innovative to be playing football at this point. If Romo (and by extension, Bryant) are out for an extended period of time (likely), and you combine that with the Giants doing very Giants like things, the Eagles have basically ceded the division to Washington. HAHAHAH. But don’t worry, Chip Kelly is still a genius. Totally.

Odell Beckham Jr. – 7 REC, 146 YDS, 1 TD. The top of Beckham’s head probably was based off a helmet from a 19th century Russian aristocrat.

Sam Bradford – 23/37, 224 YDS, 1 TD, 2 INT and 2 CAR, 9 YDS, 1 FUM. Here’s schismatics on what Sam Bradford looks like when he’s about to throw. Honestly, I’m beginning to think that double amputees have stronger and more accurate arms than Bradford…

Amari Cooper – 7 REC, 109 YDS, 1 TD. Finally showed something, almost as if just being in the city of Oakland and the overwhelming number of bails bondsman increases a person’s ability to run and escape would be tacklers.

Kirk Cousins – 23/27, 203 YDS, 1 TD. I’ll give credit where credit is due, Cousins and Washington in general were pretty solid. The third quarter was an interesting affair though, almost adding to the current total of meltdowns that prove my theory that this team is like an alcoholic dad on Christmas Eve. The first half of the night looks like a Rockwell painting. Then the second half of the night starts with pissing of the pants and ends with the falling into a tree with a car.

Jay Cutler – 8/9, 120 YDS, 1 TD, 1 INT and 3 CAR, 24 YDS. The Jimmy Clausen era (Re)Begins (Again)! Sort of. Cutler injured his hamstring on the play shown above (in what is probably the most Jay Cutler play that ever existed) and had to leave the game. He’s listed as doubtful for Week 3, which means the Bears fans might finally get what they wished for. And with Clausen, well, you know the saying…

Mike Evans – 0 REC, 0 YDS, 3 TGTS. Can we bring back the Giraffe so that Mike Evans can actually get a ball thrown to him?

Larry Fitzgerald – 8 REC, 112, 3 TD. Amazingly enough, this was the first time Fitzgerald has had three receiving touchdowns in a game. So I have to ask, who the f*ck killed Michael Floyd? Is he alive? Should we send search parties?

Joe Flacco – 32/45, 384 YDS, 2 TD, 1 INT and 2 CAR, 2 YDS. You might think this was good game from the stat line, but nope, this is what Flacco is. He floats around the line of above average until that one moment, in this case, an open Steve Smith Sr. in the end zone to seal the win, and then completely whiffs. Every time he does something like this, a Flaccoelitemeter explodes.

Melvin Gordon – 16 CAR, 88 YDS and 1 REC, 10 YDS. Melvin Gordon looking not bad! Seriously, buy low now. He had three rushes of over 20 yards this game, the first time that’s happened for the Chargers since LaDainian Tomlinson was in the backfield.

Jimmy Graham – 1 REC, 11 YDS. You know, I just feel like Seattle needs a receiver who played basketball in their receiving core, just to give that offense the extra weapon it needs to win these close games. Hey, didn’t Jimmy Graham play some sort of other sport with a round ball? Eh, nevermind, I’m sure it was it tennis…

Rob Gronkowski – 7 REC, 113 YDS, 1 TD. I see the Bills employed the “Let’s not cover Gronk” defense that worked so well for the Steelers last week. An effective plan, for sure.

Jeremy Hill – 10 CAR, 39 YDS, 2 FUM and 1 REC, 2 YDS. I’m not quite sure what Hill was benched for throughout the game. It could have either been the two fumbles or a knee injury in the first half. It’s a clear timeshare with Giovani Bernard (20 CAR, 123 YDS and 3 REC, 16 YDS), and has sort of been for a while, but Hill is the better back. Unless you’re a big pizza guy. Then you probably like watching Giovani and eating their delivery too.

Julio Jones – 13 REC, 135 YDS. Honestly, I would have rather watched Jones and ODB play a game of horse than this football game…

James Jones – 1 REC, 29 YDS, 1 TD. So let me get this straight… he was released by the Giants, but is now once again a budding star for another team? Yeah, that sounds about right.

Colin Kaepernick – 33/46, 335 YDS, 2 TD and 9 CAR, 51 YDS, 1 FUM. Kap had a solid game, but the 49ers are going to do this a lot more than what they did against the Vikings last Monday, and that’s look like a west coast version of the Cleveland Browns. The start-up company of sadness, if you will.

Eddie Lacy – 3 CAR, 9 YDS. “Lacy Carted off the Field” sounds like it would air on late-night Cinemax. He was removed on the opening drive from an apparent ankle injury. The x-rays came back negative, but don’t be surprised if this is something that lingers for now. Without a firm time table, I don’t quite think Starks should demand your undivided attention, but as a depth piece or in shallower leagues, you have to care.

Dion Lewis – 7 CAR, 40 YDS, 1 TD and 6 REC, 98 YDS. This pretty much happened because Rex Ryan’s defensive playbook is a sketchbook with “blitz” underlined and some doodles of ham.

Marshawn Lynch – 15 CAR, 41 YDS and 3 REC, 21 YDS. I wouldn’t worry. The Packers entire defensive plan was “stop Beastmode” and they ended up basically forgetting about the entire rest of the team.

Jimmy Manziel – 8/15, 172 YDS, 2 TD and 3 CAR, 1 YDS. If Maziel handed the ball off like this in USC, he’d be a Heisman winner. But who knew? All it took for Manziel to win a game was to play at home… against the Titans… and the Titans having food poisoning. I think this is a recipe built for future success!

Rishard Matthews – 6 REC, 115 YDS. Out of all the Matthews that could have had a monster Sunday, it happens to the one that no person has ever heard of…

Marcus Mariota – 21/37, 257 YDS, 2 TD and 3 CAR, 19 YDS, 2 FUM. No worries here, it’s only natural that while in Cleveland, Mariota would get the VIP tour of how Cleveland designs and manufactures it’s sadness.

Adrian Peterson – 29 CAR, 134 YDS, 1 FUM and 2 REC, 58 YDS. You really need to beat it into Peterson when it comes to the importance of ball security. Maybe one day he’ll switch his thinking on it.

Denard Robinson – 1 CAR, 9 YDS. I blame Jacksonville’s use of Denard Robinson on their “We don’t typically expect plays to matter in any game we are in, so let’s just do random things” playbook. It’s a wonder they actually know who Allen Robinson is. 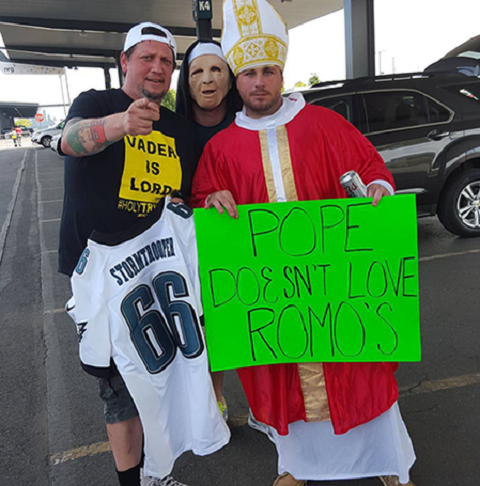 Tony Romo – 18/27, 195 YDS and 1 CAR, 12 YDS, 1 FUM. As stated in the lede, Romo went down yesterday afternoon with a fractured clavicle. We’ll know more today when the CT scan takes place, but it’s looking like a 8-10 week timetable for return, essentially ending his season in Fantasy Football. But on a positive note, we get to dust this gem off…

C.J. Spiller – 3 CAR, 7 YDS and 1 REC, 19 YDS. I keep trying to deny this Spiller stat line, but it keeps forcing its way into my eyeballs. It just grabs you, like it has claws or something.

Ryan Tannehill – 30/44, 359 YDS, 2 TD and 3 CAR, 17 YDS. I figured Tannehill would be okay, but Lamar Miller (10 CAR, 14 YDS and 5 REC, 28 YDS) was clearly affected by an apparently ankle injury, which Miller is downplaying. I don’t know about you guys, but my brain is going to start filtering out nonsensical phrases like “Lamar Miller is underrated this year” pretty soon… Damien Williams is your starter in Week 3 if Miller misses any time, but we’ll have to see how this develops. 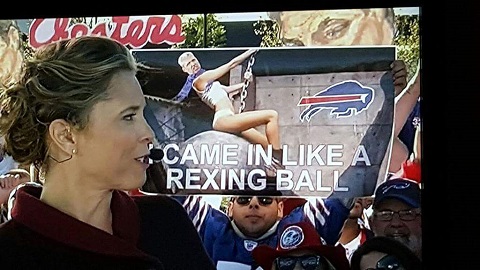 Tyrod Taylor – 23/30, 242 YDS, 3 TD, 3 INT and 5 CAR, 43 YDS. And just like that (and seemingly every single year), the Bills early season has already died a little bit inside. The Tyrod Taylor Experiment is not having the best of times so far, but he’s not exactly a bowl of suck, something the Bills are used to at the quarterback position.

Brandon Weeden – 7/7, 73 YDS, 1 TD and 3 CAR, 7 YDS. Brandon Weeden has thrown more touchdowns to a wide receiver than Alex Smith has in over a year.

Jason Witten – 7 REC, 56 YDS. I have dreams that I’m falling but Jason Witten is always there to catch me. Is that weird? 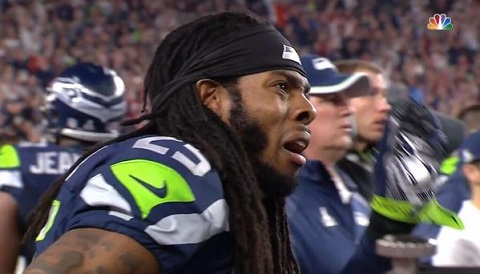