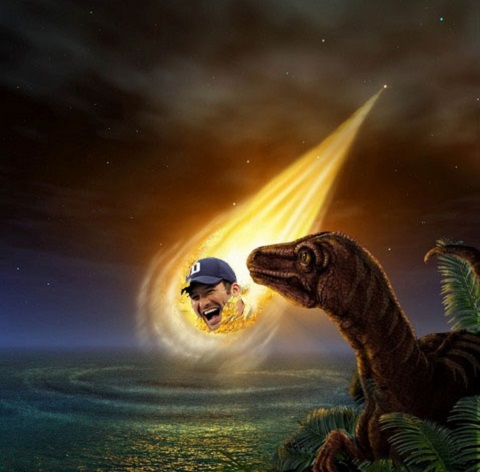 Steven Jackson – 12 CAR, 52 YDS and 1 REC, 0 YDS. Basically what you can expect from him, minus the year-ending injury. That happens later.

Jacquizz Rodgers – 6 CAR, 34 YDS, 1 TD. I’m so glad that someone named their child Jacquizz, and that this child became an NFL player, because the world needs to know about that name.

Devin Hester – 5 REC, 99 YDS. Who taught Devin Hester that he could catch anything that wasn’t kicked to him?

Jimmy Graham – 8 REC, 110 YDS. See Jones, Julio, above. But even more bacon. Remember, money can’t buy you happiness, but it can buy you tons of bacon. And that’s pretty effing close.

Adrian Peterson – 21 CAR, 75 YDS and 2 REC, 18 YDS. Peterson ran for 212 yards the last time this two teams faced. So I think we can state that the Rams strategy of letting Patterson destroy them instead worked amazingly well.

Zac Stacy – 11 CAR, 43 YDS and 1 REC, 8 YDS. Yes, I’m still onboard the Stacy train, and now that the Rams have zero-to-negative starting quarterbacks, I think you’ll see him getting fed pretty regularly.

Benny Cunningham – 5 CAR, 21 YDS and 4 REC, 30 YDS. There were a lot of things to like here, though in small increments. And while I believe Stacy remains the main guy, it never hurts to keep an eye on Cunningham. Or ham in general. Because ham is delicious.

Ben Roethlisberger – 23/34, 365 YDS, 1 TD, 1 INT and 2 CAR, 8 YDS. HARF HARF BEN DO GOOD? HARF HARF. (That’s my best Big Ben impersonation.) Related: Coming back from 24 down to tie it, and then lose on the final possession is the most Cleveland thing ever to happen. Browns gonna brown.

Ben Tate – Was forced to leave the game in the second quarter with a knee injury. He had looked effective before leaving, but Terrance West looked even more effective, and I wouldn’t be surprised, depending on the severity of the injury, if we don’t see more of a timeshare here.

Markus Wheaton – 6 REC, 97 YDS. You know who told you to buy Wheaton? Smokey did.

Jordan Cameron – 2 REC, 47 YDS. Cameron was expected to return, but was forced out of the game with an apparent shoulder injury. He also missed time with a shoulder injury during training camp, and as of now, you should try your best to ignore who Jim Dray and Gary Barnidge are.

Nick Foles – 27/45, 322 YDS, 2 TDs, 1 INT. First half: I haven’t seen Eagles fans this excited about a QB since Kevin Kolb! Second half: So how about that Foles guy, everybody? He’s gonna be something special! Also: Jacksonville gonna go get jax’d.

Toby Gerhart – 18 CAR, 42 YDS and 2 REC, 15 YDS. So… yeah. Probably not one of those fantasy performances you’d expect to see from a starting running back, unless you’re a Ray Rice owner. Then again, I didn’t draft him anywhere, nor did I want to, so cool story… bro?

Jeremy Maclin – 4 REC, 97 YDS, 1 TD. It appears as though if Maclin survives the season, he should be pretty good.

Allen Hurns – 4 REC, 110 YDS, 2 TDs. Siri, while you’re looking up Austin Davis, please tell me who Allen Hurns is. To be honest, I’m teetering on what I saw here. Is he the next Kevin Ogletree? Maybe. I believe Marqise Lee and Allen Robinson are better receivers, but at this point, if you have, say, an Aaron Dobson on your roster, I’d put in a waiver claim just to see what happens.

Darren McFadden and Maurice Jones Drew – 13 CAR, 26 YDS and 3 REC, 18 YDS. I combined their stats to try and make it look better, but to be honest, I think this actually makes them look incredibly worse.

Chris Johnson – 13 CAR, 68 YDS and 5 REC, 23 YDS 1 TD. This is probably who he is, a mediocre flex option, except for those random games (a total of three) where he just completely goes apesh*t on someone.

Tyler Eifert – 3 REC, 37 YDS. After getting his elbow dislocated to a new time zone, it appears his elbow “popped right back in.” Appetizing. “He’ll still have to let the ligaments in there heal some before getting back on the field.” The Bengals are hopeful he will only miss a few weeks.

Steve Smith – 7 REC, 118 YDS, 1 TD. Man, who would’ve guessed the offensive combination of Joe Flacco, Gary Kubiak, and a 60 year-old Steve Smith would be anything less than a powerhouse? (Ignore the fact that Steve Smith face-masked himself into the endzone off an 80-yard catch.)

Fred Jackson and C.J. Spiller – 23 CAR, 113 YDS and 6 REC, 24 YDS, 1 TD. Combined, because this is probably what you’ll be getting the entire season sans any injury. Then just replace one of them with Anthony Dixon. So what you have here, essentially, is one complete running back, but divided by two, and then divvy’d up onto your fantasy team to be multiplied by your tears of frustration.

Alson Jeffery – 5 REC, 71 YDS. Wondering what happened to Jeffery towards the end of the game? According to Marc Trestman, Jeffery suffered a hamstring injury, but he seemed to downplay it… “Alshon was prepared to go in there at specific times. I’ll just leave it at that.” Okay? It was reported he was walking without any limp, but unfortunately I couldn’t find out if there were any bizkit’s involved.

Martellus Bennett – 8 REC, 70 YDS, 1 TD. I may have underestimated his fantasy relevance. Then again, the Buffalo Bills did win this game, so crazier things have happened.

Jordan Reed – 1 REC, 4 YDS. Trying to do his best impersonation of Rob Gronkowski, Reed will be heading for a MRI on his hamstring. He suffered the injury when trying to hurdle a defender early in yesterday’s game. So he essentially injured something while jumping… nothing about this surprises me.

Niles Paul – 4 REC, 86 YDS. If there’s an extended absence for Reed, there might be something here in Paul. There are probably better options available on the waiver wire, but this is very league dependent.

Jake Locker – 22/33, 266 YDS, 2 TD and 6 CAR, 14 YDS. A good sign, and I feel myself quoting myself very soon. Hey, look at that! “I’m not saying he’s a top-15 QB, seeing as how I have him at a QB19 right there in parenthesis, but it’s no secret that the offensive scheme he’s now a part of feeds off of high-accuracy short and mid passes, and with the majority of his running backs and receivers having yards-after-carry potential, well, let’s just say I’m one of those crazy people who thinks that if the team’s offense does well, so will the quarterback. TOO CRAZY.”

Bishop Sankey – 6 CAR, 25 YDS. Not terribly surprising, as ball control issues have a nasty effect on how many times you get to touch the football.

Justin Hunter, Nate Washington, and Kendall Wright – 13 REC, 168 YDS, 1 TD. Just divide that line by three and you pretty much have their end-of-game line. I think both Hunter and Wright will get a higher volume, but I’m worried that this is the best they could do with what appears to be just a terrible Chiefs defense.

Ryan Tannehill – 18/32, 178 YDS, 2 TD, 1 INT and 3 CAR, -2 YDS. I do think we see an improved Tannehill this year compared to last season. Did we see that improvement this game? My definitive answer to this question is– maybe? 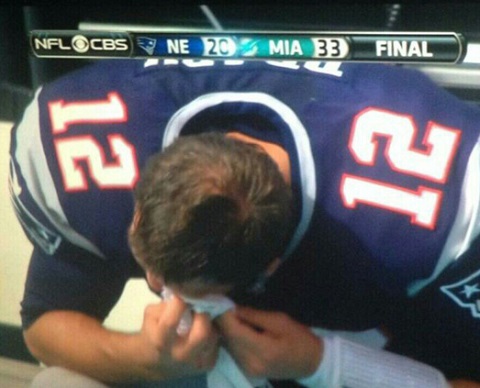 Julian Edelman – 6 REC, 95 YDS and 2 CAR, 21 YDS. Edelman was the second leading rusher for the Patriots, and only needed 15 more yards to pass Shane Vereen for that illustrious title. Really says a lot about the Patriots running game. In that, it doesn’t exist quite yet.

Rob Gronkowski – 4 REC, 40 YDS, 1 TD. I don’t see anything on the injury report, so I’m just assuming the report is wrong.

Knowshon Moreno – 24 CAR, 134 YDS, 1 TD. So I think it’s safe to say that this is no longer a tandem and that the Lamar Miller hype-train might be derailing for the 84th time. Frankly, I stopped riding on it the 37th time, but 36 trips doesn’t look much better than 84 trips. Well, I mean, it does, but that’s a lot of train rides is what I’m saying. CHOO CHOO, whatever.

Derek Anderson – 24/34, 230 YDS, 2 TD and 3 CAR, 10 YDS. Despite Anderson showing us he’s the real deal (italicized, since I really have no other way to highlight sarcasm at this point in time… gotta work with the technology we have, ya know?), Cam Newton, who was held out of the game, is expected to play in week two.

Doug Martin – 9 CAR, 9 YDS and 1 REC, 7 YDS. Couldn’t finish the game due to a left knee injury. With a line like that, I would have listed it as a left-ego injury.

Kelvin Benjamin – 6 REC, 92 YDS, 1 TD. I had some kind of Bob Marley “We’re Jamin'” joke, playing on Ben”jamin”‘s last name, but it never came to fruition. But you get fruit, so there’s that. You actually don’t get any fruit. Sorry.

Carlos Hyde – 7 CAR, 50 YDS, 1 TD. Looked so much like a beast with a football, Andrew Luck was jealous. He should not be on waivers anywhere.

Dez Bryant – 4 REC, 55 YDS. Was taken out of the game for a bit because of “dehydration”. That’s a nice way to put “nausea from the Romonobyl fallout”.

Montee Ball – 23 CAR, 67 YDS, 1 TD and 2 REC, 16 YDS. Not particularily inspiring… I mean, it’s pretty clear how I feel, and it’s not like I want him to fail (unless it’s against the Chargers), but I still didn’t see any of the hype that’s been spread like wild fire among my peers. Let’s see how it continues to play out…

Ahmed Bradshaw – 3 CAR, 15 YDS and 5 REC, 70 YDS. My officially anointed “prized-sleeper-that-I’ll-be-completely-irrational-about” this year, I liked what a saw, despite a game in which the running game just wasn’t there. He found a way to get production, and like I said, if he’s healthy, he’s the best running back on the team, and it’s not close.

Reggie Wayne – 9 REC, 98 YDS. Declared himself “120% healthy”, which seems like a not real number. Perhaps he hasn’t recovered from math yet?