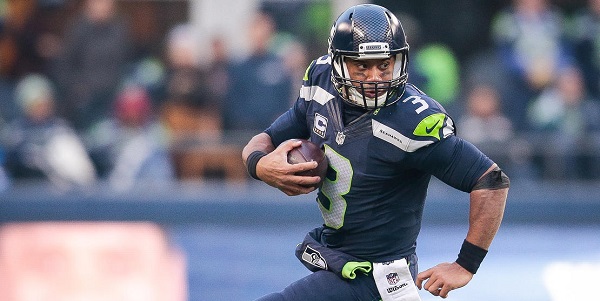 Welcome everyone to Week 4 of the NFL Season! What a week, huh? I’m not talking about the NFL season, I’m talking about the wonderful week Rudy and the crew had last week and so far this season! If you haven’t heard the news, our Razzball NFL projections are Top 5 on accuracy so far in 2017 on FantasyPros.com, and Top 3 on boldness!

As I have said since the beginning, if you haven’t subscribed yet to our tools, you are simply wasting money!

Wilson and the rest of the Seahawks offense has gotten off to a rough start to his 2017 season, but has finally showed some signs of life last week against the Titans. Well now he comes back home to CenturyLink for a primetime showdown…. versus the Colts. Well it’s a great matchup for him against the Indy secondary, and the projections have Wilson as the #1 QB.

The Eagles secondary really didn’t show up for the second half of their Week 3 matchup versus the Giants, and now have to travel across the country to Los Angeles to face the Chargers. L.A. hasn’t gotten off to a good start at all, and I’m not expecting for the Chargers to come out and dominate, but at home in a likely shootout, Rivers should do well against this Eagles secondary.

Although I don’t expect for Buffalo to be competitive against the Falcons in ATL, but if you need a streaming option, Taylor is a sneaky play. The game has shootout written all over it, and Taylor should be a primary factor in this game. If you’re a Derek Carr owner, Taylor isn’t the worst QB in the world to stream.

Nope. Carr has a horrible track record against Denver, and after that horrid Week 3 performance against Washington, I have no interest in stopping him.

I have to expect, I’d expect that Ajayi would have a higher ranking, but I love Ajayi this week nonetheless. Although Stewart and McCaffrey didn’t do as well as I expected (still serviceable), I think Ajayi should create matchup nightmares for the Saints rush D. And hey, double bonus, he’s a London native!

Another game with a high shootout potential, Cook should be very productive both on the ground and through the air once more against a Detroit rush D that ranks 16th against the run according to Football Outsiders. Because of sheer volume, he’s a lock for a Top-10 finish.

I love Powell this week. First off, the matchup is pretty great against Jacksonville, a defensive unit that ranks 32nd against the run, per Football Outsiders. Second, it’s likely that Matt Forte will either not play at all or be very limited in snaps, leading to the belief that Powell will dominate in touches and snaps. third, if there is a fear that the Jets get blown out early like they blew out Baltimore, Powell should still get passing-downs work. Powell is a great sneaky flex play.

I admit, this is cheating, I’ll give one more name, but if you weren’t already going to sit Gore…. sit Gore.

This is a bit shocking, although he is projected to do better in PPR scoring. I’m not really sure why McCaffrey is so low on Rudy’s projections, but I can say one thing is for certain: Rudy is probably right. The Panthers offense has been pretty god-awful through 4 weeks, and my guess is that it continues to stay the same.

Like I mentioned with Rivers above, this is a good spot for the Chargers offense, and Allen should have the best fantasy day out of any of Rivers’ weapons. Allen should draw Patrick Robinson in the slot, a great matchup for the receiver.

Another fantastic matchup, Landry should draw P.J. Williams in the slot, not only the best matchup of any WR/CB battle, but Landry is projected as one of the highest WR’s according to our projections. We love Landry this week. It’s time you start to as well.

Sanu has certainly played well to start the season, and now is climbing up our weekly rankings against the Buffalo secondary in what is expecting to be a shootout. Do I think Sanu will finish as a Top-20 receiver this week? Well, it’s hard to say, but Sanu looks primed to have a productive game in a plus matchup. He’s definitely in the conversation as a flex option in deeper leagues.

Yeah, I have no interest in any part of the Raiders offense this week against Denver. Crabtree will be drawing Talib this week in all likeliness, and I would just rather someone else.

I really am high on Clay this week in my rankings, and I’m glad to see that the projections like him as well. It’s a great matchup, and Clay is already Taylor’s go-to weapon in the passing game who’s name isn’t LeSean McCoy.

He still is in the Top-12, so he isn’t the absolute worst option against Minnesota, but I would just rather find someone else (Cameron Brate!).

He’s been very accurate to start the year, and that should continue in this great matchup.

They are on the road, but the Bengals defense has been pretty consistent thus far and now get to face off against the Browns. If you’re streaming, you’re using the Bengals.

This is a tough call. They are a good unit and at home, but because the Lions offense is just a high-powered one, I think I would try to find another unit to use this week. Thanks to garbage time, Stafford should still be somewhat productive, even though I’m not actively using any Lions this week.