The NFL COVID opt out deadline passed last week and it was more uneventful than my high school social life. On the offensive side of the ball, we lost a handful of o-linemen and a few dart throw wide receivers, but the only big news was Chiefs running back Damien Williams taking a passing on the 2020 season. This opens the door for first round rookie Clyde Edwards-Helaire to take on a much larger workload and jump into the top 10 running backs, which have been updated accordingly. As Rudy Gamble so eloquently put it, the early season CEH overdrafters are sooooo lucky! In other news, Razzball offered me a voucher for a free oil change at Cledus’s Auto Salvage if I opt of out of writing this year. Still thinking the deal over as the deadline approaches, but in the meantime, here’s my top 20 tight ends for 2020 PPR fantasy football:

11. T.J. Hockenson – Jake Ciely joined me on my show, Donkey’s Advocate, last week to explain why he loves Hockenson this year:

Find more 2 minute episodes of Donkey’s Advocate here. As for Hockenson, I’m with Jake; Hock is a beast and it’s only a matter of time before he climbs the latter to elite fantasy tight end. If Stafford and Hockenson are both healthy in 2020, big things are in store for last year’s #8 overall pick in the NFL Draft.

12. Tyler Higbee – First point in favor of Higbee: he finished last year with 69 receptions. Nice. Much has also been made of the Rams’ heavy usage of 12 personnel (two tight end sets) down the stretch of the 2019 season. Higbee enjoyed huge success during this run, with four 100+ yard receiving games in the Rams’ last five. The real question surrounding Higgy is whether McVay leans back in on those 12 personnel sets, or moves back to primarily eleven personnel if their offensive line returns to form. Regardless, this might just end up being one of those instances where you can’t put the genie back in the bottle.

13. Jonnu Smith – I’m not sure if we’ve seen the last of Delanie Walker, he’s like the Frank Gore of tight ends. But it does seem that we’ve seen the last of Walker in Tennessee, which opens the door for Prince Jonnu to fulfill his promise as a TE1. He’s an athletic specimen who has a chance to be relevant even in shallow leagues with Tannehill and Vrabel steering the Titans toward Mt. Olympus.

14. Blake Jarwin – To all football fans’ delight, Jason Witten left the Monday Night Football booth in 2019 to return to the Dallas Cowboys. The only person disappointed by this decision was Blake Jarwin, who was pushed aside as Witten caught 63 passes for 529 yards and 4 touchdowns. Now Witten is gone—thankfully not back to the announcers booth—and the Cowboys inked Jarwin to a four-year 22 million dollar deal. There’s no reason to think the 26-year old can’t slide right into Witten’s workload—in the Cowboy’s offense, not the announcer’s booth.

15. Dallas Goedert – I’ve written a new screenplay, it’s called Waiting for Goedert. It’s about a balding middle-aged man living in his mother’s basement, talking to his imaginary girlfriend while waiting for Goedert to become the number one tight end in Philadelphia. While it may never happen, Wentz and the Eagles offense is still capable of kicking out two useful fantasy tight ends.

16. Mike Gesicki – Every preseason there’s a couple mid to late round tight end targets that catch Game of Thrones season 7 type hype from the fantasy world. Gesicki is one of those guys this year (along with Higbee). The second rounder from the 2017 draft has been a little on the slow side to develop, but enjoyed a very productive late season stretch in 2019 when he caught five touchdowns over the final six weeks with Fitzmagic at the helm. The Dolphins should still be terrible so expect plenty of reason to throw the ball around down on South Beach this year.

18. Jack Doyle – After a large 2017 season Doyle ran into a string of bad luck, losing most of the 2018 season to hip and kidney injuries. Those sound more like ailments I’d expect from my 90-year old grandpa than a 28-year old football player. Drink your prune juice, Jack! Anyway, when Jack came back in 2019 Andrew Luck did not, and Eric Ebron had also usurped his role. Now Ebron is out of the picture and Philip Rivers comes to town with his 86 children. There’s new hope for Doyle to rule.

19. Chris Herndon – After a promising rookie season, 2019 was a lost year for Herndon. After a 4-game DUI suspension, he then missed a couple games with a hamstring injury before being placed on the IR with a fractured rib. With Sam Darnold hopefully past the kissing disease, the stage is set for a potential breakout season for both Herndon and the Jets offense as a whole.

20. Eric Ebron – I sound like a broken record at this point harping about my concerns about Roethlisberger’s elbow. So I’ll just talk about that beautiful beard Ben shaved off instead. Rape accusations aside, do you trust a man who would shave this beauty of a beard off? 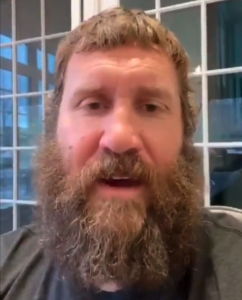 Me neither. But if Big Ben is once again the Rothlisberger of yore, then the athletic Ebron could be in for a nice rebound season. Keep him on your radar.

21. Irv Smith – Irv the Perv’s situation is a lot like Fant. A gifted 2nd year tight end, looking to take a step forward in 2020. Smith benefits from a seasoned quarterback behind center plus Diggs leaving town frees up a bunch of targets. I expect Irv yields similar week-to-week volatility a la Fant, but either of these big men are talented enough to make the jump into must-own tight end territory early in the 2020 season.

22. Jared Cook – Fantasy footballers have been chasing after Brees’ tight ends ever since Jimmy G left town. Those tight ends have been mostly yawnstipating until Cook came to Bourbon Street last year, catching 9 touchdowns and a ton of beads. My concern with Cook is he only caught 43 passes last season, so over 20% of his receptions went into the end zone; a number that seems destined for regression. I also love Emmanuel Sanders working out of the slot in the Big Easy and expect he’ll steal a bunch of Cook’s redzone targets.

23. Ian Thomas – The Panthers have a new QB, new head coach, new offense and new underwear. The new drawers is a certain positive, but it’s TBD on all the rest. Although the odds that Teddy Bridgewater is worse than Kyle Allen seem slimmer than my chances of ever being touched by a woman. Also, Greg Olsen is now in Seattle so Ian Thomas has his chance to be the man in Carolina.

24. O.J. Howard – This feels like a flimsy limb to climb out on after the egg Howard laid last year. Speaking of last year, I knew I shouldn’t have taken tight end fantasy advice from O.J. Simpson. We’ve seen Brady succeed using two tight ends in the past with Gronk and that other guy who killed those people. No not O.J., the other guy. But there’s a bunch of mouths for Brady to feed like baby birds in Tampa this season and who knows, Cameron Brate might even be ahead of Howard.

25. Dawson Knox – Another tight end, another promising rookie season. I would’ve been a little more excited about Fort Knox if the Bills hadn’t traded for Diggs over the offseason. Not sure how the targets will shake out in Buffalo this year, but if we learned anything from Diggs’ time in Minnesota, it’s that he’ll be wanting more than his fair share of looks.

26. Jace Sternberger – The Packers tight end position reminds me of what I said about the Saints previously. Fans always try to get excited about Rodgers’ tight end ever since Jermichael Finley had a few good games back in 2011. We all know Rodgers likes tight ends, but not necessarily the football position if you know what I’m getting at; he like guys’ butts. Not that there’s anything wrong with that. As for Sternberger, I expect he picks up Jimmy Grahams’ 2019 workload, but would be surprised if he gets much more.

27. Kahale Warring – This ones in honor of my co-host on the Razzball Fantasy Football Podcast, B_Don. He’s been shouting praise for Warring with a craze look in his eye ever since the Texans drafted him in the 3rd round of the 2019 draft. He’s big, athletic and he looks great without a shirt on:

He’ll have to jump Fells and Akins on the depth chart, but those guys aren’t the most intimidating competition either. There’s an outside chance for Warring to skyrocket to TE1 territory if things break right for him in 2020.

mike evans or CEH in a dynasty?

CEH by a good bit for me