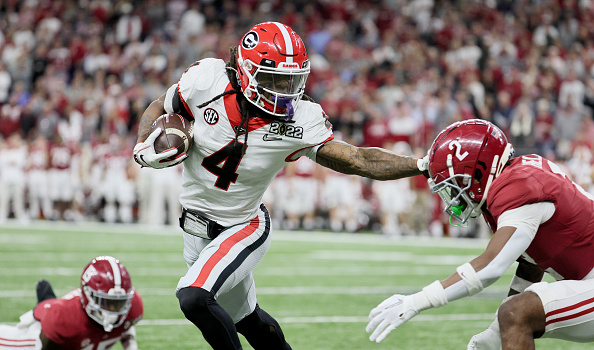 I continue my review of the updated Dynasty Rookie Draft Rankings with players 11-30. You may find some managers begin to check out when you reach this stage of your draft, so this is an opportunity to gain a leg up on your competition. 2022 was a deep draft class and 2022 contributors can be found throughout this group.  Let’s take a deeper look.

You can find writes ups on my top 10 dynasty rookie draft ranking for 2022 fantasy football here.

11. Wan’Dale Robinson | WR | Giants – 2nd in the SEC in receiving yards and receptions in 2021. I watched a lot of film on this guy and he’s a hold-your-breath kind of player.

12. John Metchie  | WR | Texans – Uber-talented Alabama receiver who is coming back from an injury. Could be a starter by mid-season.

13. George Pickens | WR | Steelers – Has the attributes of a WR1. He will have to battle for targets with Diontae Johnson, Chase Claypool, Pat Freiermuth, Najee Harris, and fellow rookie Calvin Austin III. It’s also fair to question the ability of the Quarterback position in Pittsburgh. I’m betting on this high-upside pass-catcher who is a much better blocker than many realize.

14. Trey McBride | TE | Cardinals – Criminally under-valued on most lists. McBride is the best TE in this class by quite a wide margin. Don’t be scared off by current Cardinals starter Zach Ertz. Ertz is a 9 year NFL veteran with an injury chart that would make John Dalton (Road House) blush.

15. Rachaad White | RB | Buccaneers – Big back with solid receiving skills. He battled through a stop at Junior College and a tough season at Arizona State. White will have to wait behind Leonard Fournette in 2022. I bet the former Sun Devil will be a big part of the post-Brady Buccaneer offense.

16. Skyy Moore | WR | Chiefs – Sturdy receiver with good speed and excellent after-the-catch ability. Is he the next Tyreek Hill? If I thought so, I would not have ranked him 16.

17. Alec Pierce | WR | Colts – A decent chance to see the 2nd most targets on his team in 2022. Matt Ryan played hurt for much of the season in 2021. If the Colts’ offensive line can keep Ryan healthy, Matty Ice can provide solid production for two pass-catchers.

18. Zamir White | RB | Raiders – When your nickname is “Zeus” you better bring the thunder and Zamir White does just that.  He’s a power-back who grinds defenses down by refusing to be tackled on first contact. Zamir breaks his longer runs after bullying defenders for a few drives. Current starter Josh Jacobs is in the final year of his contract. Look for this former Georgia Bulldog to chew on AFC West defenders full time in 2023.

19. Dameon Pierce | RB | Texans – Never took over as the true bell-cow back in Florida, but his statistics scream RB1. He will have to battle with Rex Burkhead and Marlon Mack to earn carries in 2022. I expect Dameon to be part of a time-share by season’s end, maybe more.

20. James Cook | RB | Bills – Love the receiving skills and he landed in a perfect spot in Buffalo. The Bills don’t really need to run the ball. I like current starter Devin Singletary and I wouldn’t be surprised is Singletary fends Cook off for longer than many expect. But Dalvin’s little brother offers breakaway speed upside that Singletary cannot match. Don’t expect many rush attempts, but Cook will be feeding your fantasy squad with receiving stats by the season’s end.

21. Tyler Badie | RB | Ravens – One of my favorites. The best back in the SEC last season. He lands on a team with two RBs returning from injury. Rave reviews at OTAs. Get on the hype train before it takes off.

22. Tyler Algeier | RB | Falcons – I’m a sucker for a former walk-on who not only becomes a starter but plays well and is eventually drafted. Current starter Cordarelle Patterson is an amazing athlete, but also 31 years old.

23. Isaiah Spiller | RB | Chargers – I like the talent but don’t like the spot. Austin Ekeler is the unquestioned lead back on the Bolts. Spiller is a bigger back who can absorb some of Austin’s light work. Could be very good if AE were to miss time.

24. Tyrion Davis-Price | RB | 49ers – Balanced back who runs with a low center of gravity. Davis-Price offers a little different look than the speedster Elijah Mitchell. San Fran grinds through backs. Don’t be surprised when this powerful and elusive runner does something with his opportunity.

25. Tyquan Thorton | WR | Patriots – Blazing speed with awesome upside. Thorton will have to pry targets away veteran receivers DeVante Parker, Kendrick Bourne, Jakobi Meyers, and Nelson Agholor. With his incendiary quicks, Tyquan could eventually leap to the top of this depth chart. I’d expect him to rank at least 3rd by the season’s end.

26. Pierre Strong Jr. | RB | Patriots – Have the Patriots become the Raiders? Two speedsters on offense in their 2022 draft class. Pierre Strong Jr. is a burner back that offers a different look than bully backs Rhamondre Stevenson and Damien Harris. The latter is a free agent after this season. If Strong can prove his mettle in 2022 he could form a solid committee in 2023.

27. Justyn Ross | WR | Chiefs – Top 50 recruit out of high school. Became the best receiver at Clemson in 2018 and 2019. Learned in 2020 that he has a congenital condition in his spine called Klippel-Fleil Syndrome which can cause vertebrae to fuse together. Ross had corrective surgery in 2020 and came back in 2021 with a limited role. As a former stud receiver with Patrick Mahomes at QB Ross has immense upside, but the downside is he doesn’t play at all.

28. Jalen Tolbert | WR | Cowboys – CeeDee Lamb and Michael Gallup are the clear WR1 and WR2 in Dallas, but Tolbert need only beat Noah Brown and James Washington (among others) to take the WR3 spot. That would put Tolbert one step away from being a starter with a quality QB.

29. Romeo Doubs | WR | Packers – A big dude who is looking to help fill an enormous gap left by DaVonte Adams’ departure. My take is Allen Lazard and Christian Watson are ahead of Doubs on the preliminary depth chart, but I don’t have a great degree of certainty. Doubs is a good lottery ticket here.

30. Greg Dulcich | TE | Broncos – The former Bruin is not much a blocker, but he is a quality pass-catcher, and he’s great after the catch. Targets are up for grabs in Denver and I think Russell Wilson will like throwing to this guy.

Nice rankings, I enjoy seeing other in-sites! The only player we differ on ( for this year) I think I’d have G.Pickens at #9 ahead of Watson & Bell. But otherwise, we’re thinking the same! Now if this was the top rookie dynasty rankings 3 years from now…..Jamison Williams, G.Wilson, D.London, B.Hall, and Zeus are my top 5!! Don’t you wish we had a crystal ball?? Fantasy would be easy!! Lol

Hi Derek,
Thank you for reading. I have an update to this list coming out soon and you will find that we close on Pickens.
I like your future top 5. I’d have WanDale in my group.
Thanks again.