Hello again to all the IDP degenerates out there! Like it or not, you have stumbled onto the third and final set of position rankings for the 2021 season: Defensive Backs. If you missed the first two articles, make sure to check out the rankings for Linebackers and Defensive Line/EDGE.

These DB rankings will include both safeties and cornerbacks, but you’ll notice the list is overwhelmingly safety-heavy. Corners provide a rare instance in which being a great real-life player does not translate to fantasy production. If the defense boasts a shut-down corner, offenses are less likely to throw his way, meaning fewer opportunities for tackles, pass break-ups, or interceptions, aka fantasy points. Even those corners who are targeted are often inconsistent fantasy producers on a week to week basis, since much of their production depends on where the opposing quarterback chooses to throw the ball. Safeties, however, generally provide much more consistency on the stat sheet, and are therefore more reliable assets for your IDP lineups. Like linebackers, look for safeties who are 3-down players, and preferably those who spend a lot of time in the box assisting in run support. More time in the box means the player is closer to the action, and therefore more likely to achieve tackle numbers that a deep safety will not.

As always, it is important to know your league’s lineup requirements and scoring settings before you draft. Some leagues split defensive backs into cornerbacks and safeties, requiring the you start one or more of each. Other leagues may lump them together, but give cornerback stats an added boost to bring their value closer to safeties. These leagues are far from the most common, but still worth mentioning before getting into the rankings. Now that we’re all up to speed, let’s dig in! 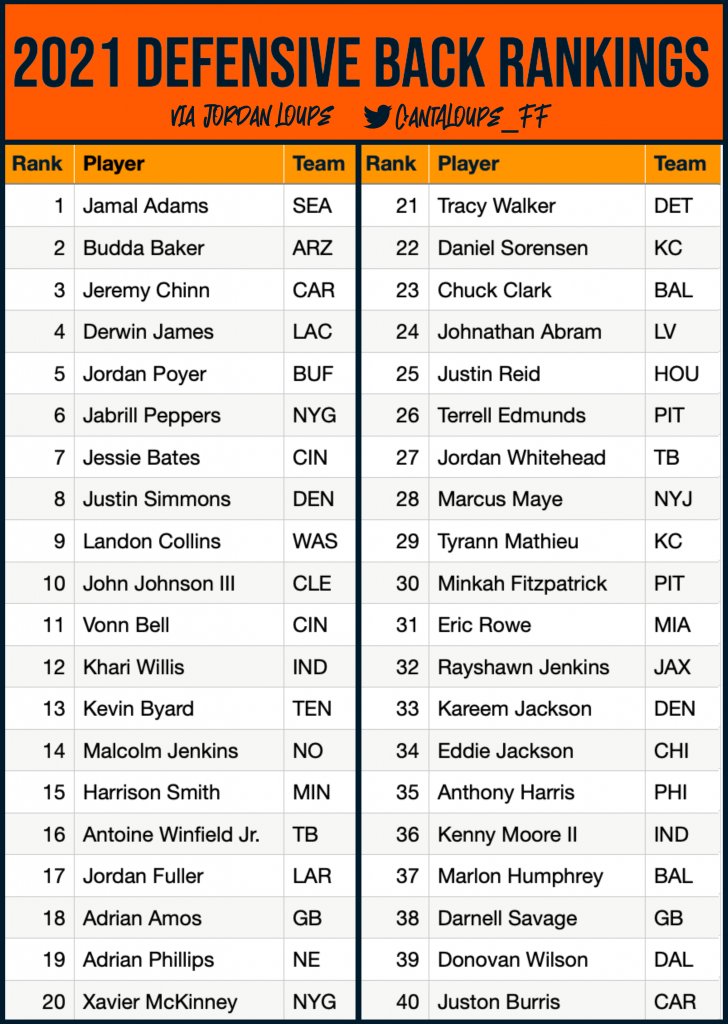 COVID-19 may have been the primary focus in 2020, causing a multitude of players to miss game action, but that doesn’t mean that your regular, run-of-the-mill injuries went away. On the offensive side of the ball, we saw major injuries to star players like Christian McCaffrey, Saquon Barkley, and Dak Prescott, to name a few, but we also spent the majority of last season without two defensive backs who crack the top 10 in the rankings above.

Landon Collins has been regarded as one of the top safeties in the league for both real-life and fantasy since the New York Giants selected former All-American in the 2nd Round of the 2015 Draft (not to take sides in the whole “Defensive Back University” debate, but six of the top 40 are Crimson Tide alums). Collins spent four highly productive seasons in New York, averaging 109 tackles per year during that span, by far the most on the team. He had no fewer than 96 stops during any given season from 2015-2018, something that no other safety in the league was able to achieve. With that consistent level of play, Collins was an immensely coveted player when he hit the free agent market in the 2019 off-season.

The Giants’ front office would not match the offer Collins received from their NFC East rival, and they watched Collins sign with Washington on a six-year, $84 million deal. Year one in our nation’s capital saw the same level of production that we had come to expect from the former All-Pro, as Collins posted 117 combined tackles, which ranked third in the league among defensive backs. The 2020 season started much the same way, as the Washington defender tallied 37 combined tackles over the first six weeks, a pace of 99 tackles over a full 16 games. Unfortunately, Collins wouldn’t make it out of Week 7 unscathed, tearing his achilles in the second quarter vs. Dallas.

With Collins lost for the year, Kamren Curl, a rookie 7th Rounder from Arkansas, was thrust into the starting lineup, and he exceeded all expectations. He became an every-down player for the Football Team as their defense led Washington to the NFC East crown. Curl had 7 or more tackles in 8 of the 9 games that he started, playing less than 95% of snaps only once over that time frame.

Curl’s phenomenal play left Collins’ 2021 role in question, at least to the fans and media. Some were calling for Collins to be moved to linebacker to allow Curl to remain at strong safety, while the hottest of takes speculated that Collins could even be a surprise cut. The coaching staff, however, has not shared those sentiments. Defensive Coordinator Jack Del Rio has been adamant this off-season that Collins would remain at strong safety, and there has been nothing in training camp to prove otherwise. The linebacker room was bolstered with the addition of Jamin Davis, so there’s really no place for Collins there anyway. The real question is who the second safety will be. Will Curl move over to free safety and play alongside Collins? It’s possible, but there is competition from free agent acquisition Bobby McCain, fresh off a season as the starting free safety for the Dolphins . Early reports state that both players have gotten reps with the first team, so this is a competition to watch. Collins, however, appears fully recovered, and should be in line for 100+ tackles once again.

In 2018, the then San Diego Chargers selected a versatile safety from Florida State, who surprisingly fell to pick 17 overall. Projected as a top 10 pick, Derwin James entered his rookie year with a bit of a chip on his shoulder. The former Seminole quickly proved to be one of the steals of the draft, as he posted 105 combined tackles, 3.5 sacks, and three interceptions while starting all 16 games in his first season. James would be recognized as a First Team All-Pro, on top of making his first trip to the Pro Bowl. With so much success so early on, the future looked extremely bright.

James would not have the sophomore season that Chargers fans and IDP players were hoping for. He began the season on injured reserve after suffering a stress fracture in his foot that required surgery. The first three months of the season came and went before James finally made his 2019 debut in December, when he proved just as dynamic as ever. In the final five games of the season, James never dropped below 98% of the Chargers’ defensive snaps, while averaging seven tackles per game. Sadly, James hasn’t played in a regular season game since, as a torn meniscus forced him to miss the entire 2020 season.

So, why am I so high on a player who has only played 5 games over the past two seasons? Well, it has a lot to do with how much trust new head coach Brandon Staley has already placed in him. Not only will he be a full-time safety capable of playing all over the formation, but he’ll now have the responsibility of wearing the green dot for the defense.

#Chargers HC Brandon Staley on giving Derwin James the green dot: “I think he’s rare, really everywhere, but he’s a rare leader. People really respond to him – players, coaches, everybody. There’s nobody else that I would want talking to our defense than him.”

The green dot is placed on the helmet of the single player who can communicate with the coach via headset, who then relays that message to the rest of the team. In essence, this is the leader of his unit. On offense, this player is the quarterback, while on defense it’s typically a linebacker, though it isn’t unheard of for a safety to wear the dot. In fact, during Staley’s stint as defensive coordinator for the Rams, he gave that designation to safety John Johnson III, en route to the number one defense in the league. Such an improvement may be a bit of a stretch for the Chargers’ D in year one of the Staley regime, but a health Derwin James will go a long way towards righting the ship.

Thanks for reading, and keep your eyes peeled for my combined/overall IDP rankings, dropping soon. As always you can find me on Twitter @CantALoupe_FF. I hope you see you there!

What’s your feeling on drafting the “2nd” cornerback on a team? For example, opponents know that CB1 is an all-pro and stops everything in their path, so they target their second WR, thus giving CB2 a ton of tackles and work. Is that a valid methodology?

I think you have to target the rookies. It looks like New Orleans is starting a first round rookie at CB2. Dallas also has a rookie that should see playing time early, but they have three corners. In my two corners starting League, I grabbed Patrick Peterson out of Minnesota, because Jeff Gladney just got kicked out and they didn’t want to have to start the old man. Kind of a reverse rookie thing.

Yeah, love that approach! I’m from the great north, and Zimmer has a tendency of running old cornerbacks/safeties around the field a ton, so plenty of opportunity for old men to rack up the tackles.

If he’s playing opposite a true shut down corner then yes. Has to be someone that offenses are actively trying to avoid, which increases targets towards the CB2. For example, I’m not likely to play Jalen Ramsey in a typical league, but I would consider Darious Williams in a good matchup when I expect the opposing team to be throwing a lot.