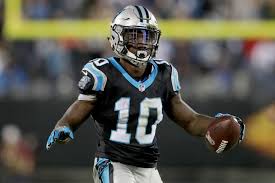 Are you playing in three wide receiver leagues? If you aren’t, what’s wrong with you? Do you not like fantasy points? You must be a fan of the Big Ten style fantasy leagues and grinding out those low scoring victories. I can respect it. I like 3WR formats and if you do too, today is your day for WR rankings! Just like my age, let’s go to the 30’s and beyond.

The end of July is near and that means the end of Rudy Gamble’s special pricing for NFL Roto Deluxe tools is almost here. Get the best value in the industry today!

Allen Robinson ranked 20th in snap share last season and 34th in targets, but it translated in a dud of a season. What’s the deal, Mr. Robinson? Does Jesus only love Mrs. Robinson? Maybe Robinson can graduate into the elite wide receiver conversation but last season didn’t help his case. Robinson had one game with double digit catches and one game with 100 yards. I expect Anthony Miller to emerge so things don’t look to promising here.

Robby Anderson’s success hinges on the success of Sam Darnold. Anderson’s 39.3% red zone target share, which ranked 8th in the league, led to 11 red zone targets. Robby is Darnold’s guy so we will see if their late season success with each other translates into 2019.

Dede Westbrook led the Jaguars in every important receiving category last year. The Jaguars haven’t really added anyone of significance to the wide receiver room this offseason so I expect more of the same. This could be a big season for Dede, who has already shown a lot of promise in his young career.

Mike’s 63% snap percentage should go up by quite a bit with the departure of Tyrell Williams and slide him into a prime role with Los Angeles. I worry about the injury history and Austin Ekeler and Hunter Henry soaking up a lot of non-Keenan Allen targets so I am a little bit lower than the consensus on my Mike Williams ranking.

Geranimo claims that he will be claiming the slot receiver role for Green Bay and that is a valuable position in an Aaron Rodgers offense. This gives him a slight rankings advantage over MVS for the time being.

Golden Tate will always have some sort of value in PPR. Outside of the 20 yard line, he finds a way to get the ball in his hands but the lack of red zone usage for a guy like Tate is a big concern for me drafting him. Plus, there is the whole Eli Manning is his quarterback thing.

Update: Shephard fractured his thumb. He could be ready for the regular season. Sterling Shephard ended 2018 with a bang without Odell Beckham Jr. on the field and after Beckham was traded, it looked like Sterling would at least get a shot to be Eli Manning’s main squeeze. That is, until Golden Tate came to town. Shephard ended the season as WR27 in PPR last season and it’s hard for me to rank him that high considering the offense that he plays in. He just won’t be on my draft board this season.

Marvin Jones only played in 9 games last season, but he was on pace to fall just short of a 1,000 yard season. I’m not sure how much I desire the 2nd wide receiver on a team that’s going to run the ball a lot, but there is consistency and safety here with this pick.

I am getting Curtis Samuel everywhere as my WR4, especially in best balls. This ranking does not do justice to the potential ranking that he could be at by the end of the season. The snap count will drastically rise this season but my only concern will be the target share. Christian McCaffery and D.J. Moore will soak up a lot of attention from Cam Newton in the passing game.

Anthony Miller is coming off of a shoulder injury that he ended up playing through and he should be healthy going into his 2nd year campaign. His 7 touchdowns and 7 red zone receptions were both good for top 30 among wide receivers. I think Miller is going to be a big factor for the Bears as Mitch Trubisky continues to grow as a quarterback. The only downfall that I see with Anthony is his snap share split with Taylor Gabriel.

Randall Cobb and Jason Witten being a part of this offense is pretty inconsequential to the development to Michael Gallup as a fantasy asset. Gallup will be the true WR2 in this offense and should see an increase in target share from his rookies season. Gallup’s downfall very well might be average QB play from Dak Prescott. But there is a lot of big play potential here.

I suppose that a Corey Davis break out season could be on the horizon, but you aren’t likely to talk me into drafting him. I think that the arrival of Adam Humphries could cypher some targets away from Davis and this passing game is pretty anemic in the first place. How anemic? Corey Davis saw 36% of the red zone targets last season for the Titans and can anyone guess how many targets that came out to? 9. 9 targets. That’s it.

I like Daesean Hamilton a lot but I don’t think that I can rank him over Courtland Sutton just yet. Sutton didn’t do much for the Broncos after Emmanuel Sanders got hurt, but with Sanders will struggle with that Achilles this season, I don’t care what anybody tells you. There should be opportunities for Sutton to produce.

Jackson is exactly where he wants to be and that is awesome for him. Unfortunately, he is aging and I don’t see him being much more effective than he was in Tampa Bay, and he wasn’t very effective in Tampa Bay. He did have some spike games and that will make him valuable in best ball formats, but there will be a lot of competition for targets.

If Ryan Fitzpatrick ends up winning the starting job, this will be too low of a ranking for Albert Wilson. But, the result of the QB competition in Miami remains to be seen, so we sit and wait.