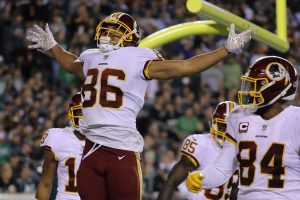 The tight end (TE) position is an odd one for fantasy purposes. Every year there are a handful of monsters that are true weekly difference makers, but after that, the position is mostly the same. In 2018, 63.1 fantasy points separated TE4 from TE6 while TE6 and TE41 had about 63.1 points between them. Similarly in 2017, TE1 and TE5 were separated by 48.7 points which was the same margin between TE5 and TE22. So, if you miss out on the top talent, it’s worth waiting for  an extremely cheap option that has the upside of entering the elite group.

One way to identify values is to target efficient performers that are in line for increased use. Using that strategy, I reviewed the top 12 TEs in Hog Rate (HR) which is a players targets/snap played. The graph below shows 2018 HR with the top 12 highlighted vs. snaps played at the TE position: 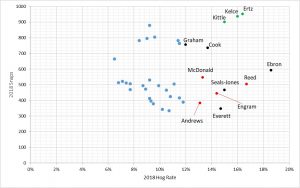 This trio is head and shoulders above any other player at the position in terms of both HR and snaps played. I am comfortable simply lumping them together because they are the class of the position and you cant go wrong with any of them. Without spending too much time on the obvious, is remarkable just how far removed they are from the crowd.

Engram had the 8th highest HR when on the field for New York last season, however injuries limited him to only 475 snaps. As a full time player in 2017 he saw a 15.5% HR on 777 snaps despite only starting 11 games.  He enters 2019 in a suspect offensive environment, however he is also one of the team’s most explosive weapons and has a history of heavy usage. An ADP of TE5 is appropriate, and while I wouldn’t go so far as to say he’s a value, it is possible the pass game will run through Engram. Given usage patterns and lack of competition, he may be a safer choice than it seems.

This former Rice Owl has always been a physical specimen with an 87th percentile speed score, but had never been able to get enough playing time to make it count. In 2018 McDonald finally put it all together with a TE10 finish on 547 snaps. The Steelers let Jesse James walk this offseason so more snaps should be available to McDonald at the TE position. The aptly named Xavier Grimble should fill in some of James’ rugged blocking duties, but Vance stands to inherit an expanded role. Razzball projection expert Rudy Gamble agrees, giving him approximately 150 additional snaps than he saw a year ago. Old McDonald’s HR could also see a bump with the Steelers breaking in a number of fresh faces at wideout. I like the ADP and the upside here, he’s an interesting buy at a generally uninteresting position.

Goodness gracious, would you look at that HOG RATE!? Reed clocked in with the second highest HR in 2018, it was just an incredibly inefficient season. His catch rate on those targets was a career worst 64.3%, and of course he was once again limited by various injuries. When he’s on the field, Reed is the kind of dominant receiving TE rarely seen in the NFL. Of course, the elephant in the room is health, and I don’t blame anyone for being sheepish there. However, he’s currently feeling good and at a position so devoid of high volume players it is worth the gamble to stick him on the end of your bench. If it goes south, you’ll be no worse for the wear and can cut him for that week’s hot waiver pickup. It is simply fantasy malpractice not to kick the tires on a target monster like Reed.

The Andrews hype has reached a peak with many beat reporters saying he was the most impressive player during camp. When on the field last year as a rookie he was highly targeted and quietly put together a very impressive debut. His efficiency was off the charts for a rookie, ranking 2nd at the position in yards per target and 4th in fantasy points per target. Andrews only saw 383 snaps but still managed to bag the 22nd most receiving yards by a rookie TE in NFL history. Should he see the bump in snaps he deserves, Andrews could be in line for a massive 2nd year leap. I’d go so far as to say he has the best chance to be this year’s George Kittle.

Don’t Get Your Hopes Up

The 2018 Ebron was what the Lions envisioned when they spent a top 10 pick on him way back in 2014. Shockingly, he is still only 26 entering 2019 and once again in what should be an excellent offense. The Colts added Parris Campbell in the draft but otherwise return a similar pass catching corps from a year ago and while another 18.6% HR is unlikely, Ebron should continue to be heavily targeted when on the field. The issue is that his snap share will likely stay the same. His role as essentially a “big slot” receiver will stay intact, but there isn’t much room for growth and a natural regression in TDs is also likely. Ebron’s ADP is about on point but due to touchdown regression his weekly floor is concerning.

Coming off his best season at age 32 as the Raiders leading receiver, Cook signed in what appears to be an ideal landing spot in New Orleans. While the QB upgrade is obvious, my biggest concern is not a lower snap total but a potential decline in HR. The Saints offense has not been kind to TEs not named “Jimmy Graham” in the Drew Brees era. Cook has, at the very least, 2 players ahead of him in the pecking order and Brees has now seen a 3 year decline in pass attempts as the offense adjusts to a 40 year old QB. At an ADP of TE8, Cook is priced at his ceiling, leaving little room for profit.

Oh, how the mighty have fallen. The once dominant Graham makes the list by having the 12th highest HR in 2018, but not much to show for it. The original JimmyG will turn 33 this season and is showing definite signs of falling off the proverbial cliff. After drafting a their TE of the future, the Packers may reduce Graham’s snaps this year both to keep him fresh and to work in the new guy. There’s just not much here anymore.

Ill take “names you didn’t expect” for $100, Alex! Everett actually posted the 7th highest HR for a TE in 2018, however he also had the 3rd lowest snaps played of all TEs charted. With Tyler Higbee running as a starter this summer, it would be foolish to think Everett sees any kind of bump in playing time. He can remain an oddity on this list.

Might as well run it back with “names you didn’t expect” for $500. The converted WR had the same HR as George Kittle last year, but he played about half the snaps. His 2018 usage is promising, but there is no way to know what his role will be this year in a completely overhauled Arizona offense. It’s worth mentioning that Kliff Kingsbury does have one season in which he featured a TE (Jace Amaro, 2013), but I can’t advocate drafting RSJ outside of very deep dynasty type setups. I will recommend keeping this name filed away in if we learn he will have a meaningful presence on the field.