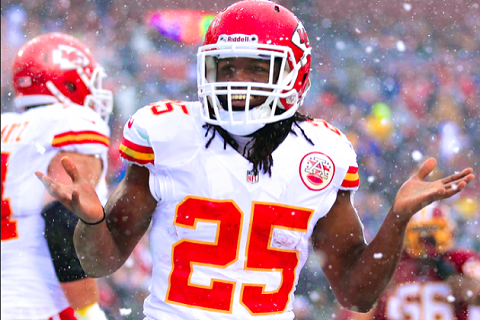 Well, you should remember, as it was only last week where 97% of the all ACL’s in the NFL collectively exploded. I’m no doctor, so I had no idea that modern medicine was able to take an athlete, who was expected to be out 5-8 weeks, to practicing a few days after his injury, and might actually be playing in today’s game. I’m obviously talking about Jamaal Charles, but he’s not the only one who was affected by this dark wizardry insta-heal. In fact, the only player that seems to have been left out from this wonderful era in medicine appears to be Ryan Mathews.

Week 3 Rankings have been updated for today’s games. You can check them out here.

Well, normally I preface these tweets with a warning to take them with a grain of salt, and maybe some pepper if you’re feeling festive, only because these things usually aren’t confirmed, as I think Adam Schefter is running at a 25% tweet success rate. Always double-check these things before game time. But, I have to say, I feel pretty confident here, as not only is Cecil Shorts the source, but he’s also giving fantasy advice. I figure Shorts is a good enough reference here to buy-in.

Again, we should probably be starting A.J. Green here, as Geoff Hobson look like he escaped some kind of ninja attack to bring us this news. While I don’t think Green will be at 100%, I’d gather that he’s still better than whatever’s on your bench.

Welp, here we go again. At this point, expect to start both Alshon Jeffery and Brandon Marshall, but do keep yourself tuned to any updates.

This obviously, is not about Asante Cleveland, so don’t go rushing to Google to find out who he is. With Vernon Davis‘ status still up in the air at the time of this posting, this news can’t be taken as a good sign. Especially for Josh Johnson.

UPDATE: It appears medical science took a step back and flipped a bird at my lede, as Jamaal Charles looks to not be starting in today’s game.

In another development, and probably the least surprising news of the year, Arian Foster will likely be out today due to a hamstring issue. Alfred Blue looks to be the guy today, and Ronnie Brown (surprise! Still alive…) might get some action as well.

Maurice Jones-Drew won’t be available for today’s game, so once again Darren McFadden and Latavius Murray will lead the Raiders to a historic loss today. Historic, at least, since last Thursday.

Bernard Pierce is a “serious doubt” to start today for a thigh injury. Fitzgerald Toussaint (+5 name creativity) was signed off the practice squad, but expect Justin Forsett and Lorenzo Taliaferro to carry the load.

DeSean Jackson is a good, as it Jordan Cameron.

Chargers vs. Bills – The Bills are still in first place, so I’m iffy as to when the world will end. I think it depends on the Browns game probably.

Cowboys vs. Rams – I can’t wait to see Austin Davis, said no one ever.

Washington Football Team vs. Eagles – The KC1 era has begun.

Texans vs. Giants – After this game, he won’t be known as Fitzpatrick, rather he’ll be known as FitzMAGIC. Yes, you actually have to yell that ‘magic’ part, thus the reason why I capitalized it.

Vikings vs. Saints – If the Saints hadn’t started out 0-2, I would have expected them to top what Atlanta did on Thursday by a large margin. As of now, around the 56 point area seems more probable.

Titans vs. Bengals – Hey, remember that one week when Jake Locker was a sleeper pick? Yeah, I think he’s still napping.

Packers vs. Lions – I’m taking the over and multiplying it by two.

Colts vs. Jaguars – I’m if you have to watch this game.

Raiders vs. Patriots – I know that the -14 spread is pretty air tight, but just something about this game feels like a trap.