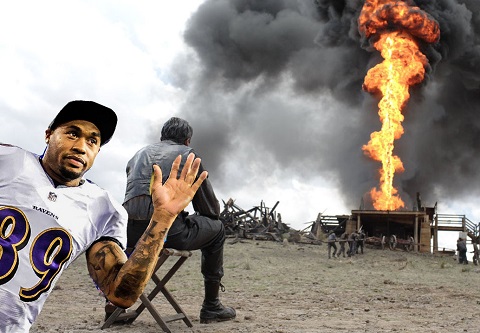 “I want to make sure that whatever team I go to, they’re going to get the best, in-shape 35-year-old guy they can get. If that happens to run through Bank of America Stadium, put your goggles on cause there’s going to be blood and guts everywhere.” — Steve Smith, Charlotte radio station WFNZ-AM.

Soooo, that was graphic. And as if someone in the NFL head office was listening to him, even without the benefit of it being on video tape, it appears we’ll get to see Steve Smith’s best Duke Nukem impersonation this Sunday, as the scheduling gods have sent the Carolina Panthers to Baltimore’s Inner Harbor (the shining two-by-two square mile gem of the area, or what I call the “safe-zone”. Haha, just kidding, it’s not that safe) to do mortal football combat with Smith and the rest of the Ravens. And probably Joe Flacco’s elite eyebrows. Those things have a license to kill. And, you know, check down.

Week 4 Rankings have been updated for today’s games. You can check them out here.

That news gives me the Alfred Blues. Don’t worry, I’ll show myself out. Is Alfred Blue droppable? I guess? Let’s see what happens later today. And don’t forget, it’s not like Arian Foster is some kind of bastion of health, so even if you’re more of a jazz guy, doesn’t hurt to hold here if you have the roster space.

Doug Martin will get the “bulk of the carries” in Sunday’s game against the Steelers. Or so ESPN is reporting. It’s easy to forget (since I struggled to stay conscious during the second half) the egg that the Bucs laid the other week when they lost by a mere 89 points… but just as a refresher, Bobby Rainey lost two fumbles and looked bad doing it. While I assumed it was going to be the dreaded RBBC at this point and time, it appears that all distribution will go to Martin, at least for this game.

In other news that doesn’t really concern today’s footballness (it’s a word, I swear), Knowshon Moreno is expected to return to action in Week 6, which would be less than a month after he dislocated his elbow. I doubt I could stop crying in that amount of time if it happened to me, so kudos to him. Not so many kudos going to the Lamar Miller owners though, that’s for sure.

Also, it’s being reported that a trial is unlikely to start before the season ends for Adrian Peterson.

Logistics diminish the chances Peterson will play for Minnesota again this season. He has a constitutional right to a speedy trial, but there are mitigating circumstances. …Still, (Attorney William Lee) Hon said felony indictments in his county take three months to a year to resolve whether the case is plea bargained or goes to trial.

A plea deal is apparently his only chance to quickly return to the roster, but this new report dampens the chances of that happening. Still, if you have the roster spot, I’d hold until October 8th, and then it’s probably safe to drop him after that point.

UPDATE: Charlie Whitehurst is expected to start in place of the injured Jake Locker. Both Calvin Johnson and Brandon Marshall are expected to play today, and Vernon Davis is good to go for today’s afternoon game.