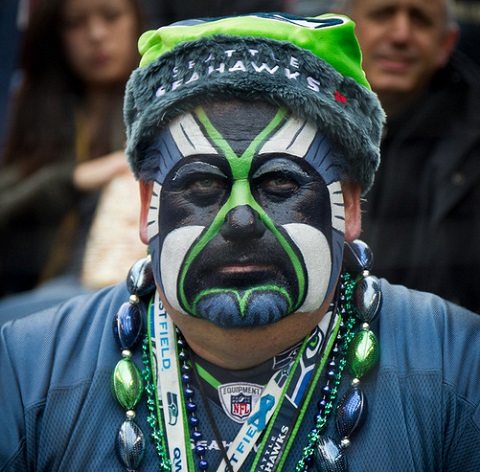 While I would have normally highlighted other potentially entertaining match-ups like the Bengals vs. Colts or the Panthers vs. Packers, or maybe even the Browns vs. Jaguars (HAHA, just kidding) in the lede, the Percy Harvin trade heard around the world is still fresh on our minds, still pungent from the smell of crazy. Reports (the Seattle PR machine was revved up and ready to go apparently) have already surfaced about how disgruntled Harvin was, including mentions of past conflicts with Russell Wilson and getting into fistacuffs with Golden Tate. (But when it comes to punching Golden Tate, my question is: who wouldn’t?) Despite all the headlines, the game still looks to be a safe win, as there usually isn’t anything to fear from an 1-4 team that’s being led by one best quarterbacks in the NFL when measuring profound mediocrity. However, Harvin is one less offensive weapon the Seahawks will have coming off a fascinating loss to the Cowboys, and if Seattle finds some way to lose this one, the potential schadenfreude would be orgasmic. It should be noted, while I would consider the chances of losing to the hapless Rams about the same as Olivia Wilde touching my bathing suit areas, that St. Louis has historically done well against Seattle when at home, and generally played pretty well against the 49ers last week. It’s enough to where I’m still getting my popcorn (and alcoholic beverages) ready for this one.

Week 7 Rankings have been updated for today’s games for all your roster needs. You can check them out here.

Jimmy Graham traveled with the team to Detroit, just in case you wanted to know his travel plans. Stalker. Update: “Saints TE Jimmy Graham is expected to play, though not expected to start due to shoulder injury. Will test injury in pregame.”

Calvin Johnson is testing his ankle at this moment and will be a game time decision.

Kelvin Benjamin looks like a start, and wow, that’s about it for possible roster changes at this point in time.

That’s it? Three players to talk about? What’s next? Stigmata?