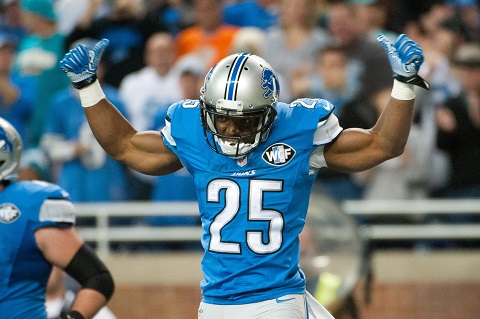 Most would have undoubtedly considered the lineup I am about to throw at you to be ridiculous had I recommended it last week for last week’s matchups. I am certain my readership would have plummeted from fifteen to about five. Even though that’s an eighty percent decrease can I still use the word “plummet” considering how small the numbers are with which we are working? There are more than fifteen people in any of the men’s rooms at any given time at an NFL stadium during a game. Are those my followers? Are you sh!tting me? I love it! While most would have quickly clicked “unsubscribe to malamoney’s posts”, when they read the papers on Monday morning and saw the results, I’m not sure if they would have called me lucky, and lucky idiot, or just an idiot. Probably all three, which is technically the second option. Led by Alex Smith and Theo Riddick, the following lineup would have won just about any matchup in its path…

Alex Smith – Alex Smith is probably the most boring quarterback in fantasy football. The only thing more boring is his name. It might as well be Alex Boring. That would actually be less boring. Smith threw for 363 yards and two touchdowns. He even ran one in, totaling just over 29 points. How’s that for boring. Agent Smith is going to have some fantasy value this year as a matchup-based QB. Last year he was a top fifteen QB and I think he has a solid chance of repeating in 2016. A few more games like this and he’ll be pushing for top ten.

Theo Riddick – It didn’t take long for Riddick to confirm the fact that he’s going to play a reasonable role in the Lions offense and that he’s going to be a solid play in PPR leagues. On seven carries he tallied 45 yards and a touchdown. He also caught all five targets for 63 yards and another touchdown. Riddick is declaring himself a double threat, air and ground, and it’s just week one. He should be owned in every PPR league. However, I am taking Ameer Abdullah first.

Jalen Richard – When I first read this guy’s name I was certain he played basketball. I’m still not convinced otherwise. Even though he rushed for 84 yards and a score, I have no interest in him. Not unless his name is Latavius Murray or DeAndre Washington. Besides, if you take aways Jalen’s 75-yard touchdown run, his line would be two carries for nine yards. I’ll pass, but I’ll definitely be targeting him in my fantasy basketball draft.

Will Fuller – You roster will be fuller if you add Will Fuller. I guess that’s a true statement no matter who you add, but at least with Fuller you’d have yourself a solid bench player. If you guessed that DeAndre Hopkins was the Texans top receiver on Sunday you would have been wrong. That honor goes to Fuller, who led the team with 11 targets, catching five for 107 yards and a TD. Hopkins caught five for 54 and a score. Fuller was just under fifty percent owned, but that will not be the case next week.

Mohamed Sanu – I’d take five catches for 80 yards and a touchdown every week from my WR2. I think Sanu is going to get a lot of looks with Julio Jones‘ double team draws. Like Fuller, Mohamed is another guy I wouldn’t mind having on my bench.

Nelson Agholor – I don’t see much fantasy value here. I guess I’m not much of an agholoric. Anyone see what I was trying to do there?

Jack Doyle – His name makes him sound more like an associate of James Bond than a tight end in the NFL. Well, after week 1 every fantasy player now knows who he is. He’s the guy that caught three passes for 35 yards, two of which were end zone grabs. With 17 points he led all tight ends this week, making him the current top TE in fantasy football. Don’t worry, it won’t stay that way for long. Doyle is not even the tight end to own on his own team. That would be Dwayne Allen, who had four receptions for 53 yards and a score. Had they combined their week 1 stats they would have had quite the week. We could have called the hybrid Dwayne Doyle. That sounds better than Jack Allen.

Mike Wallace – Wallace led the Raven in targets with six, catching three for 91 yards and a touchdown dance. Nice numbers, but I’m not buying.

Take a look at the top scoring team in your league this week. I’m going to go out on a limb and say that that number is less than 182.92, which is how many points my aforementioned team scored this past week. Remember it’s about points not names. Starting next week I will not only show you an unlikely waiver wire team that would have kicked ass, but I will attempt to predict the players that will make the cut the following week. It’s easy for me to tell you who already did something, but I thought I’d step out of my comfort zone and test out my crystal ball. Without the benefit of a lot of stats, here are my very raw thoughts for next week.