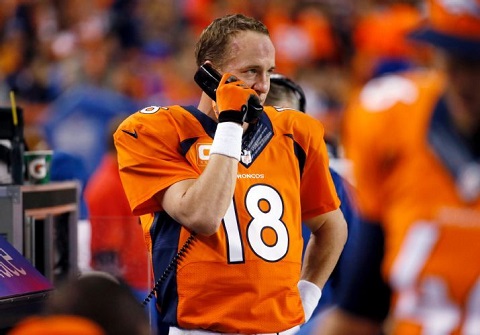 Well, it would be hard for me to analyze this game with an unbiased viewpoint, seeing as how I’m pretty obvious homer. But hey, at least I’m obvious. That being said, I’d have to say that Mike Carey and myself could have probably been best friends. Essentially every decision he called last night was the opposite of what the refs decided, because, let’s be honest here, the officiating was complete sh*t. A crucial special teams fumble by Denver was called back, even though replays clearly showed the ball moving before the player was down, allowing Petyon Manning to drive for a touchdown before the half. In the third quarter, a Philip Rivers interception that was caught on the ground, with movement, was not overturned. A crucial redzone interception by Eric Weddle was called back because of a defensive holding penalty, which, might I add, was way before the 5-yard mark. And then later, a Juwan Thompson touchdown was confirmed, even though he didn’t break the plane… so… whatever. I suppose things like this happen. At the very least, Ronnie Hillman was negated something like 80 fantasy points, and the Broncos seemed more interested in trolling fantasy players than by any other team I’d seen in recent memory. So even though Denver won, I’m pretty sure most of us lost. Including my liver. What can I say? Misery loves company…

Peyton Manning – 25/35, 286 YDS, 3 TD. A few weeks after Manning retires, I swear that head of his is will just swell up and explode all over the place. That helmet has been the only thing keeping it in all these years. In other news, when the Chargers play him next, the strategy should be to hang up some fake Super Bowl posters.

Ronnie Hillman – 20 CAR, 109 YDS and 3 REC, 29 YDS. I just can’t believe that Denver ended up signing another running back named Ronnie Hillman after the first one was just so terrible. Also, I’m pretty sure Montee Ball will never touch the ball again.

Emmanuel Sanders – 9 REC, 120 YDS, 3 TD. My condolences, those of you who are facing off against a team who actually started him.

Keenan Allen – 9 REC, 73 YDS, 1 TD. I’ve been hinting at this for a while. Trust me, I know the Ryan Mathews hill is hard to climb, but I’d like to say all my other Chargers calls were right at least most of the time, some of the times, except for those other times. Exactly.

Antonio Gates – 5 REC, 54 YDS, 2 TD. Antonio Gates is on pace to have the best statistical season of his career. Just wanted to throw that out there.