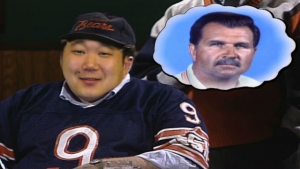 In DA words of DA Coach, “If God had wanted man to play soccer, he wouldn’t have given us arms.”

With those words of inspiration, it’s no wonder DA COACH has done such amazing things. He won the 2018 World Cup without ever stepping on the field or knowing how to play soccer. He once drank the entire city of Chicago out of green beer simply because he wanted to remove all signs of Packer colors from the city. When DA COACH reads fake news, it becomes reality. If you look at DA STACHE directly, some say it has the power to take a piece of your soul. And DA COACH is still, to this day, able to pass the Baltimore Orioles trade physical. DA Coach would rank fantasy football players for us, but it wouldn’t be fair to have all of the rankings in the exact order they will finish the season.

Seeing as I can only dream of reaching DA COACH’s level, here’s my first run at standard scoring fantasy football rankings for the season. You can see other Razzball rankings from Zach and MB‘s rankings. Or if PPR is more your thing, Zach’s and MB’s PPR rankings.