The cultural impact of A Man For Early Seasons: Quarterback, my previous article covering the early season schedules of 2021’s quarterbacks, echoed across not just the fantasy industry, but the Amazon marketplace as well. Currently, The Great Gatsby is the Number One Bestseller in Alternate History Science Fiction. I am honored and want to thank everyone so much for reading and supporting the estate of F. Scott Fitzgerald. I realize my hubris may seem excessive, but why else would a ninety-six-year-old book vault its way up the bestseller list? It’s not like schools are back in session starting next week or anything.

This week we turn our heads away from the quarterbacks and towards running backs. It can be difficult to predict some of these matchups. Simply, just because a team performed well against a position in the past doesn’t necessarily mean they’ll perform just as well against them the following season. A team’s progression does tend to get better or worse over a three-to-four-year window versus a seemingly overnight season to season fix. Therefore, projecting year to year in a small window can be a good indicator. Over the last three seasons, the difference year to year between the team’s production to the running back position is within five points per game roughly eighty percent of the time. In terms of improvement or deterioration to the position, unless drastic changes have been made to either on-field or coaching personnel, the vulnerabilities or strengths do seem to carry over in most of the cases. Below is a chart of each team’s first four weeks of the season, where those opponents ranked in allowing fantasy points to the running back, and the average ranking of those teams. 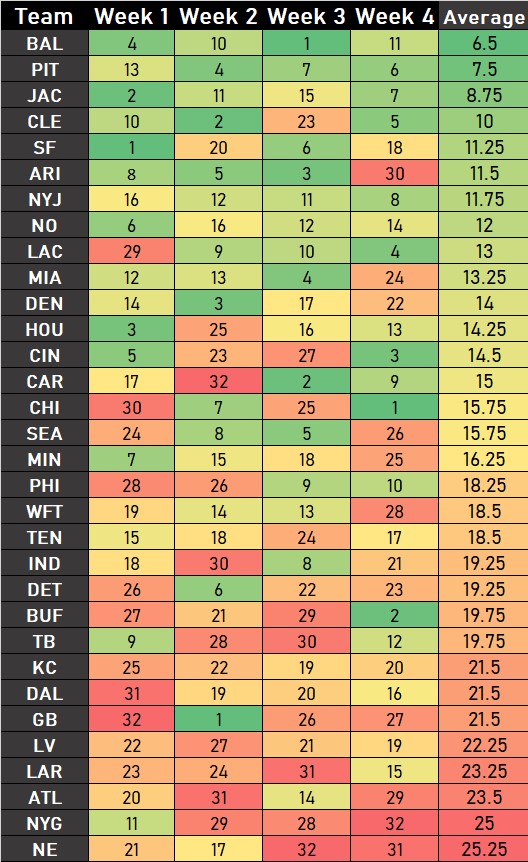 Najee Harris was the first running back taken in the 2021 NFL Draft, so expectations for the 2020 Doak Walker Allen Award winner are going to be understandably high. Harris set University of Alabama career records with 57 total scores, 3,843 rushing yards, and 46 rushing touchdowns. The majority of his work came during his junior and senior seasons as well. The great thing about his landing spot is he will jump right into a starting role on the Steelers with the departure of James Conner to Arizona and his talent being far superior to any of the other backs on the roster. He looks to make an immediate impact as well as three of his first four matchups come against teams giving up the seventh or more points per game to running backs. Harris was also known for his receiving work out of the backfield at Alabama, making him the best dual-threat running back in Pittsburgh since Le’Veon Bell’s glory days four seasons ago. I have Harris ranked as my twelfth best running back and in my top 20 players in points per reception (PPR) redraft leagues.

Nick Chubb only played twelve games in 2020 as he dealt with a midseason MCL injury, but he still managed to finish as the eleventh best running back in PPR leagues with 1217 all-purpose yards and 12 touchdowns. What makes his season even more impressive is Chubb garnered 1067 of those yards on the ground. He is not really known to catch the ball out of the backfield with Cleveland, those duties fall to teammate Kareem Hunt, who also finished as a top twelve running back. Chubb’s opening schedule of games finds opponents averaging over twenty-one points per game to opposing running backs including a Week Two matchup versus the Texans, who allowed over twenty-six points a game. The Week Three matchup versus the Chicago Bears could prove challenging, but the Bears had eight matchups against other top twelve running backs in 2020. In those games, they allowed an average of 101.7 total yards for each of those backs. The other three matchups should be prime for Chubb as those teams give up an average of over twenty-five points per game to running backs. If Chubb returns to a full season, he holds top-five running back potential.

JK Dobbins is a player I have ranked nine spots lower than his current consensus average draft position. I have him ranked 24th at the position and I have company as Rudy Gamble’s Razzball Football Projections has him ranked 23rd at the position. I may be changing my tune though. Gus Edwards signed a new two-year contract extension in June with the Ravens but is already missing the beginning of training camp on the COVID-19 list alongside quarterback Lamar Jackson. The two backs were in a virtual fifty-fifty timeshare last season in the games where Mark Ingram was inactive, which looks to carry over with Ingram now in Houston. Dobbins getting a leg up this summer could prove very valuable at the beginning of the season where Baltimore has their best matchups. He will encounter teams that gave up an average of 22.5 fantasy points per game. The Ravens matchups get much more difficult as the season progresses especially facing defenses against the run. While I may start finding Dobbins on more of my rosters as we approach the season, I will absolutely be looking to trade him if I see any frustrated Saquon Barkley or Aaron Jones owners, both of which have tough starts, and in Barkley’s case, a possible easing into the season.

A week ago, Darrell Henderson was looking to be the backup for the Rams, but an early training camp injury to star rookie Cam Akers thrust him into what appears to be the starting role. Henderson will be entering his third season where he has never topped more than 140 carries in a year. The situation surely looks to be enticing especially if the Rams do not sign another running back in the next few weeks. While the opportunity may be there, the opening slate of games looks very troubling as the Rams open with matchups against the Bears, Colts, Buccaneers, and much improved Cardinals. Those four defenses only allowed an average of 16.4 points per game to opposing running backs in 2020. While it’s a tough early schedule for Henderson, his entire season outlook is much more promising. The Rams’ schedule really lightens up starting in Week Seven where he will face a nice two game slate against the Lions and Texans. While I am recommending fading, or tempering expectations, on Henderson early in the season, he may be an excellent trade target for frustrated owners in your league as he approaches those midseason matchups.

A tale of two halves doesn’t seem to be in the cards as much for new Falcons running back Mike Davis. The Falcons’ early season schedule has the third most difficult strength of schedule against teams giving up points to the running back position. The Eagles, Buccaneers, Giants, and Football Team only allowed 16.3 points per game to running backs with the Football Team and Buccaneers allowing under 15 points per game. They follow their opening games with the sixth most difficult strength of schedule against the run for the rest of the season. Davis had the best season of his career in 2020, finishing as a top twelve running back in points per reception leagues. He was aided greatly by the absence of Christian McCaffrey in Carolina’s backfield. He will be going to an offense with the Falcons who does throw the ball a tremendous amount. Quarterback Matt Ryan lead the league in passing attempts last season and was within the top five the two years prior. Sadly, the Falcons lead running back only has a 7.8% target share on average over those seasons. Davis had over a 13% target share last year in Carolina alone. There is hope for Davis in Arthur Smith’s perceived running back favoritism from his days in Tennessee but let’s be frank: Mike Davis is not Derrick Henry. A combination of strength of schedule on a historically pass-first team has me moving away from Davis, especially to start the season.

David Montgomery had an excellent 2020 season finishing as the fourth-best running back in PPR leagues. He improved in every single statistical category from his 2019 rookie season, which is absolutely what you want to see. His role did increase following the week three injury to fellow Chicago back Tarik Cohen, but the major difference was in the receiving game where his target shares more than doubled. The news of Cohen starting this season on the PUP list means Montgomery may just pick up where he left off. However, Week One may be a time to either look elsewhere for DFS purposes or lower your expectations in seasonal formats. The Rams’ run defense is stout, and they only look to build upon a year where they allowed only 76 rushing yards per game. The following four games of Montgomery’s schedule have three of the ten worst teams against the run. While he may stumble a bit out of the gate, Montgomery should be a solid contributor to your teams through Week Five and beyond.

San Francisco is known to use multiple backs weekly in coach Kyle Shanahan’s system and it can be very irritating at times trying to figure out who the production will be coming from. 2021 may have the clearest vision of who may be getting the work. The 49ers leading rusher in 2020, Jeff Wilson, will be out for at least the first six weeks of the season after undergoing meniscus surgery, Tevin Coleman departed to join former San Francisco defensive coordinator Robert Saleh as he takes over as head coach of the New York Jets, and Jerick McKinnon has joined the Super Bowl 55 bridesmaid Kansas City Chiefs. This leaves journeyman Raheem Mostert, fullback Kyle Juszczyk, Jamycal Hasty, Wayne Gallman, and rookie Trey Sermon in the backfield. The 49ers third-round investment in Sermon paired with the solid play from Mostert last season makes them the pair I’d recommend drafting to see how the situation pans out. We should get a good look as they draw the Lions in Week One who gave up the most points to running backs in 2020. The schedule has its peaks and valleys season long but is rather favorable to start and has the later bright points of great playoff matchups and only one fantasy season meeting with their division rival the Los Angeles Rams. Hopefully, by the playoffs we have a good idea of how their backfield is going to run, but odds are Mostert and Sermon are big parts of it.

Next week we will be covering wide receivers who have great starts to the season and also situations you may want to avoid. As we approach your league drafts, let me recommend you check out Razzball’s site tools created by Rudy Gamble. There you’ll find everything you need to master your draft rooms, project players, and win your fantasy leagues. We are offering a free three-day trial of both our Roto and DFS packages to help you bust through the line of your 2021 fantasy season. My various rankings can currently be found on FantasyPros where the hope is they help you make history in your drafts in 2021 and avoid falling into alternate history and/or science fiction sections of your league’s history page.