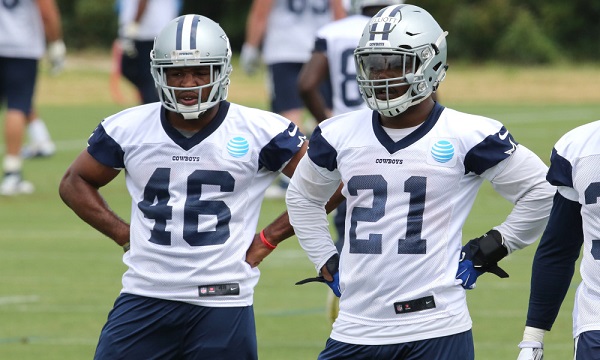 Are you sick of the bye weeks already? For player safety I advocate for two while as a fantasy player zero works. The early games on Sunday were, how do you say, not exciting…Red Zone couldn’t even make them all work as I paused the games around halftime, ran an errand, starting watching again and after a few minutes fast-forwarded (zoom-zoomed is the sound I make when I do it) through way more than I expected to.

There’s no sugarcoating this week, but if someone was selling a coat of sugar, I imagine it’s a 1990s style pullover starter jacket made of blue, purple and pink cotton candy (this Hornets jacket isn’t far off). No major, major injures though a pending suspension is why we have major activity this week. The rest is depth and if the season thus far has shown us anything, loading up on depth now can payoff later. We’re playing with one hundred real (not real) Free Agent Auction Budget dollars, let’s do some bidding!

Alfred Morris ($31) and Darren McFadden ($31) – Better to have them both but I’d rather have neither as no one really knows who is going to start and then what if it’s a timeshare??? So bid what you have to if you really need RB help and unless LeVeon Bell gets hurt (note to self: it never hurts to add James Conner, alright?) there doesn’t appear to be a guy worth adding that will have as much impact as either of these guys, I just wish we knew which one!

Alex Collins ($17) – He’s splitting time with Buck Allen while appearing to be the better pure running back, and with Terrance West’s calf injury continuing that’s one less mouth to feed. Problem is, the Ravens aren’t good.

Silver (Nope, USMNT not getting a Silver in the World Cup)

Orleans Darkwa ($11) – Fantasy team name possibilities are opened up adding him to your squad; He’s had opportunities before and has done squat with them, though coming off a 117 yard day is better than coming off a day (c’mon Giants, play Gallman!) so I’m a little biased, too.

Matt Breida ($11) – He’s a part of the offense even with Hyde, and Hyde isn’t the healthiest of players.

Bennie Folwer ($9) – Saunders is out for week seven and Fowler just saw eight targets though his QB is Semien while the Broncos do have a very promising next four weeks for passing; maybe let’s just get Demaryius back to where he should be and I’ll be happy.

Roger Lewis ($7) – Someone has to catch passes from Eli.

*All the following are [Insert starter name here] gets hurt or isn’t healthy:

Matt Forte ($2) – It’s Bilal Powell’s show if/when healthy and McGuire is also going to play; as a Bears fan during the Forte years I’m sad for him. No one said he had to sign with the Jets though. That’s his bad.

Samaje Perine ($2) – Rob Kelley should be back. Also Chris Thompson looks better every week, or maybe it was just this week and the 49ers are not great.

Dion Lewis ($2) – How many running backs from the Patriots can we own?

Teddy Bridgewater ($2) – Most likely won’t be back until after Week 9, but why not take a chance a few weeks in advance?

$2 Defenses: Here’s where I might even go $3 this week on Buffalo if they were dropped before their bye; they play Tampa then Oakland at home, next on to the Jets then back home versus New Orleans. Set it and forget it for four weeks. I like Philadelphia as well for a few weeks with three straight home games against Washington, San Francisco and Denver. Also the Titans at Cleveland because Cleveland.

Lastly for a buck consider Corey Davis and Mike Williams. Davis may return sooner rather than later (and after their bye) so he’s a guy to keep an eye on, but he was a top ten pick. Williams is also coming off injury but the season isn’t even half over, and they’re high upside guys going into the later weeks. Hopefully you all out there with 1-4 teams pulled out a win this past week; I didn’t in the one I was in, but I’m not giving up; stranger things have happened. Keep on keeping on!