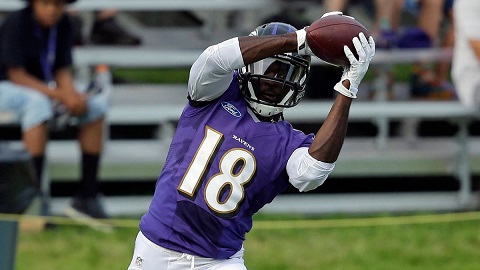 Welcome everybody to this week’s edition of “I’m Sorry Guys”, our recurring series here at Razzball where I apologize for not being in the comments for last week’s article and for not doing my normal weekly opening paragraph due to major life events. This week, I’ll talk about how I didn’t write the usual lede because I just got engaged this past weekend, and nobody bothered to tell me that planning a wedding is pretty much a second full-time job. How’d I get engaged, you ask? Well, it was a dreary Saturday in Central Park… *answers call from Jay* I’ve been informed that this is actually another installment of Deep Impact, and also that nobody cares how I got engaged (that’s pretty rude, Jay, but thanks for responding to the questions last week). Let’s jump right into these names, folks.

Breshad Perriman (WR, Baltimore Ravens, 3% owned) – Well, the Ravens’ team-building strategy of only starting receivers that qualify for Medicare is backfiring, as Steve Smith is unlikely to play this week and Mike Wallace is wearing non-contact jerseys due to a rib injury. At least the Medicare coverage should help the team pay for their recovery. These two being banged up opens the door for Perriman and Kamar Aiken to make a bigger impact in the offense, but between the two I like Perriman more. He’ll likely be the starting receiver in Smith’s place, and had two more targets than Aiken last week. Perriman is still a raw player who had a couple of big missteps against the Redskins (a dropped deep ball and a potential game-winning catch in the end zone where he didn’t get both feet in), but the team sounds committed to keep feeding him the ball. It’s not like they have better options, especially given how poorly Aiken has played this year. Joe Flacco throws an elite deep ball, and I’m willing to gamble that Perriman will come down with one or two of them this week against a not-great Giants secondary.

Zach Zenner (RB, Detroit Lions, 0% owned) – No, I’m not still hungover from this past weekend’s festivities. Yes, I am plugging a running back who just gained nine yards on seven carries last week, a performance so pitiful that the Lions just went out and signed Justin Forsett off the scrap heap. Look, as you’re aware if you’ve been following this series, these names aren’t always going to be pretty. However, if you’re really scrambling this week for RB help, keep in mind that the Lions have a much friendlier matchup this week against the Rams than they did last week against the Eagles. That’s not a misprint. The Rams so far this season have the 9th worst per carry average against the run, and the 5th worst total rushing defense (the Eagles are the 12th best and 3rd best, respectively, in those categories). And, unlike most weeks for the Lions, they actually come into this matchup without looking like they’ll need to throw it 60 times in order to have a prayer. I know Forsett is there now, but I doubt they’ll be able to get him up to speed fast enough for him to have a large workload this week. I think Zenner will get 10-15 touches as well as goal-line work, which is enough to make him start-worthy for the most desperate players.

Vernon Davis (TE, Washington Redskins, 1% owned) – Stop me if you’ve heard this one before: Jordan Reed isn’t likely to play this week thanks to a concussion. Well, don’t actually stop me, I have the rest of the article to finish. Reed hasn’t been officially ruled out for Week 6 yet, but the odds of him being cleared this quickly after entering the protocol for his sixth concussion are pretty slim. I’m hopeful for his personal well-being that he’s healthy enough to return, but Redskins fans and fantasy owners have to be concerned that given his history, this isn’t a short-term problem. In the meantime, VD is back on the fantasy radar. The fantasy radar had been to several doctors trying to get rid of VD, so it is pretty disappointed with this development. Now, with that low-hanging fruit out of the way, we can mention how Kirk Cousins has been relying pretty heavily on tight ends this year. Of course it helps that Reed was the best receiver on the team, and Davis obviously will not replicate his numbers, but in this season’s tight end desert, Davis could be a welcome oasis to players who have been getting weak production from the position.

Cordarrelle Patterson (WR, Minnesota Vikings, 2% owned) – In old Jewish lore, there’s a story about an angel guiding baby Moses’ hand into a piece of hot coal instead of picking up a piece of gold that would have signaled a prophecy of Moses’ eventual uprising against the Pharaoh. Had he picked up the gold, the Pharaoh would’ve had him killed. I am your Jewish angel, fantasy gamers, and I am here to guide your hands onto the burning coal that is Patterson’s flamed-out career. Of course, there isn’t much gold to be had here in the 2% ownership range, but Patterson has been slowly emerging from the ashes and putting together some useful numbers. Last week, with Stefon Diggs out, Patterson saw 61% of the team’s snaps, second most at receiver behind Adam Thielen (5% owned, 92% of snaps, and also is worth rostering). His four grabs for 39 and a touchdown aren’t nearly as impressive as Thielen’s breakout day, but he had only two less targets and was heavily involved. Charles Johnson has fallen out of favor and Laquon Treadwell never had it to begin with. Even when Diggs comes back, Patterson and Thielen appear to have carved out roles for themselves in the surprisingly mediocre Vikings offense. They’re worth the lottery tickets to see how it shakes out when Diggs comes back to the lineup.

Eric Decker (WR, New York Jets, 61% owned!!!!) – I promised myself that I wouldn’t cover injured players here because they are obvious drops, but wow was I floored to see Decker’s ownership percentage this high still after the news broke that he’s having season ending surgery. If you’re reading this article immediately after waking up from a several-day coma, please go and drop him. Also notify your family that you’re awake and feeling well enough to read fantasy football articles.

Golden Tate (WR, Detroit Lions, 71% owned) – I will admit to some hypocrisy here as I am holding onto one Tate share on the off chance that he’ll really do it this week, as has been repeatedly promised. Friend of the blog Jim Bob Cooter has been predicting breakout weeks for Tate all year and they have yet to arrive. If your season is on the brink of being over, drop him for someone who is actually performing. At this point, stashing him is purely a luxury that teams at the top of the standings can afford to take. Chances are, if you drafted Tate, you’re not at the top of the standings and need to move on. If you’ve got any questions on who to drop Tate for, or how to celebrate once he’s off your roster, feel free to drop them in the comments and I promise that I will actually answer this time.