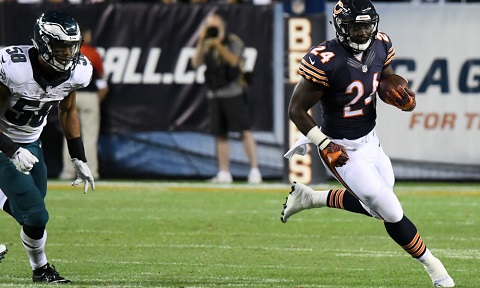 If you have been following our weekly Handcuff Reports and reading them carefully (as I am sure you have been), you may have noticed this little gem that I wrote last week:

“After pass-catcher Ka’Deem Carey went down with a hamstring injury, Jordan Howard entered the game and actually looked pretty good. If Langford continues to struggle, look for Howard to get some more chances. If you are in a deep league, add Howard to your watch list.”

Well, I hope you skipped the watch list and went right to adding him on waivers. And if you did, if you were the person in your league who pulled the early trigger on Jordan Howard thanks to reading this article, then you had a really good Monday. You probably woke up on Monday morning, checked your league news and your team (I am assuming here that no one bothered to watch most of that beatdown), and saw the Jeremy Langford injury news. Then you probably took a sip of your coffee, sat back, smiled, looked at the rest of the teams in your league and said:

Okay, now that we got the world’s longest Get Him to the Greek reference out of the way, let’s get back to business. Jeremy Langford left this week’s game against the Cowboys early and did not return, and it has since been reported that he has a severe high ankle sprain and could miss up to six weeks. After Langford left the game, Jordan Howard rushed for 45 yards on nine carries (5 YPC) and added four catches for 47 yards. With the aforementioned Ka’Deem Carey also nursing an injury of his own, Jordan Howard could be in for a full workload for the next six weeks. And if he has success in Langford’s absence, he could very well take the starting job or turn this situation into a timeshare. Even if Carey comes back quickly, he will be the receiving back on passing downs, while Howard should get the start and the majority of the touches. Jordan Howard is going to be one of the most-added players on waivers this week, so get your claims in before Thursday morning. But, alas, this is the Handcuff Report and not just the Jordan Howard report, so let’s get to the rest of the league!

While we already touched on the Bears and their running back situation above, the Eagles saw a rookie running back of their own get a shot and make the most of it on Sunday. Starting running back Ryan Mathews left the game in the first quarter and did not return, and Wendell Smallwood ended up running for 79 yards and a touchdown on 17 carries (4.6 YPC). But there are two causes for caution before you rush to the waiver wire and make Smallwood a priority:

Staying in the NFC East, the Giants have some running back injuries of their own. While filling in for the injured Rashad Jennings, who missed this week’s game with a thumb injury, Shane Vereen tore his triceps and was placed on injured reserve. Orleans Darkwa saw 11 touches in the game and had some success, but with Jennings expected back possibly as early as this week, Darkwa is not likely to have fantasy relevance going forward. Even though Vereen is out, Bobby Rainey, and not Darkwa, is going to step in as the pass-catching back. The Giants also face a gauntlet of tough run defenses the next several weeks.

One of the bigger questions heading into Sunday was which Panthers running back, Fozzy Whittaker or Cameron Artis-Payne, would be the most productive and get the most touches. They split their touches nearly 50/50, with Artis-Payne getting more rushes and Whittaker getting more catches. Neither had much success against the Vikings defense, though.

See above, only substitute Jerick McKinnon for Fozzy Whittaker and Matt Asiata for Cameron Artis-Payne. Neither had much success, also just like what talked about above, but McKinnon is the better play going forward.

The good news for Isaiah Crowell owners is that he looked pretty good once again. The bad news is that Duke Johnson looked as good or better and had the exact same number of touches (15). Crowell is still clearly the guy for now, but it is unfortunate for his owners to see the backup playing so well and stealing touches. Crowell is still an RB2 for now, and Johnson is a borderline flex at best (and maybe not even), but we should keep an eye on the touches and production going forward.

Chris Ivory returned to action this week and promptly rushed for 112 times for 14 yards, for a blistering 1.2 YPC. T.J. Yeldon didn’t do much better with his eight touches. The Jaguars are hot garbage right now, and you probably shouldn’t start either of these backs until this team starts to look like they are going to turn things around.

If the Jacksonville Jaguars are hot garbage, then the Miami Dolphins are canned tuna left out in the Florida sun all day. Yes, you’re right, they did hang on to beat the mighty Browns on Sunday. They’re awesome. Anyway, Arian Foster is out with a groin injury, some poor desperate souls grabbed Jay Ajayi off waivers. And if adding Ajayi wasn’t sad enough for fantasy owners, news came out late that the Dolphins were actually going to start Kenyan Drake. From there, it didn’t get any prettier. Drake and Ajayi shared the backfield with Isaiah Pead and Damien Williams. Stay away.

Melvin Gordon got all but two of the 22 touches given to Chargers runnings backs, but he didn’t do much with them. His four catches for 43 yards were fine, but his 35 yards on 16 carries (2.2 YPC) was not promising. Luckily for owners, he did punch in a touchdown to salvage the day. Dexter McCluster caught two passes but was otherwise a non-factor. He does not appear to be any kind of Danny Woodhead-type threat to Gordon in the short term. Gordon also goes up against a Saints defense that got absolutely gashed on Monday night by Devontae Freeman and Tevin Coleman, so he is a solid play.

Week three was also the last week that owners were able to roll DeAngelo Williams out there, as  Le’Veon Bell is set to return in week four. And so maybe it was fitting that he dropped a dud on owners in his last week. At least now they won’t miss him as much.

Unlike week two, week three did not see many significant injuries to prominent running backs. Other than Jeremy Langford and Shane Vereen, the only other injury of note was Thomas Rawls, who is supposed to miss a few weeks with a hairline fracture in his leg. So, the Christine Michael show rolls on in Seattle.

The waiver wire for running backs should not be the feeding frenzy that it was last week, but you will likely need a high waiver position if you want to be able to grab Jordan Howard. If you can’t grab Howard or maybe Duke Johnson, the other options are all mostly grab-and-wait guys like Wendell Smallwood, Orleans Darkwa, or someone like DeAndre Washington or Jalen Richard from the running back pile in Oakland. And at that point…see Get Him to the Greek reference above.