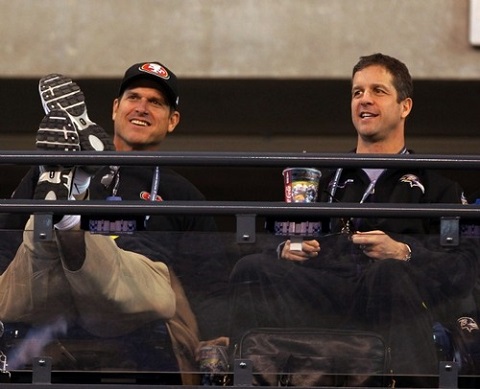 Yes, it happened. And even though these games don’t mean anything, this epic showdown was hyped as “Harbowl 3”, letting us know that the terrorists, in fact, have won. But if there’s anything the NFL is good at, it’s hype. And also having zero self-awareness. That also tops the list. So the hype-train arrived with much fanfare last night, which is why we got to watch Denver fans boo the sh*t out of the team that destroyed them in the Super Bowl. But for fantasy, is there anything to be gleaned here in the first set of preseason games? What is gleaning, is the question here. GLEAN ME, right? Oh yes, I shall glean you. So the answer? Probably not much. And if you watch Patriot preseason games, nothing. For example, I could say that Jay Gruden’s usage of Roy Helu against the Patriots was notable, especially for PPR formats (something I actually believe). But is that usage a function of the games not counting? And what do we make of long-sustaining drives, like the first drive the Ravens had? Does it tell us their offensive line looks better and they have a more cohesive unit overall, or is it just rust and the first time these players are live-tackling? There are just way too many unknowns here, and so really the only thing that you should monitor are injuries and Brandon Weeden sightings. Just kidding on that last one. You should actually monitor your alcohol intake. Or maybe that’s just me.

In a barn-burner of epic proportions, this game had exciting written all over it. Until someone realized they made a terrible mistake and dumped white-out on the whole thing. Much of the game stayed at a 10-10 tie, which put me into phases of stigmata. Michael Vick (3 of 6, 17 YDS, 3 CAR, 19 YDS) led the only touchdown drive of the game as Geno Smith (4 of 6, 33 YDS) looks to retain his starting job. I wouldn’t worry, even if Vick is the week one starter, that just means Smith will take over for his eventual week three injury. Andrew Luck (4 of 5, 53 YDS) looked good, despite still looking like Hodor.

No, I’m not going to call it that… putting it in the title made my ears bleed enough, so deal. In his only series, Joe Flacco (4 of 5, 52 YDS) showed eliteness (something he rarely does for being so elite) by marching 80 yards down the field. I’m not ready to anoint the Ravens offense “capable” of anything quite yet, but Kubiak could definitely make the pieces work. A less atrocious offensive line would probably help too. Colin Kaepernick (1 of 1, 17 YDS) had his own solid drive for 66 yards leading to a field goal. And lastly, Carlos Hyde (5 CAR, 39 YDS) looked ready to take over Frank Gore’s spot on the depth chart, and while you shouldn’t read into anything  from last night’s game, the transition could take place sooner rather than later. And that’s all I have to say about this game. Really, the GIF could have carried the entire post.

I would love to write endless amounts of content on Ryan Mallet and Jimmy Garoppolo, but there is such a thing as too much fun. As what Bill Belichick is prone to do, only 9 of the 22 projected starters appeared in the game. Danny Amendola and Rob Gronkowski were out, because of course, but I’m sure they figured out interesting ways to land on the IR regardless. Both Robert Griffin III (2 of 4, 9 YDS) and Alfred Morris (5 CAR, 27 YDS) looked good. Then again, just the fact that RG-III is walking would classify as good at this point.

With Kansas City’s defense already in triage-mode, (and keep in mind, this is before any actual game took place) the scoring bonanza wasn’t exactly a surprise. But Andy Dalton (3 of 5, 71 YDS) looked good, more ginger than ever as well. Probably that red sheen from getting a 115 million dollar contract. Probably a slight overpay, as I verified that my local grocery store only charges 2.99 for ginger. Alex Smith (3 of 5, 19 YDS) looked very Alex Smith-ish, and Andy Reid looked hungry. He would have eaten his timeouts, but he called them already.

Ryan Mathews (5 CAR, 19 YDS) looked sharp and explosive (despite a fluky goal line fumble), and based on my insane ranking, he better. HE BETTER. The offense was clicking in the no huddle, and did I mention Ryan Mathews looked sharp and explosive? (Also what happens the morning after eating four lobsters.) Danny Woodhead (2 CAR, 10 YDS, 1 REC, 25 YDS) had plenty of grit prepared, Philip Rivers (4 of 4, 61 YDS) had another bakers dozen of children made, adding some more numbers to his harem. And with Antonio Gates out, Ladarius Green (2 REC, 26 YDS) continued to show flashes that you can try and use to justify your overdraft. Then again, this is the Dallas Cowboys, excuse me, “America’s” defense we’re talking about here… just to save time, refs should just allow the opposing team to start in Cowboys redzone every single possession. I refuse to talk about Brandon Weeden, so with Gavin Escobar, I will admit, I’m not sure what kind of impact he’ll have this season, but he could show us something. Then again, I’m basing this all on one caught pass, so nothing to see here. Move along.

Judging by what I saw at the beginning of this game, Ray Rice would have gotten a longer suspension if he’d committed lightning. After the 46-minute delay, we saw Peyton Manning (10 of 13, 78 YDS) be Peyton Manning, with Demaryius Thomas (5 REC, 52 YDS) being a direct benefactor. There was also a SURPRISE! underwhelming Christine Michael (7 CAR, 16 YDS, 1 TD), along with a Tavaris Jackson sighting. Only to remind us that Jackson has as many Super Bowl rings as Peyton Manning. LOL.