Right now, Andrew Luck has a higher ADP than every quarterback except Cam Newton and Aaron Rodgers. Look, I get it. The Colts have no run game and they rely on the pass which is why Luck is so high on everyone’s board. But I fell into this trap last season and I’m not falling for it again.

My main concern is that people are drafting Mr. Luck over Russell Wilson. Or should I say, Dangeruss Wilson? 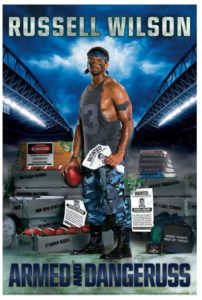 In all honesty, I hate Russell Wilson. He’s a total meathead and he’s got a smokin’ hot girl which only makes things worse, because they are super cliquey together. But the truth is, on the field, he is Dangeruss. So Russell, you can continue to do whatever you want off the field (like these Armed and Dangeruss photoshoots), as long as you win me fantasy football championships, fair?

Anyway, I am a huge dual-threat QB homer. I love guys that can actually move out of the way and make something happen when a 300-pound man is chasing after them. And I am not saying Andrew Luck can’t move, because he can. What I am saying is Russell Wilson is a lot better at moving that Andrew Luck is.

Not to mention, Andrew Luck is coming back from a lacerated kidney and all anyone can talk about is how Dangeruss doesn’t have an offensive line. (I don’t know what a lacerated kidney is and, quite frankly, I don’t want to know.)

I’d like to start by saying Andrew Luck’s numbers were just disgusting last season. For starters, he threw 15 interceptions in the seven games that he played. My boy Russ on the other hand threw eight. Oh, and did I mention that Wilson played in all 16 football games? To add to that, Wilson completed 68 percent of his passes and Luck only completed 55 percent. I’m pretty sure the quarterbacks in 5th grade B-Team football have better completion percentages than 55 percent. (I would know. I was a B-Team player myself. But let’s not bring that up again. It’s a touchy subject. I got snubbed.)

As ridiculous as it might sound, Russell Wilson has 1,000 yards rushing potential. Obviously it’s not likely, but that’s where his ceiling is on the ground. I mean, he went for 850 rushing yards just two years ago. Add in a handful of rushing touchdowns, you are talking about a running back with an arm. That’s what I like to call Dangeruss (I’ve got to stop saying that).

The whole fantasy quarterback situation is a little bit funny this year. There are so many question marks around almost every guy at the top. In years past, it was more clear who the number one guy was and who the number six guy was and so on. So, the best advice I could give you is not getting ahead of the count. There is no need to pick a quarterback too early, especially if that QB is coming off a lacerated kidney.

Quick Question Before You Go…

Would you play a fantasy football league (and pay attention) if no money is involved?