DeMarco Murray is no longer on pace to break the single season record for rushing yards. He is, however, on pace to finish the season with 1,973 yards on the ground. To do so he will have to maintain his average of 123 yards per game. Dallas’s remaining opponents are NYG, PHI, CHI, PHI, IND and WAS. The only team that isn’t giving up at least 100 rushing yards per game in that list are the Colts who fall just below at 98.1 yards per game. The New York Football Giants are ranked the worst in the league giving up a league high 144.7 yards per game. These remaining teams combined are allowing 696.2 yards per game. That’s an average of 116 yards. I don’t see Murray maintaing the 123 yards per game pace, but I could definitely see him averaging 85. That would close him out for the season with 1743 yards which would be the 2nd most in a season in the last 5 years behind Adrian Peterson who racked up 2097 yards in 2012. His current pace has him at 390 carries for the season. That number concerns me…

Arian Foster is averaging 102.7 yards per game so far this season and is headed for 1,541 for the season. That would be 457 yards better than last year’s prorated value in which he averaged 67.8 per game. In the 8 games he played in 2013 he managed only 1 rushing touchdown. He is on pace for 13 this year. I’m sure owners that drafted him and stuck with him are rather happy with his 2014 production.

Marshawn Lynch in just about on the same pace as last year and seems a safe bet to continue his 76.6 yards per game for the Seahawks’ remaining 7 games. Thanks to his 4 touchdown game last week his is on pace for a 16 rushing touchdown season. Wouldn’t that be nice!

Easily the most surprising member of the top 10 in rushing yards this season is Justin Forsett. I heard it was him who made sure the Ray Rice video saw the light of day. Not really, but it did provide him with the opportunity to shine. Averaging 72.2 yards per game, Forsett is on pace for 1,154 yards and 8 TDs, making him perhaps the most valuable player to be grabbed off of the waiver wire in 2014.

How about some backs that are on pace for disgrace. Doug Martin is on pace for a 398 yard season. I called him Fartin Martin in a week 2 write-up and I couldn’t have been more spot on. Sianara loser. Not far behind is Zac Stacy who is averaging 32.1 yards per game. Maybe his name is really Stacy Zac! How about CJ-Half-K who is staring at a 576 yard season averaging 36 yards per game.

Preseason darlings LeSean McCoy, Jamaal Charles and Eddie Lacy have not proven worthy of their first round price tags. Charles is averaging 66.6 yards per game and is on pace for 999 yards. His 11 rushing TD pace is nice, but hardly enough to warrant being a top 3 running back. LeSean McCoy had a horrible start to the season. At the 4 week mark he was on pace for 768 yards. He is currently on pace for 1,140 yards with a per game average of 71.3 yards. That’s better, but certainly not first round material. And what about Lacy? While he clearly hasn’t been Eddie Money I think he has a good chance of finishing off the season strong, or at least stronger than his first 10 weeks. Lacy is averaging 53.1 yards per game but his remaining opponents have combined to allow an average of 107 yards per game. Sounds like a good opportunity for him to redeem himself. Or at least try.

Which running backs of value have fallen off their pace a bit since week 4? Le’Veon Bell was averaging 94.5 yards per game but is now at 74.7 per game. Alfred Morris has dropped from 79 yards to 67.3 yards per game. Chris Ivory has lost 13.6 yards from his per game pace and while DeMarco Murray’s per game average is down 10.2 yards he is still averaging 123.3 yards per game.

How have running backs lived up to their preseason Razzball projections? DeMarco Murray, Mark Ingram, Arian Foster, Jerick McKinnon and Denard Robinson have smashed their rushing yard projections. McKinnon and Robinson are obviously due to unexpected opportunity with Toby Gerhart sucking and Adrian Peterson beating his way the commissioner’s exempt list. Doug Martin, Zac Stacy, Eddie Lacy, Toby Gerhart and Reggie Bush are among the names that have fallen far short.

But what about the most important stat for fantasy players? The fantasy point. Who is the running back MVP? In PPR formats that honor would go to Matt Forte, who is on pace for 369.8 points. DeMarco Murray and Arian Foster take silver and bronze with 351 points each. In standard formats the top back is Arian Foster with 302 points. Marshawn Lynch is at 294 and Murray is at 293 points.

After 4 weeks Demaryius Thomas was on pace for 752 receiving yards with an average of 47 yards per game. Fast forward to today and he is now on pace for a league leading 1,781 yards which is 351 more yards than 2013. His per game average has increased to 111 yards since week 4. Now that’s letting the law of averages run its course. I hope Thomas owners didn’t sell low when they had the chance!

With 7.8 receptions per game Antonio Brown is on pace to lead the NFL with 126 catches. That would be the most catches in a season since Marvin Harrison caught 143 back in 2002! While he is at it, Brown is also on pace for 1,712 yards in the air, falling just behind Demaryius.

Anyone else averaging over 100 yards per game? You bet your pass catching ass there is. Coming in at number 3 is a wide receiver from Indianapolis who is hauling in 104 yards per game from quarterback Andrew Luck. His name is T.Y. Hilton and he has emerged as a solid WR1 this season. Now, back to the countdown. At number 4 we have a player that has pounced all over the opportunity when Calvin Johnson missed time. With 101 yards per game, Golden Tate is leading the charge in the air in Detroit. Who said Lions can’t fly?

A player I’d be remiss if I neglected to mention that has greatly surpasses preseason expectations is another one of Peyton Manning’s favorite targets. Emmanuel Sanders is on pace for 110 receptions, 1,515 yards and 10 touchdowns. Yes please! And while I am mentioning breakouts, how about DeAndre Hopkins who is on pace for 1,216 receiving yards.

Far be it from me not to mention the letdowns. With a game average of 55.1 yards and 4.7 receptions, Brandon Marshall is staring at the worst season of his career in both categories. Prior to this season he had a career average of 80.7 yards and 6.4 catches per game. Coming into 2014, Wes Welker has averaged 7 catches per game. This season he stands at 3.7. I guess with guys like Demaryius Thomas, Emmanuel Sanders and Julius Thomas in front of him there are a lot of bigger mouths to feed in Denver.

Here are a few other pass catchers that have pleasantly surprised fantasy owners this season. Despite a drop in average of 34 yards a game since week 4, Steve Smith Sr. is on pace for 78 receptions and 1,165 yards. Mohamed Sanu is looking at 73 catches and 1,152 yards and Anquan Boldin, 91 receptions and 1,129 yards.

Since week 4 DeSean Jackson is now averaging 35.2 more yards per game. Larry Fitzgerald is averaging 33.3 yards more per game. On the other hand, Jordy Nelson is down 15.8 yards and Julio Jones is down 16.8.

Which receivers have out produced their receiving yards projections? Mohamed Sanu by 781, Golden Tate by 741, T.Y. Hilton by 645, Emmanuel Sanders by 614 and Jeremy Maclin by 568. On the flip side, Michael Floyd, Brandon Marshall and Kendall Wright have been major disappointments falling at least 400 yards below expectations.

And lastly I’d like to close with a player whose name sounds like he could be the lead in Gladiatior Part 2. In just 4 games played this season he has 14 receptions, 310 yards and 6 touchdowns. He is on pace for 15 touchdowns, but expanding those numbers over a full season, Martavis Bryant would be on pace for 64 catches, 1240 receiving yards and an astounding 24 touchdown dances. Put this man in the Colosseum and all he will do is catch touchdown passes. 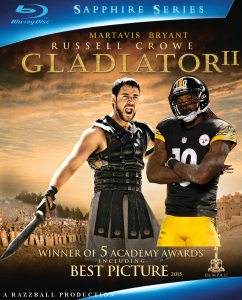 I have attached the full spreadsheet of stats for you to examine yourself. I encourage you to take the time a review them… (On Pace Spreadsheet)

Please note that all on pace stats are calculated based on the number of games each player has played and the number of games remaining in their schedule. All columns labeled with a “+/-” are the stats they are on pace for this year as compared to their 2013 stats. All 2013 stats are prorated for a 16-game season to ensure a fair comparison. Any columns labeled “Proj” are the expected stats for that category for the remainder of this season. Column labels that begin with “Razz” are the preseason Razzball projections. This column will be followed by a “Razz +/-” which indicates how far above or below the on pace numbers are compared to the projections.